3. Some ramifications of the Sylvester-Gallai Theorem

In using the ideas above we have freely used properties of Euclidean geometry. Note that we were not explicit about the "plane" that the Sylvester Theorem holds in. We do have to be careful, because the result does not hold in the finite projective geometry known as the Fano Plane (or Fano Configuration) shown below.

This plane with 7 points and 7 lines has exactly three points on each line. However, one line looks "peculiar." It is the line L6 in the diagram and contains the three points P2, P6, and P7 which is shown as a "circle" above. It follows from the Sylvester-Gallai Theorem that no matter how we might try to position 7 points in the Euclidean plane so as to lie on 7 lines as in the Fano configuration, we can not succeed!. The Fano plane is named for Gino Fano (1871-1952), the Italian geometer who pioneered the study of finite geometries and point configuration and whose two sons (one, Ugo, a physicist and the other, Robert, an engineer) had distinguished careers in the United States. 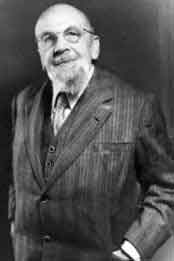 Convince yourself that if the Fano configuration could be embedded in the Euclidean plane with 7 points and 7 three-point straight lines, the drawing would violate the Sylvester-Gallai Theorem.

Part of the reason that Sylvester-Gallai ideas are widespread is because the statement from Section 1:

If a finite set of points in the plane are not all on one line then there is a line through exactly two of the points(*),

can be thought of as holding in the Euclidean plane or in the real projective plane. (We saw above that the theorem need not hold in finite projective planes.) Because the usual axioms for a projective plane have the property that if one interchanges the words "point" and "line" in the axioms one gets the same axiom set back, it follows that there is a duality principle for projective planes. Duality refers to the fact that when, in the statement of a theorem, the words "point" and "line" are interchanged, then one gets another valid theorem. What is the dual of (*)? This is the statement that if one has a configuration of lines and points, not all of the lines going through a single point (i.e. not a pencil of lines), then there is some point that lies on exactly two lines. Such a point is known as an ordinary point. (To state the associated "dual" theorem in the Euclidean plane we have to deal with lines which do not pass through a single point and no two of which are parallel.)

Looking back on the mathematics literature, one can often find work that is related to a question raised previously, even though mathematicians of the day did not realize the significance of that work. There is an ironic example of this with respect to the Sylvester-Gallai Theorem. Even before Gallai gave the answer to Sylvester's problem by answering Erdös' version of the question, another mathematician, E. Melchior, had in essence solved the problem. Melchior was a Nazi and published his work in a journal in which the Nazis did not allow non-Aryans to publish. For this reason and the fact that this journal was not widely circulated outside of Germany during the Nazi years, Melchior's proof of the Sylvester Problem was not noticed. (One must remember not to confuse the message with the messenger. Richard Wagner wrote some wonderfully beautiful music, even if he was not always admirable in his personal life.) Melchior's proof is a combinatorial one which does not use metrical properties of Euclidean geometry and is very lovely.

In retrospect, it is clear that one could easily see that there had to be at least three ordinary lines for any point-line configuration. This follows from Melchior's work. Later it was shown that the number of ordinary points had to grow larger as the number of points in a plane finite configuration grew. Both G. Dirac and T. Motzkin were among those who explicitly conjectured that there would be at least n/2 ordinary points for a set of n plane points. However, it should again be noted that for n =7 and 13, there are configurations for which this bound does not hold. The additional requirement that n be large enough has to be added. It was announced by Hansen that he had a proof that there were always at least n/2 (n > 13), but the proof, unfortunately, had an error. Despite this, there were many correct new results in Hansen's investigations related to Sylvester-Gallai results. The number of ordinary points is known to be at least 3n/7 (n > 2), as was shown by L. Kelly and W. Moser, and the best known result (due to J. Csima and E. Sawyer) is that the number of ordinary lines is at least 6n/13 (n > 6).