In this column I plan to examine frieze symmetries as manifested in woven strips...

The pre-Columbian civilizations of Peru had no written language and, as far as we know, no formal mathematics beyond the still inscrutable recording of information by patterns of knots in strings called quipu. But thanks to their custom of burying large quantities of textiles with their dead, and to the unusual aridity of the coastal area in central and south central Peru, many of their woven, embroidered or painted textiles have been preserved. The intricate symmetries of the decoration bear witness to the pre-numerical mathematical genius of these peoples, and give us a rare window into cultures which were first superseded by the Incas and then extirpated in the aftermath of the Conquest (1532).

Branko Grünbaum (see References, below) has analyzed the Peruvian exploitation of planar symmetries in textile decoration. In this column I plan to examine frieze symmetries as manifested in woven strips, and especially the uniquely Peruvian device of using double- and multiple-weaving to create an additional symmetry between the front and the back of a textile. Some of the textiles I am using as examples can be assumed to date from the "Late Intermediate Period" (1000-1400 AD) and to originate in the central or south-central coast. Adele Cahlander shows several similar examples which are reputably dated and sited. For others (the first and second groups below) I have not been able to find such exact published parallels. They are certainly pre-Inca and from that part of Peru.

Frieze symmetries (the possible symmetries of a 1-dimensional strip of decoration) were completely analyzed (Speiser, Pólya, Niggli, 1924) in the early twentieth century. There are 7 possibilities:

Double-weaving is a widespread technique which allows decoration of both sides of a textile at once. In the most common form, warp-faced double weaving, the warps for a cloth are set up on the loom with two yarns of complementary color in each position. The fabric is woven as usual by leading the weft over and under the warps, but here at each intersection the weft passes over one color and under the other. The result is that the two sides of the fabric bear mirror-image designs in opposite colors.

The ancient Peruvians combined double weaving and pattern symmetry, using color as an extra variable, to achieve symmetries between the two sides of a textile.

Suppose that a strip is double-woven with dark green and orange so that on one side ("recto") it shows the frieze pattern p p p p p p ... . The other side ("verso") will then show b b b b b b ... , i.e. the pattern from the recto, translated one step and reflected.

Here is an example:

This principle was exploited with more complex frieze symmetries:

A singular achievement of the Peruvian weavers (I do not believe this was duplicated by any other civilization) was the production of textiles in which more than two yarns occupy each warp position. In ordinary cloth this is impossible, because one yarn is up, one is down and there is no place for others. The Peruvians solved the problem by using two sets of wefts: at each intersection one warp would go over the top weft, one warp would go under the bottom weft, and the rest would be hidden inside the double fabric so constructed. (In practice, a single weft was led across on the top and back on the bottom; the resulting very sturdy but bulky construction, aptly described by d'Harcourt as "tubular," was only used for belts and straps).

With four colors typically one (usually red) is used as a background color and three others work the design. This extremely complex work was usually reserved for the backstraps the weavers themselves used to maintain tension in their looms. A specimen similar to this example, with the simpler T inside-out symmetry, is in the collection of the American Museum of Natural History 41.2/5104 (shown in Cahlander); another with TVG color-coded front-back symmetry (undoubtedly; Cahlander shows only one side) is in the collection of the Lowie Museum of Anthropology, University of California, Berkeley E13-1-3969.

The pattern in this example is the superposition of two two-color patterns, each with color-coded translation-rotation symmetry: 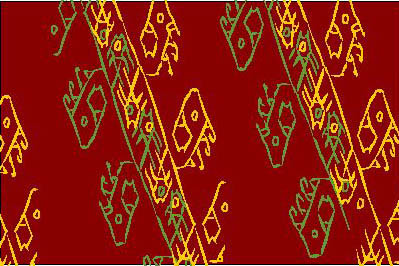 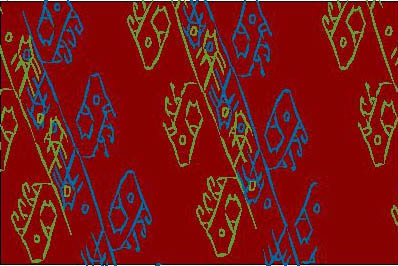