Let us begin with the following example. Suppose we have a county with five cities as in the diagram below. 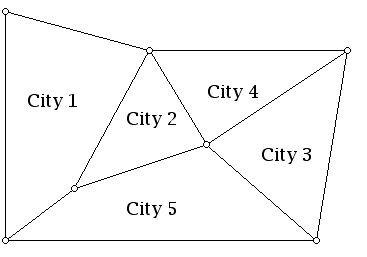 Since the sum of the weights is 18, if half of this number plus 1 is used, the quota for this game would be 10. What are the minimal winning coalitions for this game:? They are: {1, 2}, {1, 3}. {1, 4}, and {2, 3, 4}. Unintuitively, we see that player 5 though having positive weight is never a member of any minimal winning coalition. Player 5 is a dummy. Furthermore, although player 2 has a different weight from players 3 and 4, it seems intuitively clear that players 2, 3, and 4 have the same influence. We see that players with positive weight can have no influence and players with unequal weight can have the same influence. This phenomenon can sometimes be very dramatic. Consider the two voting games below:

It should be clear that in both games all three players have equal "influence" because any two-player coalition is a winning coalition. Even though in the second game two of the players have much more weight, they do not really have more power.

What this example shows is that it is often not easy to tell how much influence or power the players exert by merely looking at the weights of the players in a voting game. Weighted voting illustrates unintuitive/paradoxical behavior as has also been the case with other aspects of voting.