I am particularly interested in visualizing mathematics and giving talks on mathematics and art. Many of my digital works, some of which are made into fabric and wallpaper, are based on photographs of everyday scenes and objects. The "Seeing Symmetry" virtual exhibition at includes more works and details.
— Frank A. Farris, Santa Clara University 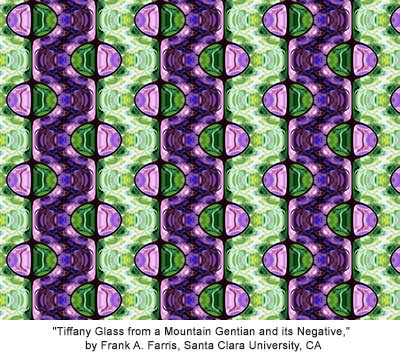 Using a composite photograph of a mountain gentian juxtaposed with its negative to produce an intense contrast of purple with the original green, I used just the right waves to make wallpaper with horizontal mirrors, vertical glides, and 2-fold rotational symmetry. In the notation of the International Union of Crystallographers, the symmetry group of this pattern is pmg, but if we allow color-swapping transformations as generalized symmetries, the larger group is cmm, so this pattern type is called cmm/pmg. 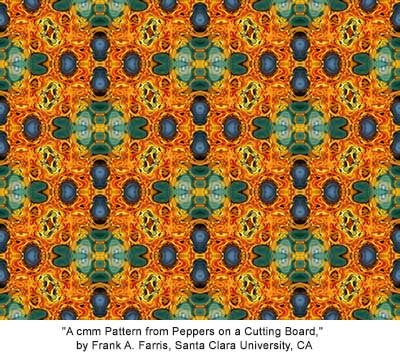 The bright oranges in this cmm pattern come from a photograph of assorted chopped peppers, with collard greens and the glint of the knife as nice contrasts. 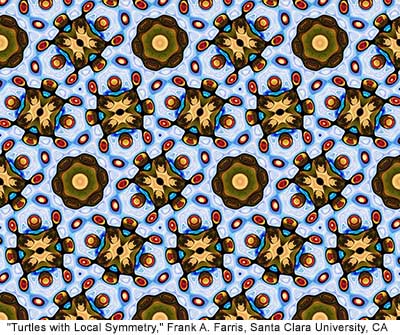 There is no mirror symmetry in this image, only 6-fold rotational symmetry. And yet our eye cannot help seeing symmetry in the turtle shapes. 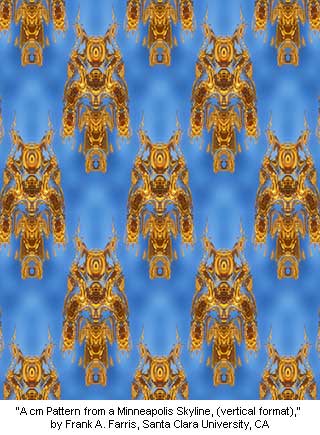 Fantastical samurai appeared when I used a photograph of the Minneapolis skyline on an autumn day in conjunction with wave functions adapted for cm patterns. 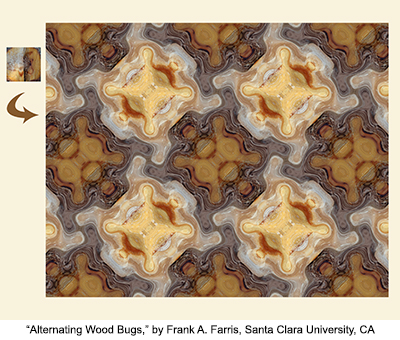 Had I used a source photograph whose colors reverse exactly when you turn it upside down, the image computed with these wallpaper waves would have exact color-reversing symmetry of type p4g/cmm. However, when you rotate my picture of a freshly cut pine stump, the colors only more-or-less reverse. This causes what I call "approximate color-reversing symmetry." The blond bugs marching northwest have the same outlines as the dark bugs marching northeast, but the details of the insides are quite different. 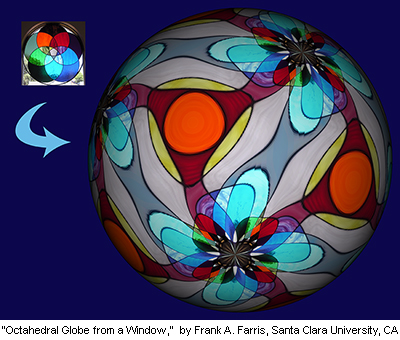 This coloring of the sphere, based on a photograph of a stained-glass window by Hans Schepker, is invariant under the action of the octahedral group. I created it by mapping the sphere (and the group action) to the plane via stereographic projection and using known techniques for creating complex-valued functions invariant under groups that act on the plane. This image is part of a larger work, "Imaginary Planets." 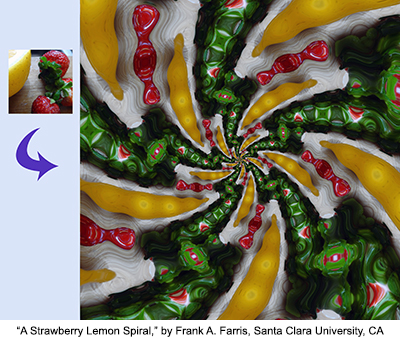 This image started life as a wallpaper pattern with symmetry group p2, based on a photograph of strawberries with a cut of lemon. After scaling it correctly, I applied the complex exponential map to wind it around the origin, creating a spiral of yellows, greens, and reds. I particularly enjoy how the lemon became a string of yellow wax beans, while the strawberries turned into peppermint candies. 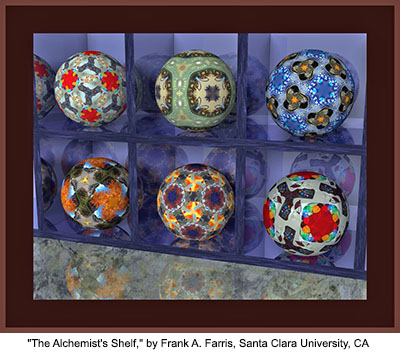 The rich colors of the alchemist's globes come from scenes captured with a camera that records the entire visual sphere. They tell my story of leaving home in San Jose for an autumn sabbatical in Minnesota. At the top left, we see my stairwell at home, where a stained glass window made by Hans Schepker hangs next to a quilt. Moving to the right, we find the glorious Lakewood Chapel and St. John's Abbey. Bright fall colors at the bottom left give way to another view of St. John's Abbey, and then we return home. Texture maps on the spheres use quotients of harmonic polynomials with icosahedral or octahedral symmetry. The scene is composed in Photoshop, with about 14 hours of ray-tracing. 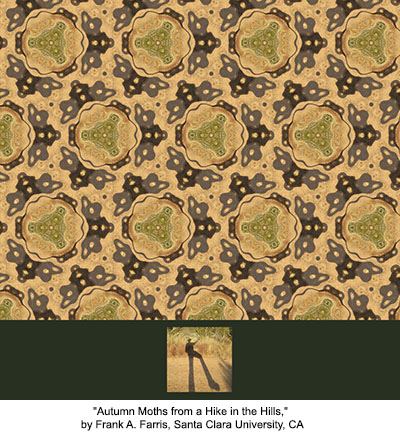 The big surprise about wallpaper patterns is that there are exactly 17 types. After making many examples of each type, I still return to the type of this pattern as a favorite; it?s called p31m. Notice the three-fold rotational symmetry, but also the alternation of mirror symmetry with three-way pinwheels. For me, this gives a beautiful balance of sameness and variation. It?s symmetric, yet organic. I took the source photograph on an autumn day, hiking in the golden hills above San Jose, CA. This piece shows that interesting patterns can arise from photographs with rather limited color palettes. 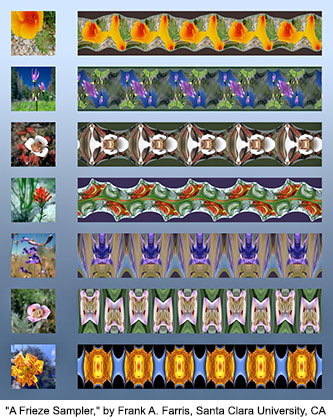 Friezes take their name from an architectural feature: a band of decoration typically along the top of a wall. In the theory of plane symmetry, the first famous classification result says that there exist exactly seven types of frieze patterns. Every pattern ever constructed by anyone, as long as it repeats exactly along one direction, can be classified as belonging to one of these seven types. Mathematicians, like many humans, like to collect exactly one artifact of each type. Here is my sampler of seven friezes, made from source photographs of California wildflowers. I especially like the fourth one down, which exemplifies a glide reflection symmetry?a flip-and-slide motion that leaves the pattern unchanged. 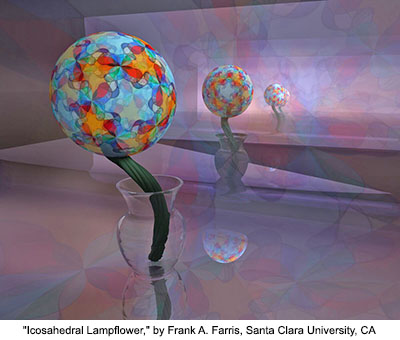 This image tests the limits of ray-tracing, with a virtual lamp inside a partially transparent, icosahedrally painted globe placed atop a pumpkin stem in a crystal vase. Two opposing slightly curved reflective walls create a festival of reflections and projections. The source of the colors is my now-familiar stained glass window. 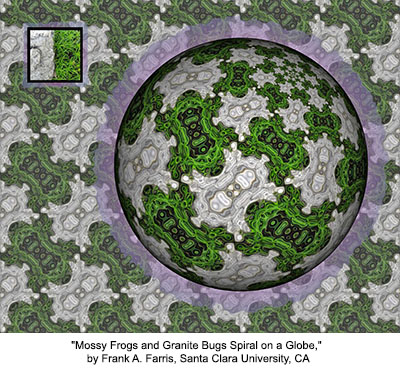 The pattern in the background of this image does not exactly have color-reversing symmetry. The source photograph of granite and moss is only vaguely color-reversing when you turn it upside down: the greens turn into grays. Still, when I used it with a formula that would yield color-reversing symmetry, it led to the two similar-but-different shapes: frogs and bugs. Then I wound the pattern onto a sphere in a spiral pattern. I added the purple haze by hand, using Photoshop. 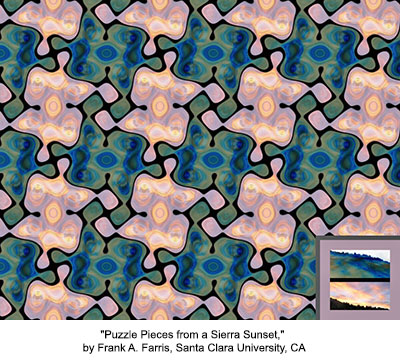 Photographs with rather minimal variation (and artistic value) can turn into beautiful patterns. Can you find the color-reversing symmetry? If you turn the pink puzzle pieces 90°, they match the green ones with the same shapes but opposite colors. The inset at the lower right shows that my source photograph is actually a collage, combining the original sunset photo with its negative, rotated upside down. Again, the black band is considered a neutral color to separate positive and negative colors. 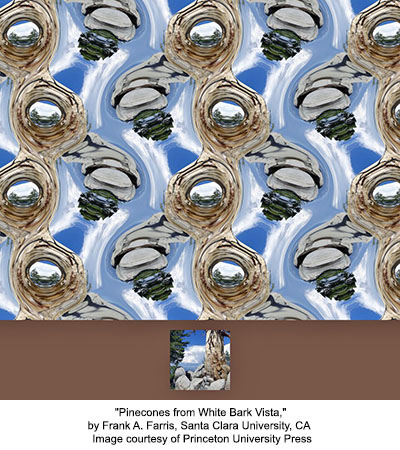 Part of the enjoyment of wallpaper patterns is the way your mind knows how to continue the pattern outside the given frame, in both the left/right and up/down directions. (When mathematicians use the word wallpaper, we just mean any pattern with translational symmetry in two independent directions.) The undulating flip-and-slide symmetry in the up/down direction makes this pattern type one of my favorites. It is symmetric, but not overly so. Here we see alternating axes of glide reflections that are not related by translation. This pattern type is called pg by the International Union of Crystallographers. 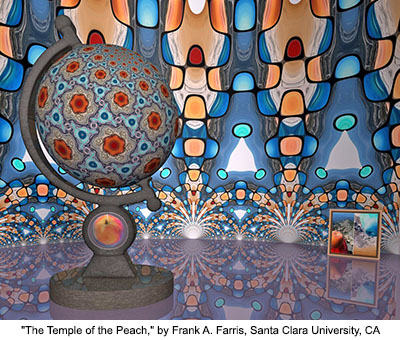 Who visits the Temple of the Peach? My first step in going there was to paste the Hyperbolic Peach pattern that I used to illustrate non-Euclidean geometry around the inside of a cylinder, the temple wall. The giant globe holder with its peach medallion holds a sphere decorated with another pattern made from the same peach photograph, which is propped on the floor. Photoshop allows me to tell that floor that it should be highly reflective. I had to let the ray-tracing software run for a day to produce this scene.