Plimpton 322 in the New York Times 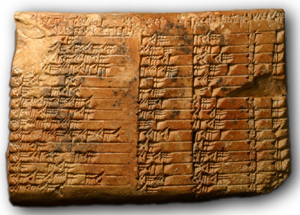 This image appeared in the Times for November 23, 2010. The story, by Nicholas Wade, covered "Before Pythagoras," an exhibition of Babylonian mathematical tablets at NYU's Institute for the Study of the Ancient World (15 East 84th Street; show runs through January 23, 2011). Wade's title is "An Exhibition That Gets to the (Square) Root of Sumerian Math." The Sumerians (c. 5000-c.2000 BC) did in fact develop the base-60 notation and much of the terminology used by their successors. But Plimpton 322 was written around 1800 BC, and the language in the column headings is mostly Akkadian. The exact meaning of the tablet is a matter of scholarly controversy today. Wade comes down on one side of the issue, stating that it "contains columns of numbers that seem to have been used in calculating Pythagorean triples." The "(Square) Root" in his title refers to another tablet in the exhibition, YBC 7289 from the Yale Babylonian Collection. This tablet "is a small clay disc containing a rough sketch of a square and its diagonals. Across one of the diagonals is scrawled 1, 24, 51, 10 -- a sexagesimal number that corresponds to the decimal number 1.41421926. Yes, you recognized it at once, the square root of 2." See Bill Casselman's photographs of this tablet.

... and the Rhind Mathematical Papyrus 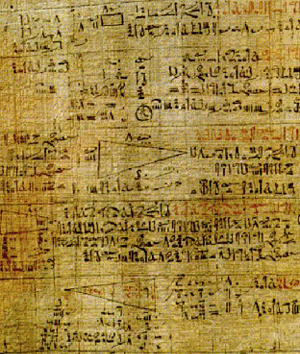 A detail of the picture published in the Times; the full unenhanced image (here) shows about a third of one side of the Papyrus, which is 32 cm wide and 199 cm long. The Rhind Papyrus is dated c. 1650 BC but is a copy of a work some 200 years older. See more of the Papyrus. Image © Trustees of the British Museum, used with permission.

The New York Times Science section on December 7, 2010, devoted to puzzles, included "Math Puzzles' Oldest Ancestors Took Form on Egyptian Papyrus" by Pam Belluck; she traced them back to the age of the Pharaohs, and in particular to a problem on the Rhind Papyrus (the image shows the more photogenic geometry problems). According to Belluck, the problem "contains a puzzle of sevens that bears an uncanny likeness to the St. Ives riddle." (The one that starts: 'As I was going to St. Ives, I met a man with seven wives ...' . Problem 79 on the Papyrus mentions in fact 7 houses, 49 cats, 343 mice, etc., so there is very likely a direct ancestry). The article goes on to survey the other, very few, mathematical documents that have survived from that era: the Egyptian Mathematical Leather Roll, the Akhmin Wooden Tablets, and the Moscow Mathematical Papyrus. This last contains, Belluck tells us, "problems that involve a pefsu, a unit measuring the strength or weakness of beer or bread based on how much grain is used to make it. One problem calculates whether it's right to exchange 100 loaves of 20-pefsu bread for 10 jugs of 4-pefsu malt-date beer. After a series of steps, the papyrus proclaims, according to one translation: 'Behold! The beer quantity is found to be correct.'".

Math and music in three dimensions

Martin Kemp writes on science and art for Nature. On October 14, 2010 they ran "Metallic Music," his account of the installation (Oxford Science Park) of a work by Conrad Shawcross, "a young British artist who is becoming famed for his invention of wondrous scientific and philosophical machines that are usually on a large scale." In fact the work in question, Fraction (9:8) is 14 meters long. The 9:8 is the ratio of two periods combined to make a three-dimensional Lissajous-type diagram, which is then "fabricated by automotive-industry robots" into an "aluminium vortex ... which hangs from wires attached at critical balance points." We learn that the ratio 9:8 appeals to Shawcross because of its instantiation in music: it is the "interval of a major second, corresponding to the note D in the Pythagorean scale." An equally musical and even more mathematical work of Shawcross is Loop System - Major Third 5:4, 4 part Counterpoint, shown here, where spinning lights trace out four parallel copies of the 5:4 torus knot, evoking four staggered voices singing a major third. 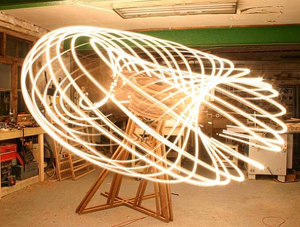 The connection is made by Jonathan Farley, a mathematician who writes for The Guardian. His December 23 2010 column, "The US embassy cables enigma," explains that "there may be a theoretical limit to how quickly you can perform certain tasks called 'NP-complete problems' --the 'N' standing for 'non-deterministic Turing machine' that you would need to be able to perform quickly if you wanted to break codes in less time than it would take monkeys to type Hamlet," sketches out the RSA public-key code scheme (see the Wikipedia entry for more details), and speculates why U.S. diplomatic correspondence did not use this readily available protection.