Discovery of an organic trefoil knot 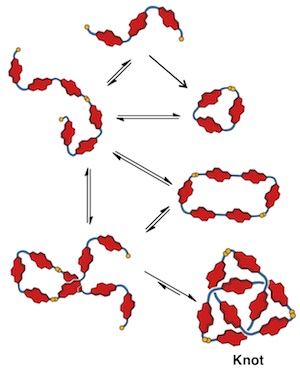 "Proposed mechanism for the synthesis of the trefoil knot." The building blocks (top) can join and separate to make and unmake loops and longer loops and chains. The arrows show the energetically possible directions of change. Note that the trefoil is shown as energetically favored.

This is the title of a report in Science for November 9, 2012. The authors are Nandhini Ponnuswamy, Fabien Cougnon, Jessica Clough, G. Dan Pantoş and Jeremy Sanders, chemists from the Universities of Cambridge and Bath. As they state, "The synthesis of molecular knots is particularly difficult because it requires precisely defined pathways and transition states that are entropically much more demanding than topologically simpler macrocyclization or catenation processes." Here "macrocyclization" is the formation of long, closed loops and "catenation" is the formation of links. Up to now, most knot syntheses have been carried out by using a scaffolding with metal ions to hold strands in place during the knotting. This paper describes a new method: the assembly blocks have hydrophobic elements, and the knot configuration, which packs those elements into the center, can become energetically advantageous, especially when the ambient solution has a high concentration of salts. An interesting point is that the handedness ("chirality") of the knot is determined by the optical isomer class of the building block, which in this case is composed of L-amino acids. The authors report that substituting the corresponding D-amino acids leads to the left-handed trefoil, and that a mixture of the L and D ingredients "self sorts" to give a mixture of the two knots, "which further demonstrates that this structure is exceptionally efficient in its packing and, therefore, thermodynamically stable." 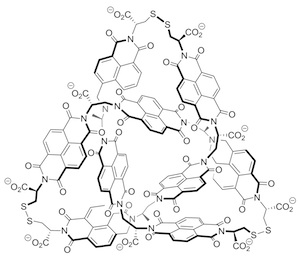 "Chemical structure of the right-handed knot." In this more detailed look at the complete molecule, the nine circled minus signs represent negative charges. It is believed that repulsion between the negative charges is one of the important factors that lead to the efficient assembly of the trefoil knot as a single optical isomer. Larger image. Images courtesy of Dan Pantoş.

MoMath in the press

The national Museum of Mathematics opened its doors at 11 East 26th Street in New York City on 12/12/12. The opening was reported extensively in the media. For example:

The Atlantic takes on the Common Core Standards

"A New Kind of Problem: The Common Core Math Standards," by Barry Garelick, was posted November 20, 2012 on the Atlantic's website. The subheading: "A set of guidelines adopted by 45 states this year may turn children into 'little mathematicians' who don't know how to do actual math." Garelick anchors his presentation on some responses from parents and teachers to an earlier posting of his: "It's Not Just Writing: Math Needs a Revolution, Too," which criticized some math reform programs, essentially for the same failing. "Some of us had hoped the situation would improve this school year ... [with] ... the new Common Core Standards." (He links to the Common Core State Standards Initiative website). "Let's look first at the 97 pages of what are called 'Content Standards.' Many of these standards require that students to be able to explain why a particular procedure works. It's not enough for a student to be able to divide one fraction by another. He or she must also 'use the relationship between multiplication and division to explain that (2/3) ÷ (3/4) = 8/9, because 3/4 of 8/9 is 2/3.'" Garelick continues: "It's an odd pedagogical agenda, based on a belief that conceptual understanding must come before practical skills can be mastered." He documents the cost of this approach: "Under the Common Core Standards, students will not learn traditional methods of adding and subtracting double and triple digit numbers until fourth grade. (Currently, most schools teach these skills two years earlier.) The standard method for two and three digit multiplication is delayed until fifth grade; the standard method for long division until sixth." What is wrong with this picture? Garelick makes it clear at the end: "The guidelines [e.g. 'Make sense of problem solving and persevere in solving them. Reason abstractly and quantitatively.'] seem reasonable enough. But on closer inspection, these things are essentially habits of mind that ought to develop naturally as a student learns to do actual math. ... True habits of mind develop with time and maturity. ... The Common Core standards seem to presume that even very young students can, and should, learn to make sophisticated leaps in reasoning, like little children dressing in their parents' clothes." And he ends on an ominous note: "Unfortunately, the emails and newspaper articles I've been seeing may herald a new era where more and more students are given a flimsy make-believe version of mathematics, without the ability to solve actual math problems."

Have you ever wondered what it feels like to be a young mathematician whose current line of research, if it pays out, just might lead to a Fields Medal? If you live in France, you can find out; in fact it's hard not to know. Cédric Villani, who won the award in 2010, is everywhere on the airwaves and in the print media with his well-told story, his eccentric/elegant costume and his intelligent, articulate opinions on mathematics, art, education and society. Besides his blog at Le Monde, and his TED talk (in English!), here is a sampling:

Cédric Villani, born in 1973, won the Fields Medal for his work on the mathematics of Landau damping, a phenomenon in plasma physics. He is director of the Institut Henri Poincaré in Paris and professor at the University of Lyon I.