Greene: "Montgomery Blair is a huge suburban high school with a diverse population. Students come from various neighborhoods, some rougher than others, and many students struggle when they first start." He asks Scott to talk about the importance of making a connection with his students. Scott: "Yeah. I think that's huge. We can preach to kids until they turn blue and we turn blue. But if there's no connection, then there's no response. I mean, I constantly search for ways to connect with students with the language, with conversations, music." Standing in the hallway, Greene asks Scott to improvise:

3-manifolds in the Scientific American

On December 26, 2012 Scientific American posted "Getting into Shapes: From Hyperbolic Geometry to Cube Complexes," by Erica Klarreich; the piece was originally written for Simons Science News, a division of the Simons Foundation. Klarreich describes recent work in 3-manifolds that has led to a complete proof of the classification theorem conjectured by William Thurston in 1982. 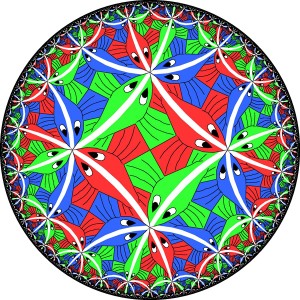 Klarreich uses this tesselation of the hyperbolic plane by 60°-angled squares on the way to explaining how every orientable surface has a unique "standard" geometric model, a 2-dimensional analogue of Thurston's geometrization conjecture. Image by Doug Dunham, University of Minnesota Duluth, used with permission.

"Thurston's key insight was that it is in the union of geometry and topology that three-dimensional shapes, or 'three-manifolds,' can be understood. Just as the topological category of 'two-manifolds' containing the surfaces of a frying pan and a pencil also contains a perfect sphere, Thurston conjectured that many categories of three-manifolds contain one exemplar, a three-manifold whose geometry is so perfect, so uniform, so beautiful that, as Walter Neumann of Columbia University is fond of saying, it 'rings like a bell.' What's more, Thurston conjectured, shapes that don't have such an exemplar can be carved up into chunks that do." Her survey spans the history of the subject, from foundational work by Wolfgang Haken (1962) and Friedhelm Waldhausen (1968) through Thurston's great geometric conjecture and its partial solution by Gregory Perelman (2003), through recent discoveries of Vladimir Markovic and Jeremy Kahn (2011) and the final bringing together of all these threads, along with Daniel Wise's cube complexes, by Ivan Agol in March, 2012. Klarreich's report is a model of elegant, accurate explanation. Highly recommended!

is the title of a Letter in the January 10 2013 Nature. The authors, a team led by Ivan Smalyukh (Boulder) and including mathematician Rob Kusner (U Mass Amherst), examine the behavior of nematic liquid crystals when topologically interesting particles are put in the mix. "Nematic" means that the molecules in the liquid crystal self-align with their long axes roughly parallel. Mathematically the molecules form a line field, which can be oriented in the cases studied here to give a vector field. Now the particles (typically a few microns in size) have been coated so as to force the abutting molecules to have their long axes perpendicular to the particle surface. This induces a twist in the vector field, called the topological charge of the particle, and equal to $\pm \frac{1}{2}\chi(S)$, plus or minus half the Euler characteristic of the surface $S$ bounding the particle; "plus" when the vector field points out along $S$. For the vector field to remain continuous and unchanged far from the particle, this twist must be cancelled by nearby singularities. These can be points where the vector field has topological charge $\pm 1$, or "disclination loops" which carry the topological charge of a point. The article reports experiments with particles of genus 1 (torus), 2 (double torus), up to genus 5, and optical detection of the singularities dictated by topology.

Diagrams of topologically charged particles and the compensating point vector field singularities, in the case where the plane of the particle lies parallel to the nematic field. The diagrams show the field in the yellow $(x,y)$-plane and in the blue $(x,z)$-plane. For genus 1 (topological charge $m_c=0$) the nematic vector field has two point singularities of opposite charge. (If the field points out from the surface, the red singularity has charge $-1$ and the magenta charge $+1$.) For genus 2 ($m_c=-1$) the field has two $+1$ point defects and one with charge $-1$. Images from Nature 493, 200-205, used with permission. 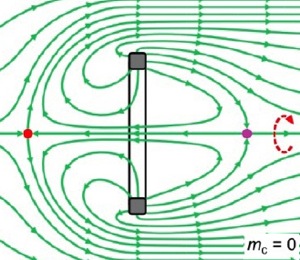 In the Supplementary Materials the authors show this ideal diagram of a genus-one surface perpendicular to the field (shown as a vector field), with two compensating point defects and a circularly symmetric total configuration; color conventions as above. The particle lies in the $(y,z)$-plane; the image can help explain how topological charge is calculated. It's the degree of the map from a small 2-sphere about the singular point to a 2-sphere in the space of tangent vectors. If there's no singularity the vector field is essentially constant and that degree is zero. If the vector field points out along all 3 sets of axes, the degree is one. For the red point, the vector field points out along the $y$ and $z$ axes, and in along the $x$. This is like the "all-out" map composed with a reflection in the $(y,z)$ plane, and so has degree $-1$. The map for the magenta point (out along $x$-axis, in along $y$ and $z$ axes) involves composing the "all-out" map with consecutive reflections in the $(x,y)$ and $(x,z)$ planes; two reflections bring the degree back to $+1$. In the authors' current experiments with the perpendicular set-up the compensation always involves disclination curves: configurations like this one are "hindered by the high free energy of elastic distortions" and are not observed.

The same issue of Nature ran a Feature article by Ewen Callaway entitled: "Dyscalculia: Number games." Dyscalculia ("severe difficulties in dealing with numbers despite otherwise normal ... intelligence") is common: it may afflict as much as 7% of the population. Callaway shows us some typical manifestations. For example, trouble in counting a randomly organized group of (say) nine dots. "Children with dyscalculia take longer than other children to count dot patterns. Most instantly recognize patterns of up to four dots, whereas dyscalculics tend to count the dots one by one." In another example, dyscalculics have no problem reporting that a large "3" is taller than a small "8," but they "take longer and are less accurate" at judging if a "7" is greater than a "9" of the same size. Callaway focuses on the research of Brian Butterworth, "a cognitive neuroscientist at University College London who studies numerical cognition." Butterworth believes that dyscalculia "is at heart a deficiency of basic number sense and not of memory, attention or language" and that "numerical abilities [rely] on specialized brain networks, and not only on those supporting general intelligence." Butterworth argues that there is a cognitive capacity which is fundamental to number sense. "He calls this 'numerosity coding': the understanding that things have a precise quantity associated with them, and that adding or taking things away alters that quantity." Along with his research "he has crusaded to get dyscalculia recognized--by parents, teachers, politicians and anyone who will listen. And he is using his scientific insights into the condition to help dyscalculic children. 'What's the point of telling someone they have dyscalculia if you can't help them?' he says." Butterworth's work, "The Mathematical Brain," is available on his website.