"Ancient times table hidden in Chinese bamboo strips," by Jane Qiu, was posted on the Nature News website on January 7 2014. "Five years ago," the story goes, "Tsinghua University in Beijing received a donation of nearly 2500 bamboo strips." Twenty one of them turned out to be the columns of a multiplication table: the strips are uniformly partitioned into 20 cells "The top row and the rightmost column contain, arranged from right to left and from top to bottom respectively [actually, from left to right and from bottom to top -TP] the same 19 numbers": $\frac{1}{2}, 1, 2, \dots, 9, 10, 20, \dots 90$. 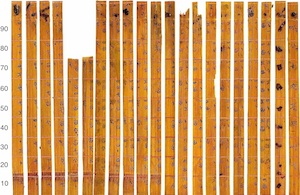 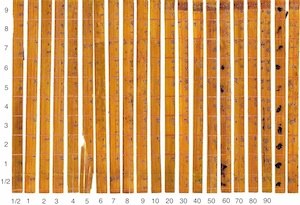 A Chinese multiplication table from 305 BC. Larger image. The strips, about half an inch wide and 18 inches long, were carbon-dated to about 305 BC. Image courtesy of the Research and Conservation Centre for Excavated Text, Tsinghua University. (The Arabic numbers labeling rows and columns were added here).

Qiu quotes Feng Lisheng of Tsinghua: "Such an elaborate multiplication matrix is absolutely unique in Chinese history," and Joseph Dauben of CUNY: "The discovery is of extraordinary interest. It's the earliest artefact of a decimal multiplication table in the world."

[It is important to distinguish what this table is (the earliest cartesian-style matrix-format multiplication table known, and by a long shot; the Old Babylonians had nothing like it; and because the same ideographic characters are still used in the same way, any schoolchild could multiply with it today) from what it is not, which would be evidence of decimal notation (i.e. digits representing $0, 1, \dots, 9$, and place-value). The numbers are represented by their names, which Chinese, like many languages, organizes in terms of powers of ten. So the table shows that $9\times 60 = 540$ by the four characters five one-hundred four ten at the intersection of the nine column and the six ten row. Among indications that the names are not a form of decimal notation is the appearance in the table of two forms for 20, which can be called two ten (二 十) or twenty (廿); likewise 30 appears both as three ten (三 十) and as thirty (丗). -TP]

Turing in the Times 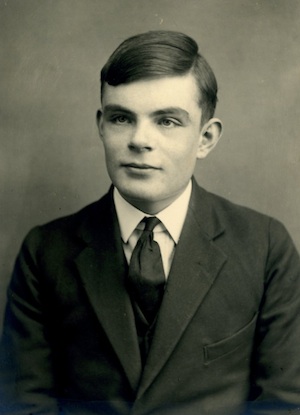 Alan Turing in 1928 (at age 16). Photograph courtesy of Sherborne School. Sherborne also sent along two other remarkable photographs, showing Turing in 1926 and in 1930.

This picture was printed in the New York Times on December 24, 2013. The context: "Alan Turing, Enigma Code-Breaker and Computer Pioneer, Wins Royal Pardon." As reported by Emma G. Fitzsimmons, the pardon had come the day before, "from Queen Elizabeth II ... for his conviction in 1952 on charges of homosexuality, at the time a criminal offense in Britain." Last year a pardon had been denied, but after a public campaign raised over 35,000 signatures urging reconsideration, and gained "worldwide support from scientists, including Stephen Hawking," the tide turned. Fitzsimmons quotes Chris Grayling, the British Justice Secretary, who had made the request to the Queen: "[Turing] deserves to be remembered and recognized for his fantastic contribution to the war effort and his legacy to science." And the Prime Minister, David Cameron: "His action saved countless lives. He also left a remarkable national legacy through his substantial scientific achievements, often being referred to as the 'father of modern computing.'"

Phil Plait's "Bad Astronomy" blog is hosted on Slate. On January 17, 2014 he posted "When Infinity is Actually a Small, Negative Fraction", linking to a Numberphile YouTube item, "ASTOUNDING: $1+2+3+4+5+\dots = -\frac{1}{12}$", which as of this writing has racked up 1,410,491 views. Plait re-explains some of the steps in the video and then waxes philosophical: "It's funny. We live our lives, we Earthbound apes, and we think we have it all figured out. ... And then you find out that, in a sense, infinity lives a second life as a small negative fraction. It feels more than just weird. It feels pernicious."

Naturally there were quite a few objections to this argument; Plait posted a follow up the next day. He notes that there is a "rigorous mathematical method" [more than one, but they involve analytic continuation in the complex plane or similarly non-elementary procedures] that can be applied to $1+2+3+\dots$ and assigns it a value of $-\frac{1}{12}$. But he admits that "the method used in the video ... uses a trick that's against the rules, so strictly speaking it doesn't work." He links to Terence Tao and John Baez (see also Baez for links with string theory) as references on analytic continuation.

[There is a problem of context here; but what is truly pernicious is to write $1-1+1-1+\dots = \frac{1}{2}$ for a general audience (as is done in the movie and in the blog) without explaining what the context is, and how the "averaging" argument used makes it a different kind of statement from $1-1+1=1$. The "strictly speaking" does not help. -TP]

"Mangarevan invention of binary steps for easier calculation" by Andrea Bender and Sieghard Beller (Bergen) was published in PNAS on December 16, 2013. The item was picked up by Business Insider ("An Ancient Polynesian Culture Used A Completely Unique Binary Counting System"), Nature ("Polynesian people used binary numbers 600 years ago. Base-2 system helped to simplify calculations centuries before Europeans rediscovered it.") and Science ("Polynesians May Have Invented Binary Math"). As Bender and Beller describe their findings: "One of two number systems traditionally used on Mangareva, a small island in French Polynesia, had three binary steps superposed onto a decimal structure." (The other system "was used for general counting and contained monolexemic [single word] numerals for the numbers 1 through 9 and for the powers of 10 up to at least 10,000,000.") The system they focus on was used for "counting a small group of highly valued objects, namely turtles, fish, coconuts, octopuses, and breadfruit." This system used the general words for the numbers 1 to 9, but "distinct monolexemic numerals for 10, 20, 40, and 80 [see Table]. The numeral for 80 (varu) was counted with the basic numerals from 1 through 9 to generate multiples up to 720."

Table of Mangarevan numerals, adapted from Beller and Bender.

Arithmetic. The authors give two addition tables, one for the numerals 1 to 9 encoding the 55 "addition facts" from $1+1=2$ to $9+9=\mbox{K}8$. The other table is for powers; the authors remark that here the binary nature of the system means that these additional facts require little memorization: "Adding a power term to itself yields the next power term in the sequence (e.g., K + K = P), whereas adding different power terms to each other yields a concatenation of these terms (e.g., P + K = PK)." (They remind us that Leibniz, the Western inventor of binary arithmetic, had remarked that binary notation would eliminate the need for learning addition and multiplication tables by heart.) The mixed system devised by the Mangrevans allows some of this arithmetic simplicity without incurring the very long number-names of pure binary notation. As the authors remark, it is especially well suited to a culture with no written language or number notation, but where exact calculations in a certain range were of great importance. They conclude: "For this unique invention and the lessons it may teach us, Mangarevan deserves a prominent position in theorizing on numerical cognition."