Each year Science and the NSF cosponsor the Interntional Science & Engineering Visualization Challenge, "to promote cutting-edge efforts to visualize scientific data, principles and ideas" (as explained by Colin Norman, Science's News Editor, in the issue dated February 3, 2012). As that issue reports, Honorable Mention in the "Illustration" category was won this year by Konstantin Poelke and Konrad Polthier (Freie Univestität Berlin) for this image: 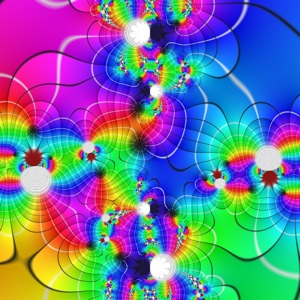 Exploring Complex Functions Using Domain Coloring, by Poelke and Polthier. This image shows their application of the "domain coloring" technique to the function $g(z)=f(f(z))$, where $f(z) = \frac{iz}{ \exp(z/\sin(iz) ) } - 1$; the real and imaginary parts of $z$ run from $-8$ to 8. Larger image. Images courtesy of Konstantin Poelke.

As Science explains, "they assigned each complex number in their equation to a spot on a color wheel. The further numbers get from zero, the brighter they are (white regions, for instance, represent mathematical 'singularities' that approach infinity)." More precisely, to graph $w =f(z)$ they color each $z$ according to the corresponding $w$: setting $w = re^{i\theta}$ the hue corresponds to $\theta$, (going from red through yellow, green, blue, purple and back to red as $\theta$ runs from $0$ to $2\pi$) and the intensity to $r$ (so $r=0$ comes out black and the color goes to white as $r\rightarrow\infty$). The prize-winning image involves the iteration of a function with essential singularities; for something simpler, here is how they graph a rational function: 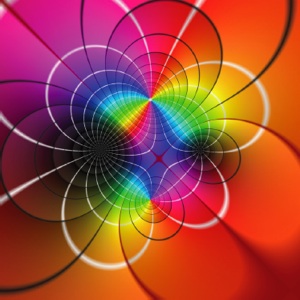 (The topic came up in this column once before, in March 2007). "Ancient Islamic architects created perfect quasicrystals" is a posting by James Dacey in physicsworld.com, dated January 31, 2012. Dacey is reporting on work by Rima Ajlouni (actually, Rima A. Al Ajlouni) of the College of Architecture at Texas Tech; her paper, "The global long-range order of quasi-periodic patterns in Islamic architecture," appears in Acta Crystallographica A for March, 2012. Al Ajlouni proposes a ruler-and-compass algorithm that could account for the known corpus of medieval islamic quasi-periodic tilings. The constructions all start with a decagon (known to be constructible at least since Euclid). From the decagon one can construct a set of concentric, larger and larger decagons with the property that each one is the center of the $(10,3)$ star formed by joining the vertices of the next larger one, each to the one 3 beyond; the stars form a net, as shown in this figure: 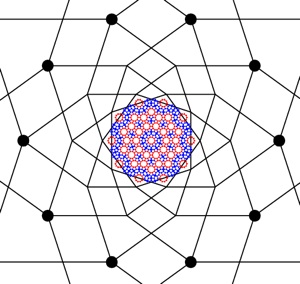 The start of the second stage of the generation of the quasi-periodic tiling pattern found in the courtyard of the Madrasa of al-'Attarin (1323; Fez, Morocco). The center of this image has been completed during the first stage by propagating a simple decagonal star (shown in red) to the vertices of a net identical except for scale to the one drawn in black; Ajlouni shows how to fill in the interstitial spaces algorithmically. Larger image.

The construction proceeds in stages, each one using as motif the product of the stage before (a procedure dual in some sense to the subdivision/expansion generation of Penrose tilings). Stage 0, so to speak, is a single decagonal $(10,3)$ star. Stage 1 puts this star at each of the vertices of the decagonal net of depth 5, and fills in the interstitial spaces, algorithmically, with other polygons. Stage 2 repeats the process, using the stage-1 tiling as a motif. 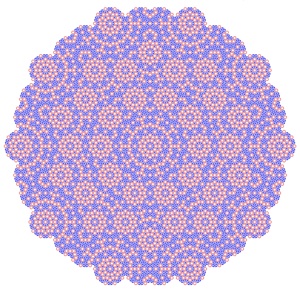 Stage 2 in the reconstruction of the al-'Attarin tiling. The motif from stage 1 is propagated to all the vertices of a depth-5 decagonal net. Larger image.

Ajlouni's Acta Crystallographica paper also includes remarks on the relationship between these tilings, with their 10-fold rotational symmetry, and general Penrose tilings.

"The Power of Numbers"

This was Gina Kolata's title for an interview with "the mathematician and geneticist" Eric Lander, in the January 2, 2012 New York Times. "As founding director of the Broad Institute of Harvard and M.I.T., he heads a biology empire and raises money from billionaires. He also teaches freshman biology (a course he never took) at M.I.T., advises President Obama on science and runs a lab." We learn that Lander attended Stuyvesant High School in New York. "He joined the math team and loved it--the esprit de corps, the competition with other schools, the social aspect of being on the team." He made the U.S. team for the 1974 Mathematics Olympiad. Went to Princeton and majored in math. "He graduated as valedictorian at age 20, won a Rhodes scholarship, went to Oxford and earned a mathematics Ph.D. there in record time--two years." (The article's subheading tells us that he worked "in a subfield so esoteric and specialized that even if someone gets a great result, it can be appreciated by only a few dozen people in the entire world.") But mathematics lacked something. Kolata quotes Lander: "I began to appreciate that the career of mathematics is rather monastic. Even though mathematics was beautiful and I loved it, I wasn't a very good monk." He moved first into managerial economics, but then, at around 23, he started "hanging around a fruit-fly genetics lab at Harvard." The biologist David Botstein, then at MIT, needed "someone who knew mathematics to take on a project involving traits ... that were associated with multiple genes" and recruited Lander. Lander solved the problem and found his niche: his career as a mathematical geneticist had begun.

Nature for February 23, 2012 has a special section with a collection of essays and comments celebrating 100th anniversary of Alan Turing's birth (June 23, 1912). An editorial sets the tone: "The scope of Turing's achievements is extraordinary. Mathematicians will honour the man who cracked David Hilbert's Entscheidungsproblem or 'decision problem', and cryptographers and historians will remember him as the man who broke Nazi Germany's Enigma code and helped to shorten the Second World War. Engineers will hail the founder of the digital age and artificial intelligence. Biologists will pay homage to the theoretician of morphogenesis, and physicists will raise a glass to the pioneer of nonlinear dynamics. Philosophers, meanwhile, are likely to continue to frown over his one-liners on the limits of reason and intuition: 'If a machine is expected to be infallible, it cannot also be intelligent,' he said in a 1947 talk to the London Mathematical Society."

The same editorial continues: "His multidisciplinary approach alone makes him of interest to this journal, yet questions still arise on whether the best papers in pure mathematics, computer science and artificial intelligence should be published in Nature. We certainly think so."