Chicks and the number line

"Chickens Agree: Left Means Less; Right Means More" was the heading on a New York Times report by Erica Goode (Science section, January 30, 2015). As Goode reports: " ... a team of Italian researchers has found that newborn chicks, like humans, appear to map numbers spatially, associating smaller amounts with the left side and larger amounts with the right side." The researchers are Rosa Rugani, Giorgio Vallortigara, Konstantinos Priftis and Lucia Regolin from the universities of Padova and Trento; their work, "Number-space mapping in the newborn chick resembles humans' mental number line," appeared in the issue of Science dated that day. As the authors explain in their Abstract, "Humans represent numbers along a mental number line (MNL), where smaller values are located on the left and larger on the right. ... In our experiments, 3-day-old domestic chicks, once familiarized with a target number (5), spontaneously associated a smaller number (2) with the left space and a larger number (8) with the right space. The same number (8), though, was associated with the left space when the target number was 20. Similarly to humans, chicks associate smaller numbers with the left space and larger numbers with the right space." The experimental set-up, as described in their article: 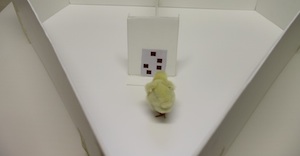 In their conclusion the authors remark: "... number-space mapping is implemented in humans through a topographical representation in the right posterior parietal cortex. ... we suggest that a similar predisposition to map numbers onto space is embodied in the architecture of [other] animal neural systems."

In January, 2015 the National Bureau of Economic Research released a working paper entitled "On the origins of gender human capital gaps: short and long term consequences of teachers' stereotypical biases." The authors are Victor Lavy (Economics, Warwick) and Edith Sand (Economics, Tel-Aviv). The article was picked up by the New York Times: "How Teacher Biases Can Sway Girls From Math and Science" by Claire Cain Miller, February 7, and later in Slate: "Teachers Give Girls Better Grades on Math Tests When They Don't Know They Are Girls" by Amanda Marcotte on February 10.

Levy and Sand studied three cohorts of 6th grade students in Tel-Aviv, 2002-2004: 3011 students in all, in 112 classes, and then tracked them all the way through high school. They measured 6th grade teachers' gender-biased behavior by comparing their average marking of boys and girls in a "non-blind" classroom exam to the respective means in a "blind" national exam marked anonymously. "We show that there is large variation within schools in this measure, and that it has a significant effect on the academic achievements of both genders during middle school and high school in math, science and language and also on the choice of the level of math and science study programs in high school. These high stake choices determine practically whether a student will be able to meet requirements of admission to science and math studies at universities later in life."

For the Times, Miller got a quote from Lavy: "The most surprising and I think important finding in the paper is that a biasing teacher affects the work choices students make and whether to study math and science years later." In Slate, Marcotte reminds us of the so-called Pygmalion effect: " ... it's shown up in study after study: Just by believing that a student has an aptitude for something, the teacher makes it more likely to be true. And so it matters quite a bit that teachers have an unconscious belief that boys are better at math than girls, and we may be seeing the results in the many girls who might otherwise enjoy math getting discouraged and dropping out."

brought to you by Google. MIT's Technology Review has a rubric: "Emerging Technology from the arXiv" [arXiv is the site for posting one's latest research in preprint form]. On January 1, 2015 they ran "Best of 2014: How Google "Translates" Pictures into Words Using Vector Space Mathematics." The arXiv piece in question is "Show and Tell: A Neural Image Caption Generator," by Oriol Vinyals and three other Google engineers. Technology Review explains the new developments mainly in terms of an earlier arXiv item, "Exploiting Similarities among Languages for Machine Translation," by Tomas Mikolov, Quoc V. Le and Ilya Sutskever, all also at Google, which they had picked up in September 2013: "How Google Converted Language Translation Into a Problem of Vector Space Mathematics.". Here TR can give an idea of the process.

TR continues: "Now [Google] is using the same machine learning technique to translate pictures into words. The result is a system that automatically generates picture captions that accurately describe the content of images."