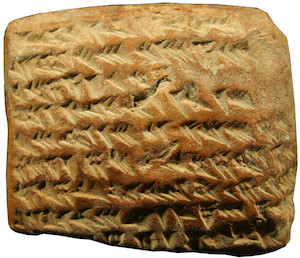 This tablet had been classified as a mathematical problem text until Ossendrijver noticed that it matched partial calculations on several other inscrutable tablets, two of which mention Jupiter explicitly (all of these tablets had been sitting in the British Museum since around 1880). By collating them he was able to arrive at an almost complete understanding of all of the calculations.

Another calculation (reconstructed by Ossendrijver from fragments on the other tablets) further substantiates the Babylonians' conflation of displacement and area calculations: to reckon the date at which Jupiter would have gone half-way between its positions at day 1 and at day 60, they used the geometric formula (known to them since Old Babylonian times) giving the length and position of a horizontal slice cutting a trapezoid into two of equal area [the length is $\sqrt{\frac{1}{2}(\mbox{base}^2 + \mbox{top}^2)}$].

Truchet train-tracks at the Museum of Mathematics

Kenneth Chang's story ran in the New York Times on February 1, 2016: "At Museum of Mathematics, Meet 2 Beavers That'll Never Meet." It's about a new exhibit at the Museum, but mainly about how it was thought up and how hard it was to make it work. What visitors see is a model train layout with very loopy track running through what looks like swampy, woodsy territory. Two beavers, separately, wind their way along the track. Now this is a special track: there are 24 turntables which visitors can activate to change the configuration of the layout. It can be one large loop (in several ways), 18 small loops and almost anything in between. But as Chang's title suggests, no matter how the track is changed, the beavers can never collide.

"The exhibit grew out of brainstorming about Truchet tiles, named after Sébastien Truchet, a French Dominican priest who described them in 1704." More about Truchet tiles. "The Beaver Run exhibit is based on Truchet tiles popularized in 1987 by Cyril Stanley Smith, a scientist at Massachusetts Institute of Technology. On each tile, two quarter-circles connect midpoints of adjacent sides."

Truchet tiles with quarter-circle markings, and part of a typical tiling.

"Timothy Nissen, the museum's chief designer, thought of turning the quarter-circles into train tracks." And of rearranging them remotely by making interior tiles into turntables which, when rotated 90$^{\circ}$, change one layout to another.

One configuration of a layout with $2\times 3$ turntables.

Glen Whitney, the Museum founder and president, "also a model train enthusiast, liked the idea, and he remembered the mathematical proof that would allow two trains to run on the tracks and never crash." (The rules specify that a turntable cannot be rotated if there's a train on it.)

The proof runs like this. First, the layout can be arranged so that all the track forms a single loop (any two adjacent loops can be joined by rotating a shared turntable). Use that loop to put a "forward" direction on the whole track. Now observe that if any single turntable is rotated, the new layout is compatible with the global forward direction.

Chang shares with us the secret of how Nissen and Whitney's locomotives and cars got morphed into beavers destined never to meet. He quotes Cindy Lawrence, co-Director of the Museum: "I had a very strong sense that trains might appeal more to boys than girls.We thought little beavers, little animals, are more universally appealing."

This was the title of an "Ed Talk" interview that ran in the Education Life section of the New York Times on February 7, 2016. Jane Karr interviewed Andrew Hacker, who after teaching political science (Queens College, CUNY) for nearly 45 years has branched out into quantitative reasoning for the last three. "His experimental course requires no geometry, algebra or calculus; instead, he teaches facility with numbers. He calls it adult arithmetic, and it involves statistics, analytic thinking and rigorous computation. Further challenging convention, his new book, The Math Myth and Other STEM Delusions, published next month, argues against the requirement that all high school students take a full menu of math." Some excerpts from Hacker's answers:

An answer to Prof. Hacker came in a letter to the Times published on February 19, from Lucy Brownstein in Brooklyn.

"Andrew Hacker ... says that since only 5 percent of people use algebra and/or geometry in their jobs, students don't need to learn these subjects.

As a high school student, I strongly disagree.

And while your job may never require you to know the difference between a postulate and a theorem, it will almost certainly require other math-based skills, like how to prove something, or how to understand a graph. . .

Algebra and geometry have a place in the classroom. If students are failing, then the way math is taught may need to change. But what is taught needs no alteration."

A similar interview appears in the Chronicle of Higher Education, February 26: "The Case Against Mandating Math for Students," interviewer Dan Berrett. The occasion is the upcoming publication of The Math Myth ... . Berrett summarizes the argument: "Typical math requirements, like mastering polynomial functions or parametric equations, unnecessarily trip up students who plan to major in dance or fashion design ... and are seldom used even in many scientific disciplines. Arithmetic, on the other hand, is the quantitative literacy that people actually need. But it's often poorly focused and poorly taught."