Science ran a report on March 11, 2011 from a 15-person team led by Xianbing Zeng (Sheffield), Carston Tschierske (Halle) and Goran Ungar (Sheffield and Seoul). The subject is the structure of liquid crystals formed of tetraphilic molecules, those which bear four types of mutually incompatible sub-groups. 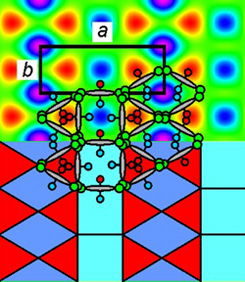 A reconstruction from grazing-incidence small-angle x-ray scattering (GISAXS) data of the tetraphilic molecule tiling at 150°, with the schematic (as above) molecules overlaid on the image, and the corresponding tiling by polygons shown at the bottom. The dimensions of the rectangular repeat are a = 11.2 nm, b = 4.5 nm. Here there are three possible tiles: a (3, 0) triangle containing three "red" groups, a (0, 4) rhombus with four "blues," and a (1, 3) square with three blues and a red. 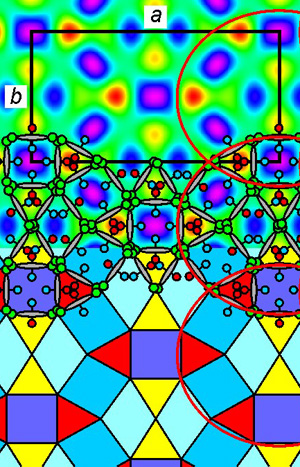 The authors conclude: "The complexity of [these] self-assembled superstructures is unprecedented," and they speculate that "polyphilic LCs [liquid crystals] may ultimately produce quasi-periodic honeycombs."

How to grow a mind

Also in the March 11 2011 Science was a review article by Joshua Tenenbaum (MIT), Charles Kemp (Carnegie-Mellon), Thomas Griffiths (Berkeley) and Noah Goodman (Stanford), a computer scientist and three psychologists, surveying recent work on the age-old question: "How do our minds get so much from so little? ... A massive mismatch looms between the information coming through our senses and the outputs of cognition." They give as just one example "the situation of a child learning the meanings of words," and characterize the problem as "generalization from sparse data," one with obvious applications to artificial intelligence, but also fundamental to our understanding the way our own minds function. The authors begin by outlining how Bayes's rule explains the way "abstract knowledge gain[s] inference from incomplete data." "Background knowledge is encoded through a constrained space of hypotheses H, ... candidate world structures that would explain the observed data." The probability P(h|d) of validity of hypothesis h in the presence of observed data d is proportional to the product P(d|h)P(h): the extent to which h predicts d (the likelihood) and "the learner's degree of belief in ... h prior to the observations" (the prior). They give an illustration of "Bayes's rule in action:"

The new research recapitulated in this review addresses the question: Where does H come from? or, more specifically, what "forms of knowledge representation ... undelie the probabilistic generative models needed for Bayesian cognition." The answer, in brief, is that these forms are themselves generated by a higher-level Bayesian mechanism, which itself has a similar origin. This is the Hierarchical Bayesian Model explanation for how cognition can be bootstrapped up from chaos. The authors realize that even this more sophisticated analysis only pushes back by a couple of levels the question: How does it all start? and they end their survey by sketching several currently popular avenues of research in this direction.

A schematic representation of two levels in a Bayesian Hierarchical Model; here the object is an understanding of part of the animal kingdom. The observed data D are represented by a checklist matrix: which animals have what features. "A search algorithm attempts to find both the form F [in this case, a tree] and the structure S of that form that jointly maximize the posterior probability P(S,F|D), a function of the product of P(S|F) and P(D|S)." Image courtesy of Joshua Tenenbaum.

A report in the PNAS for February 22, 2011 (abstract) casts more light on the relation between language and the cognition of number. The authors (Elizabet Spaepen, Marie Coppola, Elizabeth S. Spelke, Susan E. Carey and Susan Goldin-Meadow, a Harvard-Chicago team) take pains to differentiate their work from research done on the Amazonian tribe Pirahã, whose language lacks number-words. Studies (see for example Frank, Everett, Fedorenko and Gibson) have shown the tribespeople unable to accurately internalize number concepts for quantities larger than three. To disentangle linguistic from cultural effects, the authors worked with profoundly deaf residents of Nicaragua, who live and work in a numerical culture but who are "homesigners:" they can communicate only by means of a home-grown set of signs. For example, they represent numbers by sticking out so many fingers. "As the number of objects grew, so did the average number of fingers the homesigners extended, but the number of fingers was only sometimes exactly correct." More specifically, "Homesigners ... understand that each set has an exact numerical value, and that the gesture representing it must represent a smaller set if items are removed, and a larger set if items are added. However, they do not have an errorless way of arriving at a gestural representation for that new value, at least when dealing with large sets." This is not just a problem in communication: "...they cannot reliably make the number of items in a second set match the number in a target set if the sets contain more than three items." They conclude that, in the absence of mastery of a language with number-words and a counting sequence, "cultural context ... and social context ... are not enough to scaffold the creation of a count routine or representations of exact number that are flexible and generalize across domains." This research was picked up by NPR's Morning Edition on February 9.

The sound of π on NPR

For π day (March 14), NPR treated us to a musical rendition of our most famous transcendental. It's due to a musician named John Blake, who "decided the song would be in C, then assigned each note a number: C=1, D=2 and so on up through 9. Using those assignments, he played the sequence of pi: 3.14159 through 31 decimal places." [Interestingly enough, the digit 0 does not appear until the 32nd place]. Blake also experiments with polyphony and with working π into the rhythmic structure. A "clarification" posted on the NPR website on March 22 explains that Blake was not the first to come up with this idea. In fact there's a YouTube posting by czechsteve on April 24, 2008, and Lars Erickson has composed a Pi Symphony with a main theme similar enough to Blake's to cause a copyright problem: Blake's YouTube upload was taken down. On a lighter note, Vi Hart posted "Pi is wrong" where she makes and bakes in her inimitable and irresistible style the (by now hopeless) case for making 2π the fundamental constant.

John Milnor and the media

NPR's All Things Considered ran the news on March 24, with Robert Siegel's interview of Julie Rehmeyer (Science News, Wired); a pretty disgraceful performance all around. NPR spliced in a laugh track after Rehmeyer began her explanation of higher-dimensional spaces with "Imagine for a moment that you're a flat bug on a sheet of paper..." and after the following exchange, as per the transcript:

The other Milnor achievement mentioned by Rehmeyer is the "Hairy Ball Theorem."

It is unfortunate that this rubbish was broadcast to a national audience under the auspices of NPR. [Disclosure: Milnor was my thesis advisor. Rehmeyer asked to interview me; I referred her to colleagues I thought better positioned to evaluate Milnor's stature and contributions. A mistake, in retrospect. -TP]