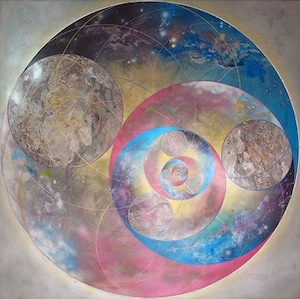 "The Fibonacci sequence becomes a painting: art is mathematics" was a slide show featured on March 3, 2014 in La Repubblica. The thirteen paintings are presented by Virginia Della Sala: "Behind every one of Yasuo Nomura's landscapes ... hides a mathematical sequence, a physical theory, a scientific graph. The Fibonacci sequence, golden ratios, prime numbers, the Ptolemaic and Copernican systems." Della Sala quotes Nomura: "These are all elements of my pictorial practice. I take my cue from theoretical physics and modern mathematics, and apply them to the representation of what's real. Not only that: in my art I also theorize the tight relation that these numbers and these structural theories have with spaces and realities of dimensions higher than those we perceive."

A new example of a quasicrystal, with local 5-fold symmetry, was published in Nature on March 6, 2014. "Self-assembly of hydrogen-bonded two-dimensional quasicrystals" uses scanning tunnelling microscopy to study "self-assembled monolayers of ferrocenecarboxylic acid (FcCOOH)" and finds that "FcCOOH forms highly unusual cyclic hydrogen-bonded pentamers, which combine with simultaneously formed FcCOOH dimers to form two-dimensional quasicrystallites that exhibit local five-fold symmetry and maintain translational and rotational order (without periodicity) for distances of more than 400 ångströms." The authors (S. Alex Kandel and 7 collaborators, from the Notre Dame Chemistry and Biochemistry, and Chemical Engineering departments) remark that "FcCOOH represents an entirely new class of quasicrystalline materials, and is the only one in which molecular self-assembly results in five-fold symmetry." 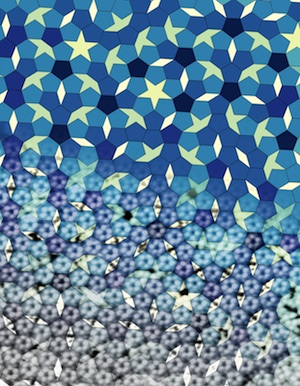 An Escheresque representation of the intermediate-range geometric isomorphism between a FcCOOH quasicrystal and a Penrose tiling. Larger image. Image courtesy of Alex Kandel.

Kandel et al. analyze a scanning tunnelling micrograph of the structure by overlaying a pentagon on each pentamer. "... the pentagons and their interstitial spaces match the shapes in a Penrose 'P1' tiling (pentagon, rhombus, boat and star), with only a few small gaps in evidence. A number of intermediate-range structures exactly mirror those of a Penrose tiling. As in the Penrose tiling, orientational ordering of pentagons in the experimental image is nearly perfect, with only two directions observed." Globally the match is not complete. "Differences between the Penrose tiling and the FcCOOH monolayer include the small gaps described above and the presence of relatively more rhombuses and fewer stars, as well as the prevalence of pentagons with four other pentagons immediately adjacent. In a Penrose tiling, pentagons may have two, three or five immediate neighbours, and two adjacent pentagons cannot have the same number of neighbours. Replicating these constraints would be difficult with pairwise interactions, and this probably explains differences between the monolayer and Penrose structures."

"Both Genders Think Women Are Bad at Basic Math"

John Bohannon posted an item with that title on the Science NOW website, March 10, 2014; he is referring to a PNAS article How stereotypes impair women's careers in science, by Ernesto Reuben, Paola Sapienza, and Luigi Zingales, posted online that same day. Bohannon presents the research as growing from a 2008 study, "Culture, Gender and Math," published in Science, which summarized its findings: "Analysis of PISA results suggests that the gender gap in math scores disappears in countries with a more gender-equal culture," and in which Sapienza and Zingales participated. If that is so, then why are women so under-represented in mathematics and science careers? Here's how Bohannon reports the new research: "A study of how both men and women perceive each other's mathematical ability finds that an unconscious bias against women could be skewing hiring decisions, widening the gender gap in mathematical professions like engineering." And the main results: "Men and women employers alike revealed their prejudice against women for a perceived lack of mathematical ability. When the only information that the employers had was a photograph of the candidate, men were twice as likely to be hired for the simple math job, no matter whether it was a man or woman doing the hiring. ... The hiring bias did not disappear when candidates self-reported their ability on the task, in part because women tended to underestimate their ability while men tended to boast. And even when the employers received accurate information about the actual performance of the candidates, the bias did not fully disappear. The more prejudiced a person was, as measured by the Implicit Association Test, the less likely they were to correct their bias."

"March Madness" is what we call the annual NCAA basketball tournament, in which 64 teams compete in a binary "bracket" elimination format. This year, the "Final Four" in scheduled for April 5 and the championship for April 7. The public's mind has been wonderfully concentrated on the outcomes of the 63 games by the offer of a $1 billion reward for a "perfect bracket," i.e. the prediction of all 63 winners. And mathematics has entered the search for how to improve one's odds from one in 9 quintillion to something less infinitesimal, largely through the efforts of Tim Chartier of Davidson College. As Eric Chemi describes it in Businessweek ( "A Math Professor Turns Better Brackets Into Homework," March 19, 2014) Chartier's "phenomenally accurate system for predicting the National College Athletic Association tournament ... started out as a homework assignment for his students, but the results were so good that he turned it into an area of research. His bracket predictions have reached the 99th percentile in pools with millions of people." Chartier ran a bracketology workshop March 13 at MoMath, the Museum of Mathematics in New York. Mary Pilon has the story in the New York Times, March 15: "Typically, when the worlds of math and sports collide, name calling, noogies and maybe even a wedgie follow. But that was not the case Thursday night at the National Museum of Mathematics in Manhattan, where 50 would-be mathematicians huddled in a windowless classroom to harness the power of linear algebra and complex computer codes to predict the outcome of each of the 67 [sometimes the "First Four" play-in games are also included in the bracket] games in the N.C.A.A. men's basketball tournament." Chartier's MoMath presentation is available on YouTube.

More MoMath in the Times

On March 20, 2014, the New York Times ran a special section on museums, including a piece, "Start-Up Success Isn't Enough to Found a Museum," by David Wallis, on what can go wrong (most common mistake: "Fixating on bricks and mortar at the expense of compelling programming and a potent marketing plan," according to an expert). One success story Wallis presents is MoMath, the National Museum of Mathematics in New York; MoMath accounts for three, one full-width, of the pictures illustrating the article. He describes how the four founders "staged a traveling exhibition before opening in New York in 2012" ("[L]ike theater producers who tinker with a new play on the road before raising the curtain on Broadway"), which enabled them "to refine exhibits and brainstorm with experienced executives at science centers." And other good moves. "The museum attracted 173,225 visitors in its first year" exceeding estimates by 155% and resulting in "staffing shortages that the museum has alleviated but is still working to resolve."

Previous (and also very positive) Times coverage of MoMath was picked up in this column here.