Mathematicians on the gridiron

First there was Frank Ryan, the quarterback. As Wikipedia has it, "Although he led the [Cleveland] Browns to their last National Fooball League title in 1964, Ryan is best remembered for being perhaps the only Ph.D. in mathematics to play in the league, completing a doctorate at Rice University. ... With his accurate throwing arm, his 14.7 yards per completion still ranks [him] as one of the all-time leaders." Now we have John Urschel. NPR's blog "The Two-Way" ran a piece about him on March 20, 2015: John Urschel, Ravens Offensive Lineman, Publishes Math Paper. The author, Krishnadev Calamur, admits to being "poor at math" but posts a link to Urschel's arXiv preprint and the abstract in its entirety (the paper describes an algorithm "for fast computation of the Fiedler vector of a graph Laplacian, namely, the eigenvector corresponding to the second smallest eigenvalue"). Calamur also quotes from "Why I Still Play Football", an essay Urschel wrote for The Players' Tribune, March 18, 2015, where he explains that he doesn't need the money --"... the things I love the most in this world (reading math, doing research, playing chess) are very, very inexpensive" -- but that "I've fallen in love with football and the physical contact associated with it."

On February 3, 2015 Randal Olson, a graduate student at MSU, posted "Here's Waldo: Computing the optimal search strategy for finding Waldo" on his blog. The strategy sought here is an optimal path through the 68 known published positions of Waldo (an example), i.e. the solution to a traveling salesman problem; Olson chose to attack it by a genetic algorithm, starting from a random path through all 68 positions, and "always trying something slightly different from the current best solution and keeping the better one -- until they can't find a better solution any more."

One of the steps in the genetic algorithm for finding the optimal path between the 68 Waldo sightings; and the final result. Animated GIF of the entire process.

On March 8, Olson posted "Computing the optimal road trip across the U. S." A reporter from Discovery News had seen the Waldo posting and asked about a similar plan for an optimal route visiting every state in the country; this became refined to a trip visiting one National Monument or the equivalent in every one of the contiguous 48, plus DC and an extra stop in California to make 50. The result: 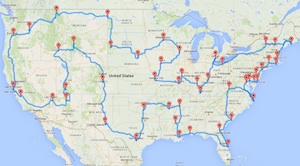 An optimal road trip visiting one nationally recognized site in each of the contiguous 48 states (plus DC and an extra stop in CA). Larger, interactive image. Images courtesy of Randal Olson.

Besides Discovery News, the story was picked up by the "Wonkblog" in the online Washington Post, by the "Stuff We Liked" blog in the online New York Times, and elsewhere. For a closer look at the underlying math, see the USA 50 page on Bill Cook's TSP website at the University of Waterloo.

Books about the mathematical life, reviewed in Nature

Amir Alexander (History, UCLA) reviewed two books by mathematicians for the March 5, 2015 issue of Nature. His title, "Mathematics: Groping in the dark for glimpses of beauty" suggests correctly that we are going to hear more about the experience of doing mathematics than about mathematics itself. The works examined are Birth of a Theorem: A Mathematical Adventure by Cédric Villani and Mathematics Without Apologies: Portrait of a Problematic Vocation by Michael Harris. As Alexander explains, "Perhaps more than any other field, mathematics pulls the practitioner away from the 'normal' world of things and people into a strange alternate universe, in which we catch glimpses of beauty and coherence, but spend most of our time groping in the dark." He sees both of the books as addressing the split between these two worlds.

From Alexander's reading of Birth of a Theorem we learn that research on a problem (in this case, the full mathematical explanation of Landau damping) is a "single-minded quest," but at the same time "mathematics can be an intensely social activity. The book is sprinkled with brief, telling portrayals of mathematicians and physicists past and present."

Harris' book by contrast is presented as "a kaleidoscope of philosophical, sociological, historical and literary perspectives on what mathematicians do, and why." The title, Mathematics Without Apologies, clearly positions this work as a response to G. H. Hardy's A Mathematician's Apology; and in fact we read: "What about the lauded beauty of mathematics? Perhaps, Harris concedes, but when mathematicians talk about beauty, what they mean is pleasure. ...   Mathematicians ... do what they do because of the enormous pleasure it brings them."

Stephen Strogatz (Cornell) contributed "Why Pi Matters" to the March 13, 2015 New Yorker. "Every March 14th, mathematicians like me are prodded out of our burrows like Punxsutawney Phil on Groundhog Day, blinking and bewildered by all the fuss. Yes, it's Pi Day again." And he adds: "Just stay off the streets at 9:26:53, when the time will approximate pi to ten places: 3.141592653." Stogatz quickly runs through the formulas involving $\pi$ that we learn in school and that most of us forget, and brings us to the question: "Why do mathematicians care so much about pi?" His answer is: "The beauty of pi, in part, is that it puts infinity within reach." For example, "The digits of pi never end and never show a pattern. They go on forever, seemingly at random --except that they can't possibly be random, because they embody the order inherent in a perfect circle." He quotes the formula $\pi/4 = 1-1/3+1/5-1/7+1/9-1/11+\cdots$ that "connects all odd numbers to pi, thereby also linking number theory to circles and geometry. In this way, pi joins two seemingly separate mathematical universes, like a cosmic wormhole."

But there's more: "What distinguishes pi from all other numbers is its connection to cycles." Strogatz has The New Yorker print out the equation for a Fourier series $$x(t)=\sum_{k=0}^{\infty}a_k \cos(2\pi kt/T)+b_k \sin(2\pi kt/T)$$ [this must be a first] as an "all-encompassing representation of any process, $x(t)$, that repeats every $T$ units of time." He explains that "Pi is inescapable because cycles are the temporal cousins of circles; they are to time as circles are to space. Pi is at the heart of both."