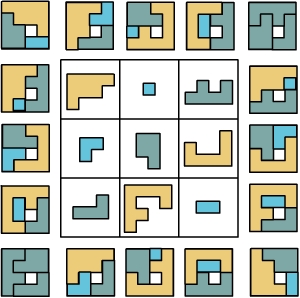 A 3x3 geomagical square: rows, columns and diagonals can be "added" to assemble the same shape, in two essentially mirror-image ways. Note that there is one element in the array with each area from 1 to 9. Lee Sallows discovered 4370 different geomagic squares with this property and the same target shape: a 4x4 square missing one central tile. Image adapted from #2 in Sallows' gallery.

The Observer, the Sunday sister of The Guardian, reported (April 3, 2011) on Lee Sallows and his research into "Geomagic Squares." Sallows had the intuition that magic squares (square arrays of numbers which give the same sum column-wise, row-wise and diagonally) could be instantiated geometrically, with the added complication that not only did the areas of the entries have to give the same total, but that the entries themselves had to assemble to give the same shape, column-wise, row-wise and diagonally (note that for Sallows, a shape and its mirror-image are interchangeable). The article, "Magic squares are given a whole new dimension," by Alex Bellos, includes a survey of latin and graeco-latin squares (see the Feature Column on this topic) and describes some of Sallows' discoveries: "'It was a very complicated business,' he said. Using a computer it took a long time to find shapes that worked and when he did: 'I really fell off my chair. ... It was the complete opposite of what I expected. I was looking for something incredibly rare but discovered it wasn't rare at all.'" There is only one 3x3 magic square (up to rotation and reflection) that uses all the numbers from 1 to 9.

"But when Sallows filled his 3x3 geomagic square with nine polyominoes that have areas from 1 to 9 --that is, shapes made from one unit square, two unit squares, three, and so on until nine unit squares-- he found ... 4370 geomagic squares where the target shape is a 4x4 square missing one central piece." This is the configuration illustrated above.

Early childhood math in the Times

On March 31, 2011 the New York Times ran an article by Rachel Cromidas of the Chicago News Cooperative, with the title: "Teaching Little Fingers New Math Tricks." The children here are at the pre-school level, and the story is a project, organized by the Erikson Institute with the McCormick Foundation, to "lay the foundation" for future learning of arithmetic. The strategy is to enlist the children in "concrete, hands-on" tasks involving measuring (e.g. "searching for objects the same length as their hands"), following patterns and sorting. Erikson has been sending coaches into pre-school and kindergarten-level classrooms since 2007; 60-80 teachers have participated. Part of the job is to sensitize the teachers to the children's need for mathematical activity, and to enable them to meet it. Cromidas quotes Jennifer McCray, the director of Erikson's math project: "We have done a pretty good job in early childhood and elementary at teaching literacy. Mathematics has been neglected. We have a lot of early-childhood teachers who love kids and may be very good teachers, but they're not confident in math." She quotes a teacher: "I have gotten great results. We've been talking through ideas and making my practice better." But there is no mention of any kind of follow-up evaluation of the impact of these interventions on the actual children.

The "innocent, unconscious" biases that deflect girls from math

"Psych-out Sexism: The innocent, unconscious bias that discourages girls from math and science" by Shankar Vedantam ran in the online Slate magazine on March 1, 2011. Vedantam starts with a recitation of the familiar facts: "Less than one in five professors of science and math at top research universities in the United States is a woman. The gender distribution of engineers at top Silicon Valley companies is similar to the gender distribution of the audience at your average strip club." He links to coverage of the celebrated Lawrence Summers episode, and tells us that most Americans believe that "Anyone can become a scientist or an engineer if she has the necessary interest, determination, and talent. If fewer women than men walk through those doors of opportunity, it has to be because fewer women than men have the necessary interest, determination, and talent." Then he brings on stage Jane Stout, Nilanjana Dasgupta, Matthew Hunsinger, and Melissa A. McManus, psychologists at UMass, Amherst, who have been investigating the power of unspoken factors in shaping women's performance, and whose experiments show how the dearth of women in instructional roles perpetuates itself from one academic generation to the next.