Taki's Magazine ("Our only ideology is to be against the junk culture foisted upon us and mirages of a new world order") posted, on April 5, 2012, "The Talk: Nonblack Version" by John Derbyshire, at that time a columnist affiliated with the National Review. A flippant and contrarian take on the news, engineered to be entertaining, is Taki's signature; only this time the flippancy went too far. Derbyshire, for example: "Thus, in those encounters with strangers that involve cognitive engagement, ceteris paribus the black stranger will be less intelligent than the white." Beneath the genteel erudition (ceteris paribus!) is a clearly racist opinion. Then: "There are, for example, no black Fields Medal winners. While this is civilizationally consequential, it will not likely ever be important to you personally. Most people live and die without ever meeting (or wishing to meet) a Fields Medal winner." One could analyze the cavalier attitude towards science that is part of Derbyshire's mid-Atlantic upper-class persona, but here he brings professional mathematics into his argument, and here he aroused the attention of Jonathan Farley, a black American mathematician. Farley answered with "Black mathematicians: the kind of problems they wish didn't need solving", on the website of The Guardian. "Derbyshire implies that the absence of a black winner means that black people are incapable of genius. In reality, black mathematicians face career-retarding racism that white Fields medallists never encounter." And he gives examples. Among them:

Farley ends with a quotation from Stephen Jay Gould: "Few tragedies can be more extensive than the stunting of life, few injustices deeper than the denial of an opportunity to strive or even to hope, by a limit imposed from without, but falsely identified as lying within."

Jonathan Farley was susbequently (April 18, 2012) interviewed on the topic by John Hockenberry on Public Radio International's "The Takeaway."

John Derbyshire is no longer affiliated with the National Review.

Frobenius on my mind

"The Geometric Structure of the Brain Fiber Pathways," by Van J. Wedeen (MGH) and seven collaborators, appeared in the March 30, 2012 Science. From the abstract: "We ... analyzed relationships of adjacency and crossing between cerebral fiber pathways in four nonhuman primate species and in humans by using diffusion magnetic resonance imaging." The result: with "strong cross-species homology, the cerebral fiber pathways formed a rectilinear three-dimensional grid continuous with the three principal axes of development." 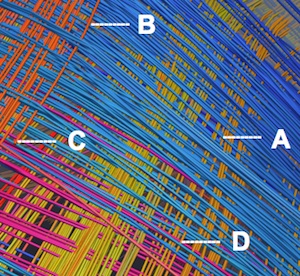 This image, an annotated detail of a larger and higher resolution image (courtesy of Van Wedeen) of pathways of the sagittal stratum of the rhesus monkey occipital lobe, shows the most remarkable aspect of the team's discovery: the fibers are organized into three sets of orthogonal sheets that are interwoven into 2-dimensional strata just like the lines in a three-dimensional mathematical grid. The image shows a sample of 2 of the three sets: one, call it $X$, colored blue and purple, and another, $Y$, colored yellow and orange. "Interwoven" means that if an $X$-fiber $x_1$ intersects two $Y$-fibers $y_1$ and $y_2$, and $y_1$ intersects another $X$-fiber $x_2$, then $y_2$ and $x_2$ must also intersect. For example a blue fiber meets an yellow fiber at A and an orange fiber at B. The orange fiber meets another blue fiber at C. Then that second blue fiber and the original yellow fiber must meet: they do at D. As the authors note, this configuration is highly unlikely in nature. It can be destroyed by a small deformation of the direction fields generating the X and Y families. This mathematical fact, and the occurence of the phenomenon in the brains of all the species surveyed, underline the significance of the discovery. An image showing elements of all three families, as well as an explanation of how these images were obtained, are part of the Science report.

This finding has a mathematical consequence, described towards the end of the report: "By the Frobenius theorem [they reference the Meisner-Thorn-Wheeler Gravitation and William Thurston's Three Dimensional Topology and Geometry] any three families of curves in 3D mutually cross in sheets if and only if they represent the gradients of three corresponding scalar functions. Accordingly, we hypothesize that the pathways of the brain follow a base-plan established by the three chemotactic gradients of early embryogenesis. Thus, the pathways of the mature brain [present] an image of these three primordial gradients, plastically deformed by development."

The April 13, 2012 issue of Science has a Special Section on Computational Biology. A couple of the reviews describe the various mathematical approaches that have been and can be useful.