To appear in Knowledge-based Systems, and available online since April 12, 2017, is "Topological invariants can be used to quantify complexity in abstract paintings," by Elsa M. de la Calleja and Roberto Zenit (UNAM, Mexico). "We propose the use of a new technique to quantify complexity in abstract paintings using a well-established mathematical tool: algebraic topology." Specifically, they reduce an abstract painting to a black-and-white pattern, consider the totality of the black regions as a topological space $X$, and calculate the first two Betti numbers $\beta_0(X), \beta_1(X)$. "Broadly speaking $\beta_0$ measures the number of connected regions in a region. Single drops that do not touch other traces are counted as separated regions. As more traces or drops are deposited on the canvas without overlapping one another, $\beta_0$ increases. .. On the other hand, the second Betti number, $\beta_1$, measures the number of holes in a region." 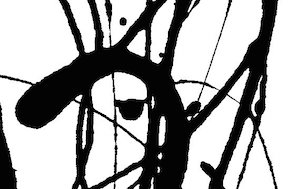 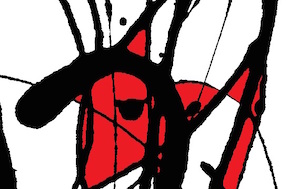 An example of De Galleja and Zenit's analysis. Top: a detail from a Jackson Pollock painting (Number 14: Gray, 1948) reduced to black and white. Center: same image with three connected components picked out and identified by color. Bottom: same image where each of the 19 "holes" counted by $\beta_1$ is filled in with red. Images courtesy of Roberto Zenit.

De Galleja and Zenit apply their algorithm to a number of "synthetic" images generated with randomly placed straight-line segments, and conjecture that "the maximum complexity of an image can be found with the values of $\beta_0$ and $\beta_1$ are approximately the same: there is a certain balance between individually placed lines and the crosses that produce holes among them."

The authors go on to analyze 29 paintings by Jackson Pollock. "Images with only a few colored well-defined dark strokes (or lines) over a light background were chosen. We selected ... works ... from the dripping period that fulfilled this requirement, which include paintings made from 1946 until 1951." These include some well known paintings from The Museum of Modern Art, the Metropolitan, the Guggenheim, etc. They display their calculations of $\beta_0$ and $\beta_1$ (normalized for picture area $A$), year by year.

A cellular automaton on a lizard's back

"A Lizard With Scales That Behave Like a Computer Simulation," by Steph Yin, ran in the New York Times, April 12, 2017. As Yin explains it, "The ocellated lizard ...is born rusty brown with white polka dots. Within a few months, its skin begins to change into a dizzying, labyrinthine array of black and bright green pixels. By the time the lizard has sexually matured, reaching up to two feet in length, some 4,000 scales along its back are all black or green, possibly to accommodate a habitat change between early life and adulthood. Through the rest of the lizard's life, many of these scales will continuously flip between black and green. These outfit changes are dazzling in their own right. But even more surprisingly, the lizard's patterns may unfold like a computer simulation, according to a study published in Nature on Wednesday." 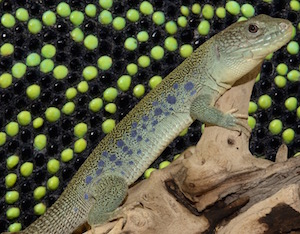 An ocellated lizard (Timon lepidus) shown against a photograph of the scales on the center of its back. Image courtesy of Michel Milinkovitch.

Cellular automata, Yin tells us, were discovered in the 1940s by John von Neumann and Stanislaw Ulam. The best known example is probably John Conway's Life: a grid where each square can be colored black or white; colors are reasigned at each tick of the clock according to rules which determine the color of a square at time $T+1$ as a function of its color, and the colors of all the squares that touch it, at time $T$. The initial coloring and the rules that determine the transition from each coloring to the next are like the initial state of a computer and a stored program which determines the state of the computer at each subsequent instant. In fact it was already understood by Von Neumann that every computer program could be exactly simulated by a cellular automaton. The surprising discovery, made by Michel Milinkovitch and colleagues (including the mathematician Stanislav Smirnov) at the University of Geneva, is that during a part of an ocellated lizard's life, the coloring of the scales on its back (black or green) is formally a cellular automaton: the rules are probabilistic and adapted to a quasi-hexagonal grid. The result of the rules, as they explain in their article "A living mesoscopic cellular automaton made of skin scales" (Nature, April 13, 2017), is that "During the transition from the juvenile to the adult pattern, the proportion of black versus green scales increases until green scales tend to exhibit four black and two green direct neighbours whereas black scales tend to have three black and three green direct neighbours."

Images of the same area on the back of an ocellated lizard, at three ages. The orange arrows pick out two instances of a green cell, with three green neighbors, changing to black. Images courtesy of Michel Milinkovitch.

What is it in the biology of the lizard's skin that produces cellular-automaton behavior in the coloring of the scales? The authors went back to Alan Turing's "The chemical basis of morphogenesis" (1952). Turing explains how a fairly simple reaction-diffusion equation, relating concentrations of color-producing chemicals, can produce patterns (e.g. spots and stripes) in animal's coats. In Turing's model coats are smooth and diffusion is uniform. The authors show that adapting Turing's model to a scaly medium where diffusion is difficult across the boundaries between scales does in fact produce the same color patterns as a cellular automaton. "[Our] analyses provide the first formal quantitative demonstration that a discrete RD, with a discrete von Neumann's CA behaviour, can be derived from Turing's continuous RD equations superposed on a lattice of borders at which diffusion is substantially reduced."

That's the message presented by Jo Boaler, Professor of Mathematics Education at Stanford, in an opinion piece on "motto," Time's new website for young women. "Research tells us that lecturers typically speak at between 100 and 125 words a minute, but students can take note of only about 20 words a minute, often leaving them feeling frustrated and defeated. ... The irony of the widespread emphasis on speed in math classrooms, with damaging timed tests given to students from an early age, is that some of the world's most successful mathematicians describe themselves as slow thinkers. In his autobiography, Laurent Schwartz, winner of the world's highest award in mathematics, described feeling 'stupid' in school because he was a slow thinker."

Boaler's own research leads her to state that "Women are more likely to reject subjects that do not give access to deep understanding." As she explains, this is exactly the kind of learning that we need to encourage in students of mathematics.

She concludes: "When mathematics classes become places where students explore ideas, more often than they watch procedures being rapidly demonstrated by a teacher or professor, we will start to liberate students from feelings of inadequacy."

Watch her TEDx Stanford talk: "How you can be good at math and other surprising facts about learning."