A zoologist (Michael Doebeli) and a mathematician (Iaroslav Ispolatov) at UBC teamed up to produce the report "Complexity and Diversity" in Science (April 23, 2010). Their goal is to explain "the origin and maintenance of biological diversity." Traditionally, the maintenance of diversity in any one aspect of variation ("one-dimensional phenotype space") is explained through frequency-dependent selection: rarer types have fewer direct competitors. In the simplest mathematical model, the logistic equation dφ/dt = rφ(1-φ/K) for a population φ with carrying capacity K becomes a logistic partial differential equation, with two variables t (time) and x (position in phenotype space); whether diversity is maintained or collapses to zero depends on the relative size of two parameters: a governs the competition kernel, which expresses how much individuals at different x values compete for resources; k governs the way in which the carrying capacity depends on x. In the author's formulation, if k > a "the dynamics of [the logistic partial differential equation] converge to a delta peak centered at x = 0" and all variation is lost; "Conversely, if k < a, competition is more localized in phenotype space as compared to the width of the carrying capacity curve, so that the frequency-dependent component of selection dominates" and variation is maintained. "In essence, this is the basis for the claim that strong frequency dependence can maintain diversity."

When multi-dimensional phenotype spaces are considered, then a and k become matrices A and K, which may be assumed symmetric. If A and K are diagonal, say

then diversity is maintained if and only if a11 > k11 or a22 > k22 ("the dimensionality alone has no effect on the maintenance of diversity"). The situation changes when A and K have non-zero off-diagonal elements (corresponding to interactions between phenotypic components). For example

can be simltaneously diagonalized to

so under the weak hypothesis that a12 and k12 are different, one of the new A-diagonal elements must be larger that the corresponding one from K, and "the condition for diversification is satisfied." They generalize to higher-dimension phenotypic spaces and conclude: "The message from this analysis is simple and general. ... any interaction between phenotypes ... strongly increases the propensity for diversification. In essence, this is a consequence of the mathematics of simultaneous diagonalization of quadratic forms." 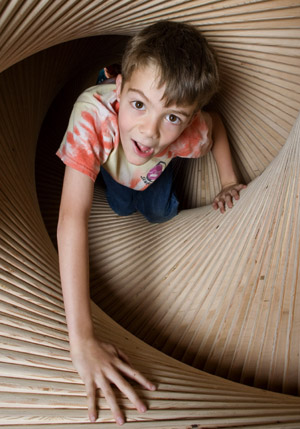 Under their "Random Samples" rubric (edited by Lauren Schenkman) the April 23 2010 Science ran this image illustrating the Geometry Playground, "a group of 20 exhibits opening 25 June at the Exploratorium in San Francisco, California." "Exhibit director Thomas Rockwell says the toys and structures combine 'hands-on with body-in geometry' to 'create a playground for body and mind.'" See more information about the exhibits. The show will be on view in San Francisco until September 6, and then will travel to St. Paul, San Diego, and elsewhere.

"Community Structure in Time-Dependent, Multiscale, and Multiplex Networks" appeared in the May 14 2010 Science. The team of five authors, led by Peter Mucha (UNC-Chapel Hill), devised an algorithm for detecting the presence and extent of communities ("groups of nodes that are more tightly connected to each other than they are to the rest of the network") in generalized networks. An important example is a multi-slice network, where the set of vertices is fixed and appears in each slice, but the connectivity matrix A = (Aij) , where Aij = 1 if vertex i and vertex j are connected by an edge, and = 0 otherwise, varies from slice to slice, say Aijt in slice t ; and an additional set of interslice connectivity matrices Ci = (Cist) read 1 in place st if vertex i in slice s is connected to vertex i in slice t. Part of such a multi-slice network is shown in this figure:

For a single network the standard way of detecting communities is to partition the set of nodes into subsets C1, ... , CK, and to calculate the quality of this partition by Q1 + ... + QK, where Qk is the sum of Aij, for all pairs i and j in Ck, minus the sum of Pij, the expected weight of the ij edge under a specified "null model," i.e. some specified random assignment of edges to vertex pairs.

As the authors explain, this formulation is not adapted to a multi-slice network. But they were able to adapt for these purposes an algorithm of Labiotte et al, based on dynamics, and designed for detecting communities at different scales in a single network. "[B]y formulating a null model in terms of stability of communities under Laplacian dynamics, we have derived a principled generalization of community detection to multislice networks..." Dynamics is brought into the picture by imagining a random walk on the network (hence "Laplacian" in analogy with the usual random walk on an integer lattice and the heat equation). The authors formulate a system of linear differential equations expressing the time derivative of pit (the probability that the walk is at vertex i in slice t) in terms of the other pjs and the coefficients Aijt and Cist. The quality of a partition C1, ... , CK can then be defined in terms of its stability under the flow generated by this dynamical system, compared to an appropriately devised null model. The paper applies these constructions to analyze the Zachary Karate Club network, U. S. Senate roll call vote similarities and "a multiplex network of 1640 college students at a northeastern American university, including symmetrized connections from the first wave of this data representing (i) Facebook friendships, (ii) picture friendships, (iii) roommates, and (iv) student housing-group preferences."

A new use for instantons

Rites of Love and Math is a 26-minute silent film which premiered in Paris in April. As reported in the New Scientist's CultureLab blog (April 13, 2010), UC Berkeley Math professor Ed Frenkel "sacrificed his clothes and €100,000 to show the world the beauty of mathematics." The film is presented as a homage to the late Japanese actor, director and public personality Yukio Mishima, whose Yûkoku, also Rites of Love and Death, was recently discovered 35 years after it was made, and 30 years after Mishima's death. Yûkoku "depicted the ritual suicide, or hara-kiri, of an army officer following a last passionate encounter with his wife." In the new film "the soldier is replaced by a mathematician played by Frenkel. Having discovered the formula of love, and realised too late that in the wrong hands its power could turn to evil, he tattoos it onto his lover's belly during their last meeting, so as to preserve its beauty beyond his own impending demise." According to the item's author, Laura Spinney, the formula of love "is actually a simplified version of an equation [Frenkel] published in a 2006 paper on quantum field theory entitled 'Instantons beyond topological theory I.'"