"A physicist has formulated a mathematical theory that purports to explain why the universe works the way it does--and it feels like 'the answer'," according to Marcus du Sautoy's report in The Guardian, May 23, 2013. Du Sautoy is Professor of Mathematics at Oxford; the physicist in question is Eric Weinstein. Du Sautoy describes learning about the theory at a meeting with Weinstein two years ago ("at a bar in New York"): "As he took me through the equations he had been formulating I began to see emerging before my eyes potential answers for many of the major problems in physics. It was an extremely exciting, daring proposal, but also mathematically so natural that one could not but feel that it smelled right." One thing du Sautoy likes about the theory, which Weinstein calls Geometric Unity, is that "symmetry, my own field of research, is a key ingredient." For example, Weinstein's theory reveals "the presence of a new geometric structure involving a much larger symmetry at work, inside which the symmetry of the Standard Model sits."

An accompanying blogpost, "Roll over Einstein: meet Weinstein," by Alok Jha, Guardian science correspondent, gives some more information. Weinstein "proposes a 14-dimensional 'observerse' that has our familiar four-dimensional space-time continuum embedded within it." Dark matter, for example: "In the mathematics of the observerse there is no missing dark matter ... the mass only seems to be missing because of the 'handedness' of our current understanding of the universe ... [which] ... relies on a fundamental asymmetry between left-handedness and right-handedness in order to keep the observed particles very light in the mass scale of the universe." We can't see the dark matter because we live in a relatively flat part of the observerse, where "the left-handed and right-handed spaces would become disconnected and the two sides would not be aware of each other."

These announcements met with some scepticism on the internet, from Jennifer Oulette on her Scientific American blog ("Dear Guardian, you've been played"), and Andrew Pontzen in a New Scientist opinion piece ("Weinstein's theory of everything is probably nothing"). Their main reservation is that the publicity has come before any publication of the scientific details of the theory. But Jha tells us an ArXiV posting is in the works, so stay tuned.

One way or the other, there may be a mathematical bright side. Jha quotes Edward Frenkel: "Even independently of their physical implications, I believe that Eric's insights will be useful to mathematicians, because he points to some structures which have not been studied before, as far as I know."

Twin primes on NPR, and on Slate

From NPR's Weekend Edition (May 18, 2013): "University of New Hampshire professor Yitang Zhang announced this week that he has come close to solving a centuries-old problem: proving the twin prime conjecture. Host Scott Simon gets an explanation from Weekend Edition Math Guy Keith Devlin of Stanford University." (transcript). Devlin explains what a prime number is and gives examples of twin primes ("3 and 5, 11 and 13"). "The twin prime conjecture is a curiosity and it says that there are infinitely many pairs of primes which are just separated by two. ... It's not a world-shattering result, but it's a mathematically interesting result simply because it's a challenge. This is sort of a Mount Everest question that you just want to solve because it's out there." Simon asks about 'close': "I didn't know there was such a thing as close in math. I mean, my seventh grade would have been a lot different had I known that." Devlin: "[T]his new result by Yitang Zhang ... says that there are actually infinite many pairs of primes ... separated by no more than about 70 million." So 'close' is relative; but for "mathematicians who are used to thinking in terms of infinity, the fact that there's any finite bound is huge." Simon: "With respect for what the professor has done, or should I put it almost done, how does it make our life richer?" (LAUGHTER) Devlin "This probably doesn't." But he gives the example of encryption schemes based on number theory to show that "we should be very cautious about saying anything to do with prime numbers doesn't have applications."

Jordan Ellenberg (Math, University of Wisconsin), has a blog on Slate ("Do the Math. A mathematician's guide to the news"). On May 22, 2013 he posted "The Beauty of Bounded Gaps: A huge discovery about prime numbers -- and what it means for the future of math." Ellenberg situates the twin primes conjecture in "a remarkably fruitful point of view--we think of primes as random numbers". He goes on: "The primes are not random, but it turns out that in many ways they act as if they were. And "If you strew numbers at random, it's very likely that some pairs will, by chance, land very close together." The argument concludes: "And a lot of twin primes is exactly what number theorists expect to find no matter how big the numbers get--not because we think there's a deep, miraculous structure hidden in the primes, but precisely because we don't think so. We expect the primes to be tossed around at random like dirt. If the twin primes conjecture were false, that would be a miracle, requiring that some hitherto unknown force be pushing the primes apart." Lots more information in this very nice report!

What it feels like to be bad in math

This is the title of an article posted by Slate on April 29, 2013. The author is Ben Orlin, a high-school teacher in Oakland, who blogs about teaching math at Math with Bad Drawings. The subtitle, "My hazy, anxious, defensive procrastination made me a better teacher," summarizes the piece. Orlin describes the behavior of struggling students. "They miss class. They procrastinate. ... Even worse is what they don't do. Ask questions. Take notes. ... Are they trying not to pass?" Orlin claims that the most powerful underlying cause for this self-defeating behavior is, essentially, aversion to pain. "Math makes people feel stupid. It hurts to feel stupid. It's hard to realize this unless you've experienced it firsthand. Luckily, I have (although it didn't feel so lucky at the time). So here is my tale of mathematical failure."

Orlin recounts how he sailed through college math until, as a senior, he took a seminar in topology, and crashed. He tells us the whole sorry story, and then explains its relevance to his teaching problems: "Looking back, it's amazing what a perfect specimen I was. I manifested every symptom that I now see in my own students:

In Orlin's view, the root cause of failure is that "when the moment comes to confront our shortcomings and open ourselves up to teachers and peers, we panic and deploy our defenses instead. For the same reason that I pushed away topology, struggling students push me away now." He concludes: "Failing at math ought to be like any failure, frustrating but ultimately instructive. In the end, I'm grateful for the experience. Just as therapists must undergo therapy as part of their training, no math teacher ought to set foot near human students until they've felt the sting of mathematical failure." 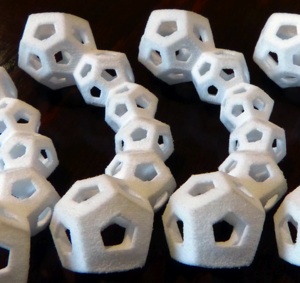 The 30-cell Puzzle. Five identical pieces, each a chain of six curvilinear dodecahedra, are to be assembled into the configuration below. 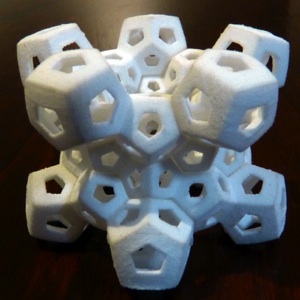 The 30 dodecahedra in the completed puzzle are the projection into 3-space of part (one quarter, in fact) of an object that can only exist completely in four dimensions. This object is the 120-cell, one of the six four-dimensional analogues of the five platonic solids. Just as the cube has six faces, all of which are squares meeting three by three at vertices, so this "regular polytope" is made up of 120 3-dimensional pieces, all regular dodecahedra, which share faces and meet three by three along edges, four by four at vertices. Lamb: "Schleimer says that he and Segerman started working on this model when they were studying a topological object called the Hopf fibration. The 120-cell arose naturally in their work, and they decided that they wanted to try to visualize it as an actual three-dimensional object, not just a computer representation or theoretical object in their minds." The Hopf fibration represents the 3-sphere (the boundary of a 4-dimensional solid ball) as a union of circles any two of which are linked. The 120-cell is topologically a 3-sphere, and Schleimer and Segerman's models show how the 120-cell preserves a feature of the Hopf fibration: it is the union of twelve linked circles, each consisting of ten dodecahedra. The five elements of the 30-cell puzzle are each part of one of those circles of dodecahedra; their intricate interlocking gives a nice sample of the structure of the entire polytope.

More information about the puzzle here.