The death of a beautiful mind 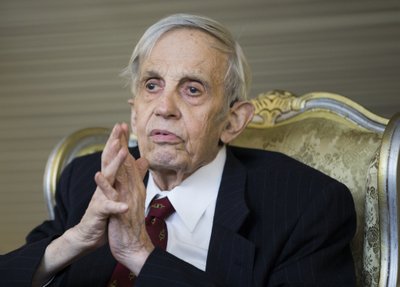 John Nash was not just one of the most original and significant mathematicians of the 20th century, he was certainly the one best known to the public. His life, with its brilliant beginning, its long, desperate middle and its glorious later years turned out to make an irresistible story: Sylvia Nasar's biography A Beautiful Mind was a best-seller, and the movie went on to make his personal saga familiar to millions of people who otherwise might never have heard his name. So when he and his wife Alicia died in a crash on the New Jersey Turnpike on May 23 (in an airport taxi, returning from his Abel Prize ceremony in Oslo) it was front-page news worldwide. Most valuable are the pieces where journalists contacted sources with personal knowledge of John and Alicia.

Manil Suri is a mathematician, a novelist and an occasional Op-Ed contributor to the New York Times. On May 2, 2015 they ran "Mathematicians and Blue Crabs," his report on the art and science of mathematical modeling of populations, and how this has played out recently in regulating the harvest of blue crabs, "the most valuable commodity" in the waters of Chesapeake Bay. (Suri teaches at the University of Maryland, Baltimore County). He asks: "how much can formulas tell about these creatures' unpredictable lives?" He starts at the beginning: "One of the simplest population formulas specifies that the output is some number $R$ times the input" and explains how $R>1$ leads to exponential growth, like compound interest, and $R<1$ to a population that would "decrease at each step and eventually die out." The next more complicated model: "By setting $R$ to decrease as population increased, the 19th-century mathematician Pierre-François Verhulst formulated a model in which the population first grew almost exponentially, but eventually stabilized at the maximum carrying capacity of the environment." Models now take many more factors into account. "The math behind these formulas may be elegant, but applying them is more complicated." A big problem is the quality of the data fed into the formula. "For instance, it was long believed that a blue crab's maximum life expectancy was eight years." But "this estimate .. turned out to be much too high." And since the estimate had been used in calculating crab mortality from fishing, it had led to unjustified restrictions on the harvest. So "what chance is there to find an accurate quantitative formula?" Suri answers: "In some sense, that might be the wrong goal anyway. Randomness is built into biological processes, so predicting a population is never going to be like calculating the interest on a bank account. The best we can do is use available science to make educated guesses about various outcomes."

"What Einstein Should Have Known"

is the title of a May 13, 2015 posting by John Farrell on the Forbes magazine website. Farrell covers science and technology for their "Pharma & Healthcare" blog, and he's sharing with us insights gleaned from John Gribbin's recently published Einstein's Masterwork: 1915 and the General Theory of Relativity (Icon Books, London, 2015). Part of Gribbin's story, as retold by Farrell, is that "it took Einstein a decade to formulate and publish his theory of gravitation--between 1905 and 1915. But if he'd been a little more acquainted with the history of mathematics, he could've saved himself a few years and a whole lot of stress ... . Once his intuition told him that gravity could be described as a property of space and time ... Einstein knew he would need a very special branch of geometry to model it. What he didn't know--and should have ... is that this branch of mathematics had already been invented long before he was born." Gribbin mentions Gauss but focuses on Riemann, in this passage quoted by Farrell:

The story continues with William Clifford; another quote from Gribbin: "Einstein was unaware of his forebears in non-Euclidean geometry. And from 1907, when he first began work in earnest on his new gravitation theory, until 1912, Einstein went down many blind alleys before he realized he would need a set of field equations based on Riemann's and Clifford's work in order to finalize a testable theory. The rest is history ..."

[This is not the place for an analysis of Gribbin's book, but the distinction between "dents" and "hills" is not auspicious. -TP]