A virtual trisectrix in space?

Orbital resonances are simple numerical relationships between the periods of nearby planets or satellites. A salient example in the solar system is given by three of Jupiter's moons: during every single revolution by Ganymede, Europa makes two and Io four (nice animation here). Recently predicted and even more recently observed is a retrograde 1:1 resonance. This occurs with Jupiter and the asteroid 2015 BZ509, as reported by Paul Wiegert, Martin Connors and Christian Veillet in Nature, March 30, 2017. The planet and the asteroid have the same period, but go around the Sun in opposite directions. 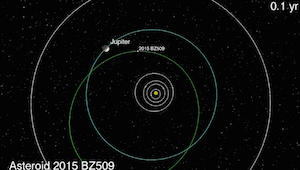 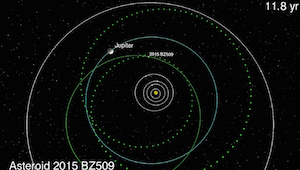 Top: near the start of a year on planet Jupiter, seen from above the Solar System. Jupiter traverses its (blue) orbit counter-clockwise, while Asteroid 2015 BZ509 traverses its (green) orbit clockwise, both with the same period. Bottom: at the end of the year (11.8 Earth-years later) Jupiter and the asteroid are back where they started. Seen from Jupiter, the asteroid has traced out the dotted green path shown. This is the "trisectrix." Images are stills from an animation, courtesy of Paul Wiegert.

The path of BZ, as seen from Jupiter (the analogue of the epicyclic path of Mars as seen from Earth) is characterized as a "trisectrix" in the News & Views commentary in that same issue of Nature. (Those authors, Helena Morais and Fathi Namouni, were the first to work out the possibility of this type of resonance, back in 2013). Strictly speaking there is only one trisectrix, the planar curve with polar equation $r=1+2\cos\theta$, related in fact to angle trisection (nice explanation at 2000clicks.com). The virtual path of 2015 BZ509 is not even planar.

"The motion of [2015 BZ509] as seen looking from the side along the plane of Jupiter's orbit. The axes XR ... and ZR are the Cartesian axes of the frame that rotates with Jupiter, with XR along the Sun-Jupiter line and ZR perpendicular to Jupiter's orbital plane. ... Jupiter is indicated by the blue filled circle. The path of the asteroid is shown in red when the asteroid is above Jupiter's orbital plane (ZR$\,=0$) and in orange when it is below ... ." Image from Nature 453 687-689, used with permission.

That was the title for a report by Christopher Mele in the New York Times (May 15, 2017; as the Times put it elsewhere, "By Counting His Chicks, Texas Teenager Tops Pecking Order in Math Contest"). "A 13-year-old boy from Texas won a national math competition on Monday with an answer rooted in probabilities -- and a dash of farming. The boy, Luke Robitaille, took less than a second to buzz in at the Raytheon Mathcounts National Competition with the correct answer." Mele gives us the chicks problem and a couple more from past competitions. (Answers below).

"'You get to think about things and move logically toward solving problems,' said Luke, who came in second place at last year's competition."

The Raytheon competition, Mele tells us, is "a way to promote skills in science, technology, engineering and mathematics -- known as the STEM fields." He reminds us of the current national lack of STEM professionals and how, according to the President's Council of Advisors on Science and Technology, to maintain our "supremacy in science and technology" we will have to "increas[e] the number of students earning STEM degrees by about 34 percent annually."

Mele also spoke with Lou DiGioia, "executive director of Mathcounts, [who] said the contestants' achievements were the results of endless hours of practice and coaching and not necessarily innate math abilities. 'These are not natural prodigies,' he said. 'Nobody watches a basketball game and says, "Oh, LeBron James was born that way.'" (Answers: 25, 67, 21).