"The unplanned impact of mathematics"

A group of mathematicians from the British Society for the History of Mathematics collected "seven examples of mathematics with impact the original discoverer could not have planned;" they are presented by Peter Rowlett (Birmingham) in a "Comments" piece with this title in the July 14, 2011 Nature. "Trying to solve real-world problems, researchers often discover that the tools they need were developed years, decades or even centuries earlier by mathematicians with no prospect of, or care for, applicability." The seven examples he presents:

DNA computation used to be tailored explicitly to the problem at hand (see for example the adaptation to the Directed Hamiltonian Path Problem presented on this site). Since 2000 progress has been made in constructing more general-purpose DNA computers, using reversible strand displacement, a process in which "a single-stranded DNA signal can first bind to a partially double-stranded complex by a single-stranded domain called a toehold, then release the originally bound strand after branch migration has occurred. Thus, an output signal can be activated upon the arrival of an input signal, and the reaction rate can be controlled by the length of the toehold." This quote is from a report in the June 3, 2011 Science, by Lulu Qian and Erik Winfree (Caltech), which describes an especially simple implementation of this concept; it allows them to build and test a DNA computer some five times more powerful than those previously known. Their simple mechanism is the "seesaw" illustrated here (they also describe two others, "threshold" and "reporter," of the same nature).

The seesaw. The colors represent different strands of DNA: S2, S5, S6 and T the "toehold". Here T* is the Watson-Crick complement of T, etc.; the arrows show orientation. The T segment of word w2,5 locks onto the toehold of gate G5:5,6; the S5 strand from w2,5 zips to the S5* strand, displacing the gate's original S5 and freeing word w5,6. The gate is thereby transformed into G2,5:5; the process can be reversed. Image adapted from Qian and Winfree.

To illustrate the potential of their approach, Qian and Winfree give the "wiring diagram" of a DNA computer that calculates the integer part of the square root of a 4-bit binary number, and show the machine at work. A run takes 10 hours now, but they expect that moving from working in a solution to circuitry organized on a surface will speed things up. They end with the intriguing suggestion that "strand displacement circuitry may play an important, although still obscure, regulatory role within biological cells."

"Supramolecular Archimedean Cages Assembled with 72 Hydrogen Bonds" appears as a report in Science for July 22, 2011. The authors, a team of four led by Michael Ward (Chemistry, NYU), describe the rational design of a cage made from 8 hexagonal molecular tiles, four of each of two types, joined so as to form the 8 hexagonal faces of a truncated octahedron.

The two hexagonal tiles (yellow: a tris(guanidinium)nitrate cluster; green: a hexa(4-sulfonatophenyl)benzene) are designed to bond along alternate edges, and so naturally assemble and fold into a truncated octahedron.

The remaining 6 faces (squares) are holes in the polyhedral surface, allowing the cages to lock together in a 3-dimensional rectangular crystalline assembly, which "exhibits an ability to encapsulate a wide range of differently charged species, including organic molecules, transition metal complexes, and 'ship-in-a-bottle' nanoclusters not observed otherwise." 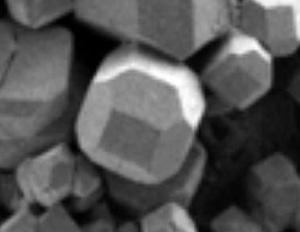 Scanning Electron Micrograph of crystals formed from our octahedral cages. Note that the crystals, while combinatorially different in appearance, preserve all the symmetries of their octahedral consituents. Images courtesy of Michael Ward.

In the Supplemental Materials section of their report, the authors go through all the Archimedean polyhedra: the truncated octahedron is the only one with hexagonal faces which can be colored green and yellow so that each green abuts three yellows and vice-versa.

Math and Art in the Hamptons

"He taught her geometry, group theory, topology ..." She is the artist Dorothea Rockburne, whose full-scale retrospective ("In My Mind's Eye") runs at the Parrish Art Museum in Southampton until August 15, and he is the celebrated topologist Max Dehn, who ended up at Black Mountain College, in North Carolina, after World War II. Karen Rosenberg reviewed the show in the New York Times for July 22, 2011: Rockburne had already "experienced a kind of mathematical revelation" while still an art student in Montreal, "seeing the landscape as a set of universal priciples." At Black Mountain College in the early 1950s "her follow students included [Cy] Twombley, Robert Rauschenberg and John Chamberlain," but the main impact on her career came from her association with Dehn. Rosenberg is not enthusiastic about the way the show is hung, and has reservations about the way Rockburne integrates mathematical content into her work. "All these branches of mathematics run through the Parrish show ... but unless you are already fluent in these areas ... the numerical insights will be lost on you. You'll be left with paintings that yearn to be theorems and therefore disappoint." She does focus on a group of "very recent abstractions" where "axiomatic conviction gives way to optical pleasure -- which is another way of saying that the eye in Ms. Rockburne's mind makes contact with the ones in our faces."
Seven works from the show can be seen online thanks to SouthamptonPatch; a view of the installation appears in the online Times.