Knots and slipknots in protein molecules

"Conservation of complex knotting and slipknotting patterns in proteins," by Joanna I. Sułkowska, Eric J. Rawdon, Kenneth C. Millett, Jose N. Onuchic, and Andrzej Stasiak, appeared in the Proceedings of the National Academy of Sciences for June 26, 2012. Rawdon (Univ. of St. Thomas, Saint Paul MN) and Millett (UCSB) are mathematicians, the others are theoretical biologists. A protein molecule has a linear backbone, extending from a carboxyl C-terminus to an amino N-terminus. It is considered to have knot type $K$, in this study, when joining the two ends of this chain by line segments to a distant, random point gives $K$ as a most likely knot. The authors went through the library of all known protein structures, studying for each one the initial knottedness and how the knottedness varied as groups were clipped from the C- or from the N-terminus. A slipknot occurs when clipping moves a chain from an unknotted to a knotted configuration. (Think of snipping through the bows in a bow-tie and discarding the ends: you get a square knot). The tabulation of the changes in knottedness as one or the other end was clipped gives what the authors call the knotting pattern of a protein structure. 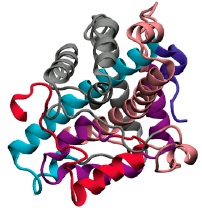 "The most complex protein knot currently known is formed by the backbone of $\alpha$-haloacid dehalogenase DehI. [Folded structure shown here]. DehI is a bacterial enzyme hydrolyzing carbon-halogen bonds and is therefore capable of biodegrading environmental pollutants such as herbicides and pesticides." Images from PNAS 109 E1715-E1723, used with permission. 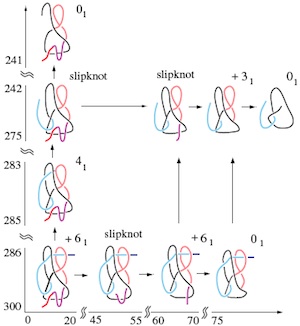 Why are there knots? The authors report: "In the majority of cases ... one is unable to determine the precise structural and functional advantages provided by the presence of knots." But they argue why such advantages must exist: "... we detected a strict conservation of complex knotting patterns within and between several protein families [groups of evolutionarily-related proteins] despite their large sequence divergence. Because protein folding pathways leading to knotted native protein structures are slower and less efficient than those leading to unknotted proteins with similar size and sequence, there must be an important physiological role of knots and slipknots in these proteins."

Plug for pure math in the Daily News

The New York Daily News ran an op-ed piece on July 8, 2012: "Math is more than the sum of its parts," by Edward Frenkel, the Berkeley mathematician, and Ronald Ross, superintendent of Greenburgh Central School District 7 in New York State. At the top is an eye-popping image of a collider event, with the caption "The Higgs boson discovery was made possible by mathematics," and in paragraph 2 we read "But one important aspect of this great discovery has been largely hidden from the public view: the fact that this elusive particle was a mathematical prediction, and its discovery a triumph for an increasingly underappreciated discipline." The article goes on remark that the current epidemic of mathematical illiteracy coincides with "math [being] more and more the source of power and profit and progress," leading to dire consequences like the "reckless misuse of mathematical models in the financial markets." Some of the blame goes to the "pursuit of high scores on standardized tests" in our public schools, where math becomes "treated as a chore when it is the most relevant subject of all." The solution they propose is for educators to join forces with professional mathematicians---the matching could be facilitated by an online platform---to inspire students' curiosity and "show them how a formula can be as elegant as a painting, a poem or a piece of music."

Frenkel and Ross refer to "a recent opinion piece in the New York Times" (undoubtedly this one by Sol Garfunkel and David Mumford) where "mathematics was compared to a dead language, and it was argued that most citizens would be better served by studying merely a few practical applications of math." "We disagree. The language of math is as vital as ever, and the way forward is to rediscover its innate beauty and possibility. Replacing rigorous study of mathematics with 'useful skills' is like teaching students how to paint a fence without ever showing them the paintings of Michelangelo and Picasso."

"Heavy use of equations impedes communication among biologists" is the title of a report in the June 25, 2012 Proceedings of the National Academy of Sciences, by Tim Fawcett and Andrew Higginson (University of Bristol). The authors ask why (in ecology and evolution) "many empirical studies build largely on other empirical studies with little direct reference to relevant theory," even though theoretical work is fundamental "for generating testable predictions and interpreting observations." They discovered that mathematics is the culprit: the use of mathematical equations has a significant negative effect on the scientific impact of a paper in those fields, with "papers receiving 28% fewer citations overall for each additional equation per page in the main text." And 35% fewer if one just counts citations from non-theoretical papers.

Fawcett and Higginson suggest how better communication might be established. One could "enhance the technical understanding of biology graduates by improving the level of mathematical training they receive." But this clearly is a long-term and time-intensive undertaking. Another way is for "those doing theoretical work to describe their models in a way that can be more easily digested by a diverse audience." For example, "add more explanatory text between the equations to describe carefully the underlying biological assumptions inherent in the mathematics." The problem here is that journals resist anything that lengthens articles. There is a bright spot in the research: they found that equations in an appendix don't count in discouraging citations. But the authors advise against moving all the equations into the attic: the risk is "that the main text then glosses over the fine details of the model's assumptions, which can have a big impact on how the predictions are interpreted."