Back in 1976 Douglas Hofstadter was a physics graduate student. His thesis addressed the problem of Bloch electrons in magnetic fields, which comes up in the analysis of the Hall effect. This effect, known since 1879, happens when a conductor in the $(x,y)$-plane is placed in a magnetic field oriented along the $z$-axis. Then a current flowing in the $x$-direction creates a voltage difference in the $y$-direction. The dependance of this Hall voltage $V_H$ on the voltage $V_x$ in the $x$-direction becomes intricate for high magnetic fields and low temperatures, due to quantization.

Bloch electrons are electrons in a periodic potential, for example in a crystalline lattice. If the conductor in the Hall effect has such a structure then, as Hofstadter writes in the published version of his thesis (Phys. Rev. B 14 2239-2249), the analysis is "a very peculiar problem, because it is one of the very few places in physics where the difference between rational numbers and irrational numbers makes itself felt." More specifically, a fundamental parameter in the problem is the ratio between two characteristic periods. One is the period of the motion of an electron in a potential with periodic spacing $a$. This period is proportional to $a^2$. The other is the orbital period of the "cyclotron" motion of electrons in a strong magnetic field of magnitude $B$; that one is proportional to $1/B$. When $B$ is extremely large (Hofstadter's estimate was 100,000 teslas for a typically scaled crystal) the two periods become comparable. Then the variation of $V_H$ with $V_x$ depends critically on whether the two periods are rationally related or not.

Hofstadter worked out the behavior completely, and explained how the graph of the energy spectrum "has some very unusual properties. The large gaps form a very striking pattern somewhat resembling a butterfly; perhaps equally striking are the delicacy and beauty of the fine-grained structure. These are due to a very intricate scheme, by which bands cluster themselves into groups, which themselves may cluster into larger groups, and so on." This pattern, which became known as the Hofstadter butterfly (it was discovered and published well before the concept "fractal" became commonplace), seemed destined to an only theoretical existence, because of the huge magnetic fields involved.

Nevertheless this spring three reports were published with experimental confirmation of features of the butterfly:

All three teams relied on building a new kind of material by depositing one or more layers of graphene (a compound formed of carbon atoms arrayed in a hexagonal lattice) on top of a crystal of boron nitride whose surface has the same tiling, only 1.8% larger. If the two lattice axes are perfectly aligned, a "moiré superlattice" is formed which has some of the physical properties of a 2-dimensional crystal, but with cells about 50 times larger than those in graphene. If the axes have a slight angular offset, the cell size gets smaller, but is still large enough to make an experiment possible with currently available magnets. 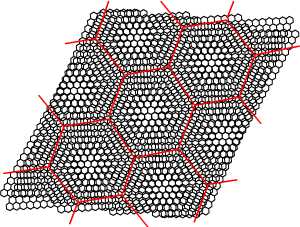 Superimposing two hexagonal lattices with slightly different sizes creates a moiré pattern that is again a hexagonal lattice; here for legibility the two are shown with an angular offset of $5^{\circ}$.

Here are sample figures from the articles. 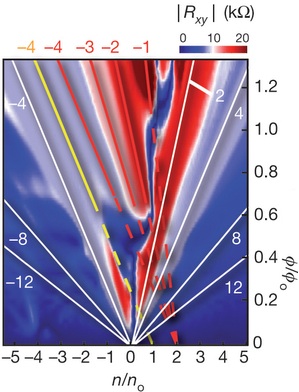 From Kim et al. Height is proportional to the magnetic field $B$, which varies from 0 to 30T; color indicates absolute value of Hall resistivity (proportional to Hall voltage). Traces of the Hofstadter Butterfly appear as "anomalous quantum Hall states" (yellow and red lines, starting around $B = 15$T). Image used courtesy of P. Kim. 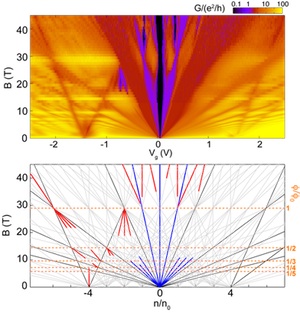 From Hunt et al.. Height is proportional to the magnetic field $B$ which with their magnet could reach 45T. The lower diagram compares the experimental results with Gregory Wannier's 1978 predictions that the energy gaps in the Hofstadter spectrum would lie along linear trajectories with rational slope. Larger image. Images courtesy of Ben Hunt.

The differential geometry of the Endoplasmic Reticulum

John Farrell, who covers science and technology for the Forbes website, posted "Scientists Explore The Pure Geometry Inside Our Cells" on July 24, 2013. He was picking up a research article in the then current Cell, with the title: Stacked Endoplasmic Reticulum Sheets Are Connected by Helicoidal Membrane Motifs. The authors are Mark Terasaki (UConn), Tom A. Rapoport (HHMI, Harvard) and 10 collaborators. The endoplasmic reticulum (ER) is a structure of hollow sheets and tubules inside cells that serves as a locus for synthesis and modification of cellular materials, as well as a highway network for transporting them throughout the cell. The article treats the stacked configuration of the ER, which has been known for about 60 years, and occurs in "cells that secrete most of their synthesized proteins ..., such as pancreatic and salivary gland cells." Mathematically the most striking finding is the one Farrell alludes to: the sheets in the stacks are layers of a local helicoidal structure. As the authors put it: "The overall structure resembles a parking garage."

A stack of parallel slices from a small region of a cell in the salivary gland of a mouse, made with a scanning electron microscope, and showing sheets of the ER. Slice dimensions: $800\times 950\times 40$nm (total volume surveyed here is about $\frac{1}{5}$ of a cubic micron). In these slices, the sheets of the ER appear in cross-section. The authors identify individual sheets, labeled $A,B,C,D,E$ here, and follow them through the sequence of slices. During the sequence, sheets separate and reattach: the analysis shows that the slices in this stack happened to be very nearly parallel with the axis of a local helicoidal structure, so that this combinatorial pattern is the same, overall, as the pattern of intersections of a mathematical helicoid with a moving plane parallel to its axis. (Compare with the schematic diagram on right, and with the MAPLE-generated helicoid in the next image). SEMicrographs courtesy of Mark Terasaki et al..

A plane parallel to the axis of a helicoid and sweeping left to right generates the same overall pattern of intersections as the parallel slices of the ER sample sectioned above.

Why helicoids? Now differential geometry comes into the picture. The authors' hypothesis is that "the observed sheet stack structure corresponds to a minimum of elastic energy of sheet edges and surfaces." An ER sheet is in fact hollow: it consists of two planar membranes connected by an edge membrane (this structure is visible in the SEmicrograph cross-sections above). They consider three contributions to the energy: bending at the edges, bending of surfaces and a component which results from spatial confinement. [Away from the edges the surface is rather flat, so one can expect the bending at the edges to be dominant in the calculation.] Considering a single connection between sheets, the authors note that "the energy of the edge line is minimal if the line curvature is constant and equal to the negative spontaneous curvature." 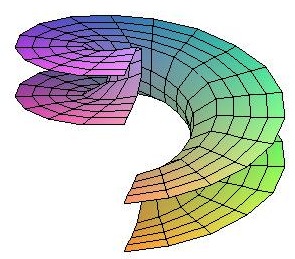 A double-layer sheet boundary has negative Gaussian curvature when the boundary is concave (curves away from the surface). The bending energy is minimized when the boundary follows a constant-pitch spiral, with pitch determined by the layer separation and other physical parameters.

Finally, the authors observe that that in a given volume of stacked ER there will be many connections. Since a right-handed helicoidal connection block can fit together smoothly with a left-handed one, the authors hypothesize connections with the two helicities fitting together checkerboard-style in a locally planar array. They remark that "the predicted one-to-one relationship between left- and right-handed helicoidal connections is in reasonable agreement with the 3D reconstructions of the experimental data."

In a "Preview" in the same issue, Wallace Marshall (UCSF) refers to D'Arcy Thompson. A century ago, he "proposed that physical principles such as surface tension could dictate biological form. But then the genome happened, and with it came the desire to explain away questions of cellular structure by telling ourselves that geometry is encoded in the genome." Marshall points to this paper as breathing "new life into the old dream of mathematical biology," and ends: "Maybe ER stack connectors are special cases in that simple math and physics won't explain all or even most cellular structure. The jury is still out. The fact that Terasaki et al. .... needed advanced microscopy methods to visualize their structure suggests that we might not see recognizable mathematical forms because we don't yet know how to look for them."