A fax from Archimedes

The "image of the week" of September 26, 2011 on the Scientific American's blog is photograph of a page from the Archimedes Palimpsest, where modern technology has made the original text legible. Blogmistress Bora Zivkovic quotes William Noel ("who spearheaded the effort to reveal the hidden text") as saying that watching the previously erased mathematics appear was "like receiving a fax from the 3rd Century B.C." As Zivkovic tells us, the book will be on display starting next month at the Walters Art Museum in Baltimore.

[Hear William Noel and Roger Easton talk about the restoration.]

"Pure mathematics - and that's the problem ..."

with theoretical physics, it's that physics is not mathematics." This is Amir Aczel, a science historian at Boston University, talking with Ira Flatow on NPR's Science Friday, August 28, 2011 (available online). Flatow focuses the discussion on the current status of the Higgs Boson, and on the news (back in August) that a large range of energies had been ruled out as possibile locations for the particle. He asks: "But what if it doesn't exist at all? ... is this particle really just a figment of our mathematical imagination?" Aczel replies as above; and goes on: "In math, you prove something, you have a theorem, and its truthfulness, its validity, is irrelevant. You know, it doesn't need the world. It's just a mathematical construction that is proven, while physicists try to look for different pieces of mathematics that will help them." He refers to Einstein ("he could take mathematics and make it fit into reality") and to Dirac's "fantastic prediction" of antimatter, but reminds us that "if the Higgs search fails, that means that the mathematics of the Higgs, which is certain mathematics of broken symmetries and group theory in mathematics, is not exactly right, and we have to search for other theories."

"When," Flatow asks, "did mathematics become so entwined with the physical world? It wasn't always like that, was it?" Aczel: "Galileo said the book of nature is written in the language of mathematics. And from my point of view, that started it all."

In an article in the June 21, 2011 Proceedings of the National Academy of Science, Arup Chakraborty (MIT) and 11 collaborators describe how they used random matrix theory to find vulnerabilities in the HIV genome. The goal was to identify "groups of sites in the viral proteome ... such that sites within a group co-evolve in a collectively interdependent manner to influence virus variability but each group evolves independent of other groups," with the idea of locating points that could be targeted by a vaccine, and where it was less likely that the virus could find an "escape pathway" through a viable mutation. To identify these groups of sites they adapted a technique from analysis of the stock market, where correlation matrices relating pairs of stocks were "cleaned" of noise due to finite sampling and overall fluctuations.

In this application the entries in the correlation matrix measure "the difference between the frequency of occurrence of a double mutant and that which would be observed if the mutations occurred independently." Each eigenvector of this matrix "represents a specific combination of sites, whose mutations occur in a coupled way but are essentially independent of mutations in a combination of sites represented by another eigenvector." The associated eigenvalue "reflects the contribution of this eigenvector to the correlations between sites." The cleaning was accomplished by comparing the eigenspectrum of this correlation matrix with that of a random matrix of the same size. This allowed the identification of eigenvectors where the correlation was significant. 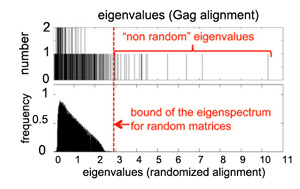 Gag refers to glycosaminoglycan-binding proteins, the sector of the HIV proteome under investigation. The upper graph displays "the number of eigenvalues (ordinate) of the correlation matrix ... with a given magnitude (abscissa); the lower one plots frequency vs. magnitude for eigenvalues obtained from 1000 randomly generalted matrices of the same size as the correlation matrix.

The team did in fact identify a sector which might be "particularly vulnerable to multiple points of immune pressure;" and they suggest "how this understanding can be harnessed to design new immunogens for a vaccine against HIV."