Numbers on the brain

"Topographic Representation of Numerosity in the Human Parietal Cortex" appeared in Science, September 6, 2013. The authors, Ben Harvey, Barrie Klein, Natalia Petridou and Serge Dumoulin (Utrecht University and University Medical Center), explore numerosity perception. This is the ability to perceive the cardinality of small sets of objects in roughly the same way one perceives color. It works with small numbers. "Animals, infants, and tribes with no numerical language perceive numerosity although they cannot count or use symbolic representations of number." They remark that "the primary sensory and motor cortices in the brain are organized topographically." [E.g., adjacent spots on the retina are represented by adjacent neurons in the visual cortex]. And they ask: "Is the neural organization for numerosity similarly topographic?" 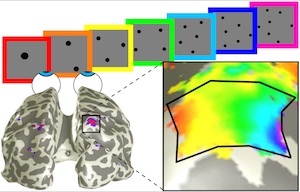 This image contains a summary of the Utrecht team's research. The black square on the brain marks "a region in the right parietal cortex where neural populations demonstrated numerosity tuning ..." It is enlarged on the right. The colors encode "numerosity preferences for data averaged from all stimulus conditions, showing preferred numerosity increasing from the medial to lateral ends of the region of interest." They match the colors on the framed sets of dots, which are samples of the stimuli shown (eyeballs) to subjects. Image courtesy of Ben Harvey & co-authors.

The answer is yes. "We elicited responses to visual patterns with varying numerosity in study participants, while acquiring high-field (7 teslas) fMRI data." They controlled carefully for possible confounding effects (total area of dots, etc.), and "developed a novel data-analysis method that extracts numerosity tuning from the time courses" (the records of responses of a single locus to a sequence of increasing and then decreasing cardinalities). "Projecting each recording site's preferred numerosity onto the unfolded cortical surface revealed an orderly topographic map. The topographic progression and its direction were consistent between participants and stimulus conditions."

In conclusion they remark that this work, and the conclusions that can be drawn from it, challenges "the established distinction between primary topographic representations and abstracted representations of higher cognitive functions."

"The Stone" is a blog in the Opinionator section of the online New York Times. On June 16, 2013 Alice Crary and Steve Wilson posted The Faulty Logic of the "Math Wars". They start fairly generally. "If we are to apply progressive ideals appropriately to a given discipline, we need to equip ourselves with a good understanding of what thinking in that discipline is like." And then they zoom in on the "raging debates about K-12 mathematics education that get referred to as the 'math wars' ..." . They explain the wars as mainly a conflict between a "reform" strategy that emphasizes numerical reasoning ("to use the new lingo") and "a more traditional focus on understanding and mastery of the most efficient mathematical algorithms."

For example, "The most efficient algorithm for addition ... involves stacking numbers to be added with their place values aligned, successively adding single digits beginning with the ones place column, and 'carrying' any extra place values leftward." The TERC program, "widely used and very representative," does not introduce this method to students until the 4th grade, and "even then they are not asked to regard it as a privileged method." They quote the reform rationale: "the point of math classes should be to get children to reason independently, and in their own styles, about numbers and numerical concepts." Mastering the standard algorithms is "a merely mechanical exercise that threatens individual growth." Of course the students get early training in the use of calculators, starting in Grade 2, in case they should actually need an answer.

Crary and Wilson invoke Wittgenstein to remind us that "far from being genuinely mechanical, such [algorithmic] calculations involve a distinctive kind of thought." And more importantly they are "the most elegant and powerful methods for specific operations. This means that they are our best representations of connections among mathematical concepts. Math instruction that does not teach both that these algorithms work and why they do is denying students insight into the very discipline it is supposed to be about."

Love and Math in the Wall Street Journal

It's Berkeley's Edward Frenkel (who else?), being interviewed by Alexandra Wolfe for a Weekend Confidential item in the August 23 2013 WSJ. Ms. Wolfe describes Frenkel and his "attempts to bridge the gap between his passion for math and the popular appetite for it." The strategy: "I want to put more love into math." More specifically, he talks about elementary math education: "It's like teaching an art class where they only tell you how to paint a fence but they never show you Picasso. People say 'I'm bad at math,' but what they're really saying is 'I was bad at painting the fence.'" On the other hand "People might think they hate math but everyone loves love." So let's put more love into math. How exactly this gets done is not explained, but later in Ms. Wolfe's account of the interview we read "Mr. Frenkel thinks that the only way a mathematical dialogue will begin is if it becomes part of everyday discussion and attracts the interest of those who never thought they were good at it."

The interview is wide-ranging. Frenkel describes his youth in Russia and his survival of academic anti-semitism (more detail on these points earlier in these columns); his arrival at Harvard as a 21-year-old visiting professor (Frenkel: "I bought myself the coolest jeans I could find, and I got myself a Walkman.") and his work in mathematics ("Mr. Frenkel spends most of his time working on the subject broadly known as the Langlands program, researching a grand unified theory of mathematics, linking various fields such as number theory, quantum physics and geometry."). He worries about schools abolishing core curricula and letting students choose the classes they think they like. At the end, only private schools will require hard topics like algebra: "The 1% is going to know mathematics." As for his movie ("The Rites of Love and Math") and his upcoming book ("Love and Math") being inscrutable in parts, Frenkel doesn't worry: "If they say, 'Tell me more,' I did my job well."

Mathematicians, the NSA and domestic spying

The science writer (and NYU professor) Charles Seife posted on Slate (August 22, 2013) An Open Letter to My Former NSA Colleagues, subtitled "Mathematicians, why are you not speaking out?" Seife was recruited out of Princeton in the early 90s, and describes the geeky glamour of the NSA at that time. "The close ties between Princeton and the NSA went back decades, I discovered, and some of the professors I had been learning from were part of a secret brotherhood of number jocks who worked on really tough math problems for the sake of national security. I was proud to join the fraternity..." and "Within a week of arriving at the NSA, I was presented with an amazing smorgasbord of the most alluring mathematics problems I had ever seen, any of which could possibly yield to a smart undergraduate. I hadn't seen anything like it--and I never will again." Another attraction was "an idealistic vision that we were doing something to help our country. ... And once I was on the inside, I saw plenty of ways that the agency was having an effect on national security. Even as a rookie, I felt I had a chance to make a difference in some small way. Some of the veteran mathematicians whom we met had clearly had a palpable effect on the security of the United States, legends almost completely unknown outside of our own club. "

At that time, it was understood that "we were empowered to protect our nation against only foreign enemies, not domestic ones. To do otherwise was against the NSA charter. More importantly, I got the strong sense that it was against the culture of the place." And now? "We know that the agency has extensive capabilities to snoop on U.S. citizens and regularly does so accidentally. And we have credible allegations that the agency sometimes uses that information quite on purpose. If the agency's tools truly are used only against the enemy, it seems that ordinary citizens are now being counted among them."

Seife explains that he worked for the NSA only briefly, but still feels "horrified." He calls on "my former colleagues, my friends, my professors, and my mentors" who "have spent much of your working lives helping the NSA build its power, only to see your years of work used in a way it was never supposed to be used," to speak out. He does not sound very optimistic that this will happen.