The abc conjecture in Nature

There doesn't seem to be any connection between the prime factors of two integers and those of their sum. After all, $3+ 17 = 4\cdot 5$. But in fact there is a subtle link. That's the point of the "$abc$ conjecture," and the subject of an unusually prominent look at mathematics in Nature. "The biggest mystery in mathematics: Shinichi Mochizuki and the impenetrable proof," by Davide Castelvecchi (October 7, 2015) ran with the subhead: "A Japanese mathematician claims to have solved one of the most important problems in his field. The trouble is, hardly anyone can work out whether he's right." The conjecture stems from the observation that if three relatively prime integers are related by $a+b=c$, then $c$ is usually smaller than the prime content ${\rm rad}(abc)$, the product of all the distinct primes occurring in the three factors. For example in $3+ 17 = 4\cdot 5$, ${\rm rad}(abc)= 3\cdot 17\cdot 2\cdot 5 = 510$, certainly larger than $20$. But this is not always the case. For example, (from Wikipedia), $3+125=128$. Here ${\rm rad}(abc)=3\cdot 5\cdot 2 = 30 < 128$. There are in fact infinitely many such triples. The $abc$ conjecture quantifies how "bad" they can be:

Castelvecchi explains how, after the conjecture was formulated (1985-1988) by Joseph Oesterlé and David Masser, it was soon recognized to "have profound implications for the study of equations concerning whole numbers - also known as Diophantine equations ... ." Noam Elkies "found that a proof of the $abc$ conjecture would solve a huge collection of famous and unsolved Diophantine equations in one stroke." So the appearance of Mochizuki's proof, in 2012, was a big event. The article does not go into mathematical details of the proof, and for good reason: as stated in the subtitle, even after three years almost nobody in the profession understands it. And worse: "... the few who have understood the work have struggled to explain it to anyone else. 'Everybody who I'm aware of who's come close to this stuff is quite reasonable, but afterwards they become incapable of communicating it,' says one mathematician who did not want his name to be mentioned. The situation, he says, reminds him of the Monty Python skit about a writer who jots down the world's funniest joke. Anyone who reads it dies from laughing and can never relate it to anyone else." 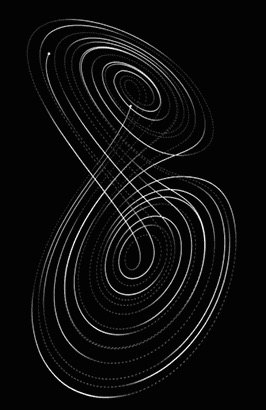 "A Twisted Path to Equation-Free Prediction," by Gabriel Popkin, appears in the October 13, 2015 Quanta. The subhead: "Complex natural systems defy standard mathematical analysis, so one ecologist is throwing out the equations." Quanta runs a lovely animated GIF of the Lorenz attractor, but Popkin's story is that in general, the chaotic dynamical systems occurring in nature are too complex to be usefully modeled by equations. An equation implies that some relation between present and future, which can be expected to persist, has been explicitly understood. But even when this understanding is lacking, the data themselves can do the job. Popkin gives the example of George Sugihara (Scripps), an ecologist whose team analyzed flutuations in the salmon population off British Columbia by developing "an approach based on chaos theory that they call 'empirical dynamic modeling,' which makes no assumptions about salmon biology and uses only raw data as input." Sugihara: "It's allowing the data to say what the relationships are." The work is reported in a PNAS article published in March, 2015.

As Popkin tells us, the underlying theory goes back to the Dutch mathematician Floris Takens, whose Embedding theorem (1981) showed how "the full state of a chaotic system can, in theory at least, be embedded in a time series of a single variable." One concentrates on that variable. "The essence of the method involves identifying points in a system's attractor graph that are close to the point representing the system's present state. For one or two time steps, one can then predict that the system will evolve similarly to how it did in the past. ... Takens' theorem works best when there are enough data points to make a dense attractor, making it easier to find times when a system's present state is close to a past one."

Popkin spoke with Don DeAngelis, an ecologist with the U.S. Geological Survey in Miami, who called Sugihara's work "a huge theoretical breakthrough," and who wrote, with Simeon Yurek, in a commentary in the same issue of PNAS,"This approach also suggests that, with high-performance computation, the study of dynamic systems is moving away from formulation and parameterization of equations and toward letting data directly determine the model. Because of the central role equations hold in science, it also raises questions: How will these changes affect the way scientists communicate, the way they understand, and the way they think?"

Last month, we learned how parents can transmit their math anxiety to their children by "helping" with homework. Now comes more positive news, in the form of "Math at home adds up to achievement in school," a research report in Science (October 9, 2015) that describes how having children engage in math story time with their parents can bring about significant improvement in the children's mathematical progress, even when it happens as seldom as once a week and especially when the parents have math anxiety themselves. As the authors, Talia Berkowitz, Marjorie Schaeffer and five collaborators (Psychology, Chicago), state in their abstract, "Brief, high-quality parent-child interactions about math at home help break the intergenerational cycle of low math achievement."

The study was large (587 families with first-graders, from 22 Chicago-area schools) and meticulously organized. Basically there were two groups, a "math" group and a "reading" group that served as a control. "Children and their parents were asked to read topical math (or reading) passages and answer corresponding math (or reading) questions, delivered by an iPad app called Bedtime Learning Together (BLT), several times per week over the course of the school year. ... Participating families were given an iPad Mini to access the story problems." The experimenters were able to track how often parents used the app with their children, and investigate the relation between that frequency and the children's mathematical progress during the year, comparing the results with those from the reading group. They were also able to test the parents' math anxiety levels before the start of the experiment, and analyze the high and low-level-anxiety groups separately. Among the reported results:

The Bedtime Math app can be downloaded free. Instructions are here.

The "maths whizz" is Terence Tao, the master is Paul Erdős, the story is told by Chris Cesare in Nature, October 1, 2015. The riddle is the Erdős discrepancy problem, posed by the master in the 1930s. "Like many puzzles in number theory, the Erdős discrepancy problem is simple to state but devilishly difficult to prove. Erdős ... speculated that any infinite string of the numbers 1 and $-1$ could add up to an arbitrarily large (positive or negative) value by counting only the numbers at a fixed interval for a finite number of steps." 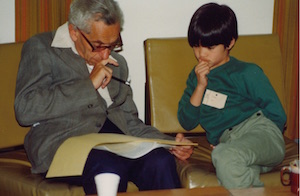 Cesare sketches out the recent history of the problem, including the involvement of Tim Gowers and Polymath where the contrapositive (and to my mind more intelligible) version of the problem can be found: "Is it possible to find a $\pm 1$-valued sequence $x_1,x_2,\dots$ and a constant $C$ such that $|x_d+x_{2d}+\cdots+x_{nd}| \leq C$ for every $n$ and every $d$?" (For a nice presentation of this take on the problem, as well as an idea of how intractable it seemed only 18 months ago, I recommend James Grime's YouTube clip). "The [Polymath] effort fizzled out in 2012, but participants did manage to show that proving the conjecture for a certain family of sequences was good enough to prove it in general." Tao, who was part of the project, had been working on another problem early this September when "a timely comment on his blog suggested that the problem might be related to the Erdős conjecture." Tao "quickly realized that combining the commenter's fresh insight with previous results could lead to a solution. He submitted his paper less than two weeks later" with an acknowledgement thanking the commenter. A more mathematically detailed account of Tao's achievement, "A Magical Answer to an 80-Year-Old Puzzle" by Erica Klarreich, appeared in Quanta, October 1, 2015.