The prize was awarded, on October 4, 2016, to David J. Thouless (University of Washington, Seattle), F. Duncan M. Haldane (Princeton) and J. Michael Kosterlitz (Brown); the citation, from the Royal Swedish Academy of Sciences, includes the statement: "The three Laureates' use of topological concepts in physics was decisive for their discoveries. Topology is a branch of mathematics that describes properties that only change step-wise. Using topology as a tool, they were able to astound the experts."

The spokesman for the Academy did his best to say a bit more about what topology is. 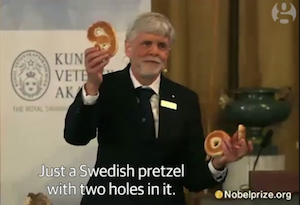 Thors Hans Hansson, speaking for the Nobel physics committee: "I brought my lunch. And here you see, it's a cinnamon bun. Here I have another thing, I have a bagel. And here I have a pretzel, just a Swedish pretzel with two holes in it. Now for us, these things are very different. This is sweet, this is perhaps salty, different shapes, etc. But if you are a topologist, there's only one thing that's really interesting with these things, in which they differ: this thing [the bun] has no hole, the bagel has one hole, the pretzel has two holes. The number of holes is what a topologist would call a 'topological invariant'." Image from a video on The Guardian website, used courtesy of Guardian News & Media Ltd.

Accounts in the press tried, with more or less success, to say whether the genus of pastry was an analogy to something going on in the physics or whether there was an actual number of "holes" being counted.

On October 14, 2016 Slate ran a piece by Katharine Merow suggesting that the Pi-day commemoration (traditionally 03/14) could usefully be replaced by Hamilton Day (10/16), celebrating the moment in 1843 when William Rowan Hamilton, while walking along the Royal Canal in Dublin, realized that he could make vectors into a coherent multiplicative system by adding a fourth dimension: it was the birth of quaternions. " 'An electric current seemed to close,' he later wrote, 'and a spark flashed forth.' Hamilton realized that if he admitted a fourth dimension $-$if he exchanged number triples for number quadruples of the form $a+bi+cj+dk$ and defined multiplication in a particular way$-$ then all would work out as he wished. Hamilton would go on to spend years and write volumes exploring the effects and import of his four-dimensional answer to the three-space puzzle, but he knew on Oct. 16 that he had found the key. Flush with his insight, Hamilton could not resist the impulse to record it. Then and there, he took a knife to the Broome Bridge, carving into its stone his multiplication formula: $i^2 = j^2 = k^2 = ijk = -1.$" 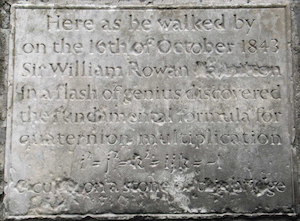 The plaque on the Broome Bridge marking the locus of Hamilton's eureka moment. The plaque had been vandalized when this photo was made (2007) but has since been restored. Image from Wikipedia, licensed for reuse under the Creative Commons Attribution-ShareAlike 2.0 license.

Merow reminds us of the importance of quaternions: "Eclipsed for much of the 20th century by such tools as vector analysis and matrix algebra, quaternions have more recently enjoyed a renaissance. Today's programmers and engineers harness their ability to describe three-dimensional rotations to simplify aerospace navigation, enhance the realism of flight simulators and video games, and power eye-tracking and face-recognition technologies. We have quaternions to thank for Tomb Raider's Lara Croft, for the eye-popping special effects in The Matrix Reloaded, and for Curiosity's 2012 landing on Mars."

An ultratorus in every cell 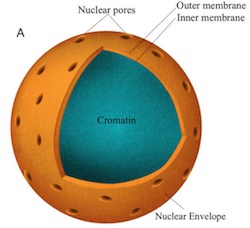 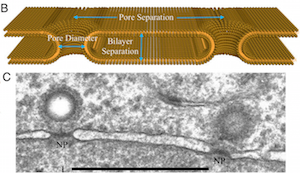 "Nuclear envelope and the topology. (A) Nuclear envelope with two concentric membrane spheres fused at thousands of sites with toroid-shaped pores. (B) Key geometric parameters that define the nuclear envelope architecture. These include the pore diameter, bilayer separation, and the pore separation. The forces and mechanisms that regulate this unique geometry are not yet understood. (C) Experimental image showing a section of the nuclear envelope with nuclear pores labeled as NP lying in the same observed plane. Other NPs might be out of the plane of observation. [Scale bar, 500 nm.] The image shows the uniform bilayer separation and the typical pore separation" Typically the pore diameter is 42.5 nm in mammalian cells, the two layers are 30-50 nm apart and the pores are 250-300 nm from each other. 1 nm = $10^{-9}$m. Image from PNAS 113 11094, used with permission.

The authors "used the theory of elasticity and differential geometry to analyze the equilibrium shape and stability of this structure. Our results show that modest in and out-of-plane stresses present in the membranes not only can define the pore geometry, but also provide a mechanism for destabilizing membranes beyond a critical size and set the stage for the formation of new pores."

In particular, they study a local, circularly symmetric model (a surface of revolution) for a single pore with diameter 42.5 nm joining two sheets. They set up an energy functional involving the Gaussian and normal curvatures of the surface, as well as terms representing the internal tension force in the membrane and the ambient pressure. They report that within a biologically plausible range of the two parameters buckling occurs (the sheets collapse together) at a radius between 250 and 500 nm. Since it is known that pore formation starts at a point of layer tangency, this would explain the observed pattern of pore separation. "Because our model predicts a stable structure over a wide range of tensile stresses, nuclei may be able to easily adjust to the changes in nuclear stresses in a biological setting and yet acquire and maintain their geometry."