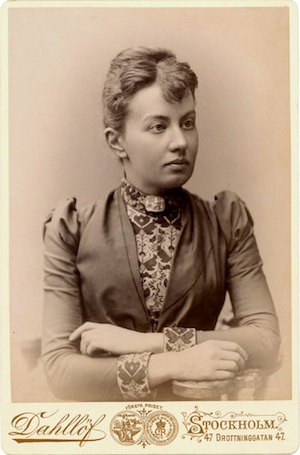 This elegant portrait of the great Russian mathematician was printed in the Times for November 12, 2013. The occasion was their review of an exhibition ("Extraordinary Women in Science and Medicine"), then up at the Grolier Club in New York. Denise Grady, who wrote the review, gives us a thumbnail biography: Kowalevski, "born in Russia in 1850, became a noted mathematician in spite of a father who 'had a horror of learned women,' according to the catalog. As a young woman, she could study math and physics only in secret. She married a man she did not love just to get away from her father and obtain a formal education. The marriage turned out to be a disaster. And when the couple moved to Berlin, she had trouble finding a university that would allow a woman to earn a degree. But a renowned mathematician agreed to provide tutorials, and she eventually received a doctorate and went on to fame in her field." Other extraordinary women featured in the show include the geneticist Barbara McClintock, the astrophysicist Cecilia Payne-Gaposhkin and the crystallographer Dorothy Hodgkin. Photograph: Institut Mittag-Leffler, reproduced with permission.

How much math do we really need?

The Daily Dish (October 23, 2013) links to "The Death of math," posted October 19 by Gary Rubinstein on his blog at teachforus.org (where we learn that "Teach For Us is the organization that connects Teach For America teachers with each other for support and shares their stories with the broader public."). Rubinstein, a Teach for America veteran, is on the math faculty at Stuyvesant High School in New York. As the Dish reports, Rubenstein would "gleefully chop at least 40 percent of the [math] topics that are currently taught from K to 12," and recommends making all math instruction optional after 8th grade.

This posting generated much comment, some of it enlightened, both on the Dish and in the responses on Rubinstein's blog. Rubinstein surveys recent treatments of this problem in the media; two of them were picked up here (in 09/12 and 03/13).

Mathematicians in Science: Bourguignon and Gauss

On November 1, 2013, Science reported that Jean-Pierre Bourguignon has been named the new president of the European Research Council, "Europe's funding agency for basic research." Martin Eskerink, who wrote the report, refers to A Beautiful Formula, the 8-minute video Bourguignon made last year about $e^{i\pi}+1=0$, and where he gives an example of a "change in point of view [that] turns out to be an extremely powerful tool in mathematics." Eskerink remarks that Bourguignon's own point of view "is about to shift dramatically, giving him greater control over the course of European science." Eskerink emphasizes the diplomatic problems that Bourguignon will confront in his new position; he mentions the pressure from "countries in southern and eastern Europe that want a bigger part of ERC's pie" (€7.5 billion for 2007-2013, and scheduled to almost double for the next six years); and the difficulty in keeping the ERC independent of politics and European Commission. A fuller account of Bourguignon's mathematical career was given (by David Larousserie in Le Monde on Sept. 2, 2013) after his retirement, this year, from the directorship of the IHÉS and from his position as professor at the École Polytechnique.

On November 8, 2013, Science, in a "Random Sample," reported that the jar labeled "C. F. Gauss" in the University of Göttingen's elite brain collection did not in fact contain the brain of the "Prince of Mathematics," and had not for many, many years. The brain in that jar had a rare anatomical feature, a surface "bridge" between the parietal and frontal lobes, which had been first identified by the anatomist Rudolph Wagner in the brain of C. H. Fuchs, a famous physician who died the same year as Gauss, and who also made it into the "elite" collection. Somehow the two brains got swapped back in the 19th century; the substitution was noticed just this year by Renate Schweizer of the Max-Planck Institute in Göttingen: Wagner's original, precise drawings of both brains were still available and allowed the switch to be rectified. 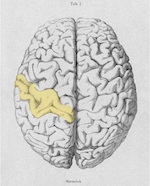 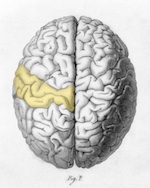 Rudolph Wagner's lithographs of the brains of C. H. Fuchs (left) and C. F. Gauss (right), made shortly after their deaths. The surroundings of the central fissure, separating the parietal and frontal lobes, have been highlighted in yellow. Note that in Fuchs' brain a bridge crosses the fissure. According to Science, Schweizer noticed that the brain in Gauss' jar had this unusual configuration, remembered having seen a picture of such a brain before, and realized this was in fact Fuchs' brain. Sure enough, in Fuchs' jar, was a brain that matched Wagner's lithograph for Gauss. Images © Jens Frahm and Sabine Hofer / Biomedizinische NMR Forschungs GmbH 2013.