Now that Fermat's Last Theorem and the Poincaré Conjecture have been disposed of, the Riemann Hypothesis stands pre-eminent among unresolved questions from the mathematical past. So it was exciting to read "Nigerian professor claims to have solved 156 year old maths problem" in the Daily Telegraph (Mark Molloy, November 17, 2015).

"Dr Opeyemi Enoch, from the Federal University in the ancient city of Oye Ekiti, believes he has solved one of the seven millennium problems in mathematics. The professor says he was able to find a solution to the Riemann Hypothesis first proposed by German mathematician Bernhard Riemann in 1859, which could earn him a $1m prize, in an interview with the BBC. However [his] solution to the problem has not yet been revealed."

Molloy's story goes back to a November 15 posting on the Vanguard news site: "Nigerian Scholar solves 156-Year-old problem in Maths" (by Rotimi Ojomoyela, datelined Ado-Ekiti). "The 156 years old Riemann Hypothesis, the most important problem in Mathematics has been successfully solved by Nigeria Scholar, Dr Opeyemi Enoch. With this breakthrough, Dr Enoch, who teaches at the Federal University, Oye Ekiti, ... has become the fourth egghead to resolve one of the seven Millennium Problems in Mathematics."

The story was almost immediately debunked locally: a post on the Nairaland Forum dated November 16: "Opeyemi Enoch Has NOT Solved The Riemann Hypothesis: Didnt Get Any $1M." The contributor checked Enoch's preprint. "If, indeed, this is Opeyemi Enoch that uploaded this paper, then he is guilty of very sloppy, very blatant plagiarism. To start with, the paper doesn't even have his name on it! It has the name of Werner Raab, who (I checked) published a paper online in 2013 that is almost line for line identical to the one on Academia.edu. I will admit that I didn't bother going through his paper (there are enough wrong proofs of RH on the Internet to drown in), but a quick overlook of the methods used (along with the fact that no one has heard of this paper in two years) suggests that there is a 0% chance that it could possibly be right."

But the zombie marched on. Next in This Is Africa (November 17) with the headline: "Nigerian academic solves 150 year-old math problem," the sub-head: "A Nigerian professor has reportedly solved a maths problem that has confounded mathematicians for over 150 years, scooping himself US$1 million in the process," and a thoughtful link to The Riemann Hypothesis For Dummies. And that "interview with the BBC" Molloy refers to. It's a "Newsday" podcast (dated November 17) with a question mark in the original written title: "Has a maths problem, which has gone more than 150 years without a solution, finally been solved by Nigerian academic Dr. Opeyemi Enoch?" No such discretion on the part of the BBC interviewer, e.g. "What are you going to do with your million dollars?" If you visit the site now, you will read: "(... The text and headline of this post have been amended from an earlier version, to make clear that the prize has not been awarded and his claims have not been verified.)" For a full post-mortem see the Aperiodic site, November 17 (Part 2, November 19), by Katie Steckles and Christian Lawson-Perfect, and George Dvorsky on Gizmondo: "Sorry, the Riemann Hypothesis Has Almost Certainly Not Been Solved."

Geometry in the rodent hippocampus

"Clique topology reveals intrinsic geometric structure in neural correlations," by Chad Giusti, Eva Pastalkovac, Carina Curtob, and Vladimir Itskov, was published in PNAS, November 3, 2015. The work (online early) was picked up in a Press Trust of India wire feed reprinted in The Financial Express on October 21: "A newly-developed mathematical method can detect geometric structure in neural activity in the brain, scientists say." The PTI feed quotes Itskov (Mathematics Department, Penn State): "Previously, in order to understand this structure, scientists needed to relate neural activity to some specific external stimulus. Our method is the first to be able to reveal this structure without our knowing an external stimulus ahead of time."

Itskov and his team recorded spike trains from about 80 neurons in "the rodent hippocampus" during various behavioral conditions, and wrote the correlation of the output of neuron $i$ and neuron $j$ as the $(i,j)$ entry in a matrix $C$. Ranking these correlations by their strength orders the set of pairs of indices: $(i,j)\prec (k,l)$ if $C_{ij} > C_{kl}$, defining what the authors call the order complex of $C$.

"To our surprise, we found that the ordering of matrix entries encodes geometric features, such as dimension." 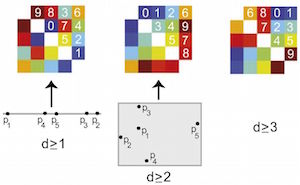 Three sample $5\times 5$ symmetric matrices, with an ordering of their off-diagonal entries: lowest order means highest correlation. Interpreting correlation as closeness, the second matrix is incompatible with a 1-dimensional distribution of points (this can easily be checked) and the third is incompatible with a 1- or 2-dimensional distribution (the authors thank the Penn State topologists Dmitri Burago and Anton Petrunin for a "simple proof" of this fact, given in the supplementary material). All four images with this item from Proceedings of the National Academy of Sciences, 112, 13455-13460.

For larger matrices, like the ones in these experiments, "the precise dimension may be difficult to discern in the presence of noise." But a closer analysis of the order complex allows the authors to distinguish between correlation matrices that have an underlying geometrical organization and those that come from random interconnections (as for example "the connectivity pattern observed in the fly olfactory system"). Their method uses persistent homology to analyze the order complex by representing it as "a nested sequence of graphs, where each subsequent graph includes an additional edge $(ij)$ corresponding to the next-largest matrix entry $C_{ij}$." In this complex the authors study the topology of the cliques, the all-to-all connected subgraphs, as more and more edges are added in. 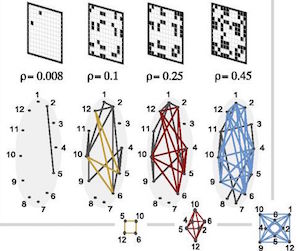 "The order complex of [a $12\times 12$ correlation matrix] $A$ is represented as a sequence of binary adjacency matrices, indexed by the density $\rho$ of nonzero entries. (Bottom) Graphs corresponding to the adjacency matrices." The edges in the graphs for each $\rho$ join $i$ and $j$ if $A_{ij}$ appears in the corresponding matrix, i.e. if $A_{ij}\geq$ the cut-off producing that density. "Minimal examples of a 1-cycle (yellow square), a 2-cycle (red octahedron), and a 3-cycle (blue orthoplex) appear at $\rho$ = 0.1, 0.25, and 0.45, respectively." 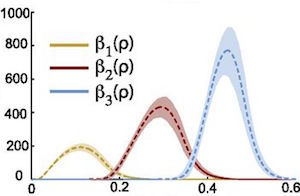 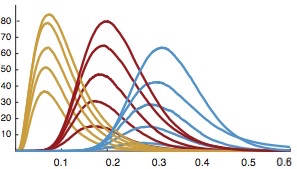 Back to the hippocampus. "Can clique topology be used to detect geometric organization from pairwise correlations in noisy neural data? To answer this question, we examined correlations of hippocampal place cells in rodents during spatial navigation in a 2D open field environment. ... As expected, the Betti curves from place cell data were in close agreement to those of geometric matrices." The authors repeated the experiment with animals in non-2D settings (wheel running, or REM sleep) and found "the Betti curves were again highly nonrandom, and consistent with geometric organization." "These findings suggest that geometric organization ... is a property of the underlying hippocampal network, and not merely a byproduct of spatially structured inputs."