On the heels of SOPA, PIPA, and the lesser known Research Works Act, many high-profile blogging mathematicians including Tim Gowers, Terence Tao, and John Baez have decided to protest the publishing practices of Elsevier. During the course of just a few weeks, about 2500 scientists and mathematicians have signed a petition at the website thecostofknowledge.com/ declaring their unwillingness to publish, referee, or do editorial work for the publisher. In 2006, the editorial board of Topology quit because of their disapproval of Elsevier's high prices and practice of bundling subscriptions to their journals. Elsevier recently supported the Research Works Act, which prohibits open-access mandates from being applied to scientific research that was conducted using federal funding. While the print media does not yet seem to be taking much notice, a recent article in Forbes references Gower's blog and comments that the protest is likely to spread beyond mathematics and the hard sciences. Another article in The Chronicle of Higher Education also references Gowers and discusses Elsevier's response to the allegations from concerned researchers. Discussion has already begun on the Secret Blogging Seminar and other blogs about replacements and alternatives to Elsevier's journals.

"Apologies to anyone who clicked on this story expecting to read about Christie Turlington or the latest Heidi Klum-Seal split news," this article begins. "But this is about Wall Street's sexiest models---we're talking about math." The article is a question-and-answer interview with mathematics writer George Szpiro, whose latest book is Pricing the Future, a history of the Black-Scholes equation that today dominates finance. The interviewer does not ask Szpiro much about the history of this equation or its impact. Most of her questions are actually assertions about how Black-Scholes has caused problems in modern finance, and the aim is to get Szpiro to react to these assertions. For example, the interviewer asks, "How has Black-Scholes failed, or gone awry?" Szpiro explains that the equation has not failed and is in fact correct but, for example, people sometimes use poor estimates of the equation's parameters, and in such cases the equation do not produce reliable information. "That sounds like a major failing to me," the interviewer retorts. "If you have a model that assumes data is correct, and it's not, that's a recipe for disaster. To me that's an argument to rely less on math, more on common sense. Wouldn't you agree?" Szpiro replies that the model did not fail, and of course one needs common sense, but if one puts incorrect data into a model, then the result will be rubbish. On the whole, the interview does not provide much insight into the Black-Scholes equation or what Szpiro's book is like. Szpiro nevertheless maintains his sense of humor.

Asked if Black-Scholes is Wall Street's sexiest model, he replies that it is indeed very appealing. "I think the Bell Curve is also quite shapely... especially if it does not have fat tails."

These three articles were inspired by a study that appeared in the January 2012 issue of the AMS Notices. The study, "Debunking Myths about Gender and Mathematics Performance", by Jonathan Kane and Janet Mertz, examined data from 86 countries and found evidence that social factors, rather than biological ones, account for difference in boys' and girls' performance in mathematics. In particular, they found that in countries with a high level of gender equity, both boys and girls do well in mathematics. The above-cited New York Times article appeared in the chess column. After a brief description of the Notices article, McClain notes: "There are many similarities between chess and mathematics as disciplines, so the findings shed light on why women chess players are not as successful as men.'' He then segues into a discussion of a chess game in a recent tournament in which a woman chess competitor displayed a particularly aggressive and incisive style.

The Los Angeles Times article is an opinion column written by two academics: Barnett is a senior scientist at the Brandeis Women's Studies Research Center, and Rivers is a Boston University journalism professor. The pair wrote the book The Truth About Girls and Boys: Challenging Toxic Stereotypes About Our Children. "[I]t's time to call a halt to the endless search for a male math gene, to the cry for more and more studies because someday we're going to find proof of men's innate superiority, and to the ongoing spate of articles saying that we really know that nature makes boys better," Barnett and Rivers write. "It's time to move from bickering over data to building new evidence-based public policies that will empower all of our children---and, in turn, society." A previous Math Digest item reported on the worldwide media coverage that ensued shortly after the publication of the Kane-Mertz article.

Much of modern technology depends on efficient transmission, reception, and storage of signals; an example is the way a smart phone efficiently compresses and stores audio and video files. Signal processing is an area of research that draws on tools from engineering and mathematics to create algorithms for the efficient handling of all kinds of signals: sounds, images, sensor data, experimental observations, etc. This brief article discusses an advance in which the combination of two different signal processing algorithms resulted in a new technique that can process certain signals 10,000 times faster than other methods.

The math formula used to select Oscar finalists is getting a makeover for the first time since 1936. The new formula which gives greater weight to the top vote on every ballot has Oscar enthusiasts scrambling to figure out how the change will affect which stars get invited to walk the red carpet. Many find the new system perplexing. Steven Brams, a political scientist at New York University, calls it "totally ad hoc," and adds, "If they want to engage in trial by error every year, I cannot stop them." However there are academics that defend the new. "While the system could be better, it does a moderately good job of being fair and selecting good films," says Nicolaus Tideman, an economist at Virginia Tech. Donald G. Saari, a mathematician at the University of California, Irvine, sees difficulties likely to arise. "Can the Academy find ways to get around these difficulties?" says Prof. Saari. "Of course. Many such methods exist." One thing both award analysts and mathematicians agree on is that movies with passionate support from a relatively small group of people will benefit from the change, while pictures appealing to a wider audience are set to lose out.

A math formula can apply to large things and small. The Economist reports on how a single formula can explain the pattern of tree patches in arid climates and at the same time the arrangement of stripes and spots on feline coats. Mathematician Bonni Kealy of Washington State University gave a talk on the discovery at the January meeting of the AMS and MAA in Boston. For those curious about how non-linear partial differential equations can produce such universal patterns, the research paper "A Nonlinear Stability Analysis of Vegetative Turing Pattern Formation for an Interaction–Diffusion Plant-Surface Water Model System in an Arid Flat Environment' is available online. 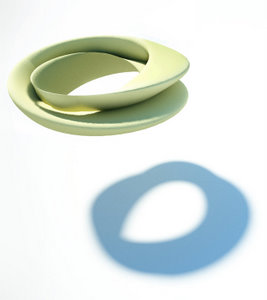 This short but tasty article recounts a boil of recent mathematical activity around pasta shapes. The shapes have been plotted in Mathematica and blogged by fluid dynamics graduate student Sander Huisman. They've appeared on a pop quiz in Christopher Tiee's vector calculus class. And, most impressively, they're the stars of a new 208 page book by architects Marco Guarnieri and George L. Legendre. (No relation to the eponymous transform's inventor, it seems.) The book classifies 92 types of pasta into an edible cladogram, providing equations and plots of representative surfaces for each one. The noodles surveyed include a new shape--a twisted Möbius strip named after Legendre's baby daughter Ioli--which remains theoretical due to difficulties gluing the edges together. (It appears Klein bottle pasta is still in search of a namesake--not to mention a manufacturer.) Legendre says this labor of love is an "amalgamation of mathematics and cooking tips--the profane, the sacred"--although it's not clear which he considers to be which. The article has links to the blog and the pop quiz, and a selection of figures from the book. See a diagram related to the pasta geometry. Diagram and image: George L. Legendre, IJP Corporation. 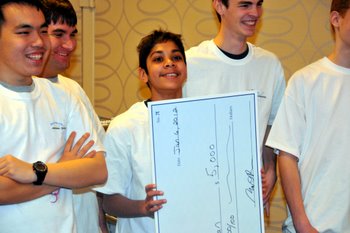 Thirteen-year-old Shyam Narayanan (at left, holding the check) was the big winner in the 2012 national Who Wants to Be a Mathematician, which took place January 6 at the Joint Mathematics Meetings in Boston. Shyam's winnings are split 50-50 with the math department at his school, Blue Valley West High School (Overland Park, KS). Robertson writes that in addition to being great in math, Shyam is also a competitive swimmer and loves to play the piano. His principal, Tony Lake, first knew that Shyam was sharp when Lake was asked to bring an honors high school geometry book to Shyam--who at the time was in elementary school. Shyam hopes the school will use the money to begin a math club. See Shyam talk about his win.

Nine other students competed in the contest and about half were covered by their local media:

Read and hear more about all 10 contestants in the 2012 national Who Wants to Be a Mathematician (Photo by E. David Luria).

"A Unique Expression Of Love For Math," by Ari Daniel Shapiro. NPR's All Things Considered, 10 January 2012. 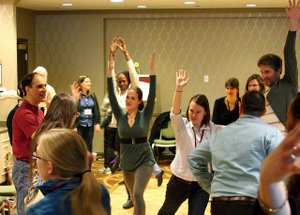 Participants at the Joint Mathematical Meetings, held in Boston in early January, spent some time thinking outside the box—the typical mathematical powerpoint presentation/numbers on a chalkboard box—with sessions and discussions on the mathematics of crochet, origami, and dancing. Host Ari Shapiro talks to Sarah-Marie Belcastro, a mathematician who crochets objects like Möbius bands to help visualize complicated mathematical structures. He listens to Thomas Hull, a paper-folding enthusiast who explains that "origami is calculus," and watches a group of mathematicians defeat a computer at backgammon using probability. He interviews a mathematician who leads participants in a full-body warm-up before delving into math-based "movement phrases." As Williams College math professor Colin Adams explains, pursing alternative approaches to mathematics helps teachers maintain student interest long enough to demonstrate the beauty of the subject. (Photo: Laura McHugh, MAA Editorial/Social Media.)

McGuire truncated the problem with an algorithm that identified "unavoidable sets"—interchangeable numbers within a puzzle solution—based on the idea that one member of each unavoidable set must be given as a clue in order to eliminate interchangeability. McGuire’s simplified approach still required such significant computing time that other mathematicians will not be able to verify his work quickly, but participants at a recent conference indicated the proof is probably valid. 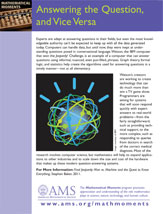 Jeopardy! Grand champions Ken Jennings and Brad Rutter did not stand a chance against IBM supercomputer Watson when the two mere humans went up against the computer in February, but is it good or bad news for us humans? In a piece for Discover magazine, Leeaundra Keany argues that even as computers get ever more powerful and their number crunching algorithms more sophisticated, humans still possess complicated skills that computers are far from acquiring. Computers might be able to detect humor or wordplay in a sentence, but they still don´t get the joke.