See also: The AMS Blog on Math Blogs: Two mathematicians tour the mathematical blogosphere. Editors Brie Finegold and Evelyn Lamb, both PhD mathematicians, blog on blogs that have posts related to mathematics research, applied mathematics, mathematicians, math in the news, mathematics education, math and the arts and more. Recent posts: "How Quadratic Reciprocity Is Like Dealing Cards" and "Exploding Myths About the History of Science."

"Russell's Paradox: Here's Why Math Can't Have A Set Of Everything," by Andy Kiersz. Houston Chronicle, 25 November 2013.

In this piece taken from his blog in the Business Insider, Andy Kiersz discusses Russell's paradox, and the necessity of careful, axiomatic definitions for avoiding the absurdities that crop up in logic and mathematics otherwise. In "naive set theory," a set is just a collection of things, and if defined correctly, a set can contain itself--one example being the set of all sets. Russell's paradox concerns the set of all sets which do not contain themselves. Is this set a member of itself? If you work your way around the logic, you will see that it simultaneously must be, and cannot be. To get around this paradox and others like it, Kiersz points out that in the set-builder notation of Zermelo-Fraenkel set theory, every set is specified as a subset of a given set of objects. This makes it easy to exclude the word "pizza" and the state of California from the set of things which are not natural numbers--by specifying which things count as, well, things--and effectively prohibits sets from being members of themselves, short-circuiting Russell's paradox.

"Together and Alone, Closing the Prime Gap," by Erica Klarreich. Quanta Magazine, 19 November 2013.

If you thought you'd heard the last from the twin primes conjecture, boy were you wrong. Since Yitang "Tom" Zhang stunned the mathematical world with his May proof that there are infinitely many pairs of primes separated by no more than 70 million, a flurry of activity has been centered on that arbitrary but enormous number. On May 30, Scott Morrison of Australian University in Canberra dropped that distance to 56 million and change. The comments on his blog post chronicle the bound's precipitous drop over the next few days, engineered by Morrison, Terence Tao, and others. By the end of May 31st, Morrison had brought the bound down to 42 million and change; by June 2nd, Tao had introduced improvements bringing the bound down to 13 million and change. By June 4th, Tao had created the Polymath Project, an open, online collaboration to improve the bound, and by June 27th, the maximum infinitely recurring separation between primes was 4,680. "At times, the bound was going down every thirty minutes," says Tao. But it seems the prime gap conjecture was an idea whose time had come: on November 19th, University of Montreal postdoc James Maynard posted an independent proof showing that there are infinitely many pairs of primes no further than 600 apart. This fascinating article takes a close look at some of the working parts of Zhang's and Maynard's proofs, the techniques being used to improve them, and the interplay between open collaboration and independent research that has driven the advances. Zhang's proof involves three pieces, each of which has been refined by the Polymath Project. First, Zhang used a collection of results by Pierre Deligne to draw conclusions about the distribution of primes, and in turn derived specifications for a new class of sieves--which Klarreich describes as "a comb with some of its teeth snapped off." Second, he used results from the calculus of variations to determine how many teeth one of his sieves would need to "catch" infinitely many pairs of primes. Finally, he calculated how large a comb he would need to start with to end up with a sieve with enough teeth. Progress has been made on all three fronts, even eliminating Deligne's difficult machinery from the proof. But Maynard has taken a different approach, by looking at the sieves themselves and obtaining more precise information about them, to show that certain sieves are much more powerful than originally thought. The Polymath Project is already working on Maynard's result, hoping that his insights can be combined with theirs. Meanwhile, Zhang has a "secret weapon" in reserve, a technique he developed before publishing his proof, which may bring the bound down even further--so stay tuned.

[See/hear also: "And The Number Of The Year Is... The Lowly 2!" from NPR's Math Guy Keith Devlin and Scott Simon (Dec. 21) and "Progress made toward twin prime proof," by Dana Mackenzie--one of Science News's top news stories of 2013. Mackenzie also wrote an article, "Prime clusters may go all the way," in the 11 January issue of Science News.]

This whimsical story discusses an equally whimsical paper by Ingo Althöfer, a mathematician at the University of Jena in Germany. In the paper, he describes mathematically oriented games in which a bunch of Lego toy pieces are run through a washing machine (warm water, no detergent, no spin cycle). The washing machine tosses and mixes the Legos in a more or less random fashion. Lego pieces get stuck together, knocked apart, and stuck together again. What kinds of shapes emerge from this process? Read the PopSci article to find out, or go straight to the source, Althöfer's paper: "Random Structures from Lego Bricks and Analog Monte Carlo Procedures".

In the hope of understanding genius, Rudolf Wagner gathered many brains in the 19th century, including that of Carl Friedrich Gauss. Recently it was discovered that the brain labeled as Gauss's was actually that of Dr. Conrad Heinrich Fuchs. Renate Schweizer, who discovered the mistake, thinks that the brain had been mislabeled since the 1860s. She adds that anatomically Gauss's actual brain is not exceptional. [For more on this story, see Tony's Take]

The recently released results of the 2013 National Assessment of Educational Progress indicate that since 2011, the average math score of American fourth graders has improved by three points, and the average math score of eighth graders has improved by one point, on a 500-point scale. Although the scores show general improvement, only 42 percent of fourth graders and 36 percent of eighth graders are achieving "proficiency level" in math, a "less than rosy picture" according to the author. Tennessee and the District of Columbia, which recorded the largest score increases in the country, both credit their progress to implementation of the Common Core State Standards for curriculum and enhanced teacher evaluation programs. Across genders and ethnicities, math results indicated Hispanic students improved 2 points and female students improved 1 point, but gaps persisted between Hispanic or black students and white students, as well as between male students and female students.

"Why do scientists swear by Mathematics?", by Mayank Vahia. Daily News and Analysis, 2 November 2013.

Dr. Mayank Vahia writes an interesting article for the Indian broadsheet newspaper, Daily News and Analysis (DNA) about how everyone can learn to appreciate mathematics. Dr. Vahia's piece is based on answering a very fundamental question: Why do scientists swear by mathematics? The answer boils down to "Because it is really useful," but Dr. Vahia takes the reader on a fun and exciting journey from prehistoric times up to the present day. Dr. Vahia starts by explaining how mathematics originally came to humans as a counting system, probably to keep track of the number of their livestock. Since humans have 10 fingers, most early cultures had special symbols for units of 5 or 10 similar to the Roman numerals. Though such numerical systems come naturally, they are not suited for adding or subtracting. Mathematics took a major step forward when a number system similar to the one we use today was introduced. The new number system allowed for introduction of concepts such as multiplication and division, also the invention of a number representing no value, the number zero. Armed with division and multiplication, the field of algebra soon followed creating the foundation for scientists of the 16th and 17th centuries such as Newton who were able to describe nature's patterns using simple algebraic equations.

Dr. Vahia's piece does a great job describing mathematic's evolution through the ages and its close relationship to science. A highly recommended read.

In this article, Southern New Hampshire University (SNHU) mathematics professor Susan D'Agostino describes why her college--which offers many career-oriented degrees--decided to develop a mathematics major, and how they went about recruiting and retaining students. As is typical at other regional institutions, a large proportion (one-third) of the students attending SNHU are the first in their family to attend college. By offering a mathematics degree, the university is serving first-generation students who "represent an untapped pool with potential to increase the quantity and quality of highly educated workers in areas of national need." In order to attract students, "the launch of [the] program included an awareness campaign alerting students to a range of career and graduate-school options in math." These have included a well-attended panel of professionals, all of whom were undergraduate math majors, as well as visits to entry-level math courses by math faculty who explain "why courses with unfamiliar names like 'differential equations' or 'regression analysis' are interesting and worthwhile." At the same time, the program offers students "a highly social Math Club, potential paid employment as math tutors, well-attended faculty office hours, and career counselors who are eager to place majors upon graduation." D'Agostino is proud to report that SNHU currently has 27 math majors and 50 math minors. 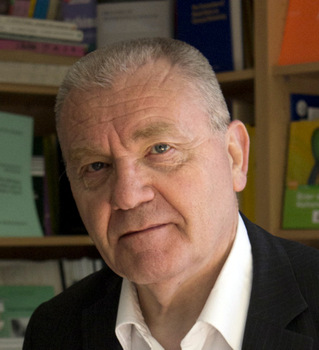 Science's News and Analysis section has a piece about the newly appointed head of the European Research Council (ERC), mathematician Jean-Pierre Bourguignon (left). The ERC is a young agency and has become popular among European scientists for its prestige and relatively easy procedures. The Frenchman Bourguignon has headed the Institute of Advanced Scientific Studies (IHÉS), a private institute in the southern suburb of Paris, for the last 19 years but will at the age of 66 succeed Austrian sociologist Helga Nowotny at the ERC on January 1. Bourguignon is credited with giving IHÉS a solid financial footing through worldwide fundraising. Bourguignon is also known for his enthusiastic educational efforts, which include a 2012 video that went viral called A Beautiful Formula, in which Bourguignon spends eight minutes illustrating the beauty of Euler's identity. "He is extremely dynamic, efficient and reliable," says Daniel Barlet, a mathematician at the University of Lorraine. The more recent Science article asks Bourguignon three questions about why he took the job and about the ERC. Read more from the interview. Photo by Jean-François Dars. 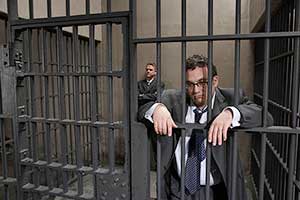 Last year, two scientists uncovered interesting new strategies for Prisoner's Dilemma, the age-old game in which two prisoners must decide whether to confess or remain silent, with one prisoner's payoff (or amount of points earned) depending on the other prisoner's decision. The article focuses on strategies in which prisoners make successive decisions based only on the outcome of the previous round, and a prisoner's strategy can be represented by the set of probabilities that he will remain silent after each of the four possible combinations of previous decisions. Early research highlighted the "tit for tat" strategy, in which a prisoner initially remains silent, then in each subsequent round adopts his opponent's previous decision. In contrast, the new strategies, termed "mischievous" by the author, allow one prisoner to control the other's score based on special algebraic relationships between the probabilities in the prisoner's strategy set. By applying the new strategies in evolutionary experiments, other scientists revealed that in general, generosity is a more robust strategy than mischief.