See also: The AMS Blog on Math Blogs: Two mathematicians tour the mathematical blogosphere. Editors Brie Finegold and Evelyn Lamb, both PhD mathematicians, blog on blogs that have posts related to mathematics research, applied mathematics, mathematicians, math in the news, mathematics education, math and the arts and more. Recent posts: "Why Should We Fund Math Research?," "Mistakes Are Interesting," and "How to get your friend to like math: A multipronged approach."

The Clay Mathematics Institute has offered prizes of US$1 million each for solutions of some outstanding mathematics problems. One of the problems concerns the Navier-Stokes equations, which describe fluid flow. This article reports on the claim of a Kazakh mathematician that he has solved the Navier-Stokes problem. The mathematician, Mukhtarbay Otelbayev of the Eurasian National University in Astana, Kazakhstan, has written a paper describing his results. However, the paper is in Russian, a language that many top experts cannot read. At this point, the paper is being checked by those who can read Russian and is also being translated into English. The jury is still out on whether Otelbayev's work is correct. 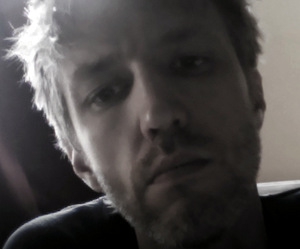 Most online dating website users realize some mathematics underpins search for love, but graduate student Chris McKinlay (at left) took the number-crunching a step further, by coding bots to scoop data from OkCupid profiles, analyzing the patterns, and crafting the perfect profile for attracting the woman of his dreams. After realizing late in the lab one night that his dearth of OkCupid matches resulted from failing to answer or denote as important similar compatibility-determining questions--out of thousands of potential options--as the women he was seeking to woo, he built a program that would evade OkCupid's data-harvest blockers by mimicking human usage patterns, while answering enough questions that he could obtain responses from more than 20,000 women nationwide who answered the same queries. McKinlay then used a special algorithm to clump the data, giving him a way to choose the right cluster – and by extension the right questions – to target for finding his dream girl. Fifty-six dates later, success: McKinlay's girlfriend, who emphasizes that building the relationship is more important than the "funny story" of how they got there, accepted his marriage proposal a year after their first date.

"The British amateur who debunked the mathematics of happiness," by Andrew Anthony. The Guardian, 18 January 2014.

In this excellently reported portrait of Nick Brown--a psychology master's student at the University of East London--Andrew Anthony puts Brown's recent takedown of a high-profile 2005 psychology paper in context. In the 2005 paper, business consultant Marcial Losada and psychologist Barbara Fredrickson claimed to apply the Lorenz equations to self-reported emotional data, and to mathematically derive a "critical positivity ratio" of 2.9013 measuring positive emotions to each negative emotion, separating individuals and groups that "flourish" from those that "languish." The paper, and the ratio, became a centerpiece of Fredrickson's work, and was touted in the subtitle of her pop psychology book, Positivity. Indeed, as Anthony conveys, Fredrickson's work was at the center of a shift in mainstream psychology occurring in the late 90s, which integrated pop psychology's focus on self-improvement into the (ahem, relatively) scientifically rigorous core of the discipline. This movement placed the "science of human strengths" and the optimization of human potential back at the center of academic psychology, after a focus on mental illness that followed the traumatic events of the First and Second World Wars. It resulted in a torrent of books on positive psychology, written by eminent psychologists including Mihaly Csikszentmihalyi, Martin Seligman, and Fredrickson, and aimed at the pop psychology market. These books, as well as lecture and consulting fees for businesses and other organizations, netted Seligman, Fredrickson, and their colleagues monetary rewards to match their professional esteem. All of which, Brown believes, helps explain his role in exposing Fredrickson's faulty logic. "If you want to be a whistleblower you have to be prepared to lose your job," says Brown. "I'm able to do what I'm doing here because I'm nobody. ... There are 160,000 psychologists in America and they've got mortgages. I've got the necessary degree of total independence." That, and just enough quantitative training: Brown's degree is in computer science, and while he can't solve differential equations, he can recognize them. This is more than many psychologists can say, including, perhaps, Barbara Fredrickson. After Fredrickson and Losada's paper was published, John Gottman, a psychologist who studies successful relationships, wrote to Losada questioning the paper's equations. "He never answered my email," says Gottman, and when he wrote to Fredrickson for clarification, "She said she didn't understand the math either."

"Mathematicians converge on Baltimore to discuss the science and art of numbers," by Julie Scharper. The Baltimore Sun, 15 January 2014. 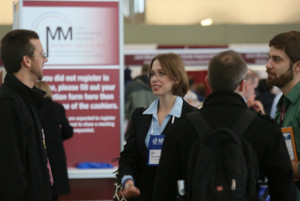 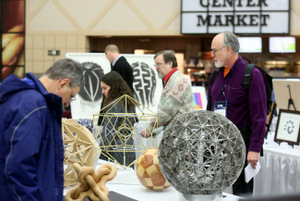 The Joint Mathematics Meetings were held in Baltimore, January 15-18. Scharper visited on the first day and wrote about her impressions of the annual conference, which drew just under 6,5000 people. She attended some sessions and talked to people about their impressions of the talks and the meeting in general. Scharper also writes about the Mathematical Art Exhibition and notes that Reza Sarhangi (Towson University), one of the organizers of the exhibition, explains that mathematics is much more than numbers. She writes that he told her that "mathematicians are fascinated by patterns, much as artists and musicians are." The exhibition drew many fans, as did the sessions and addresses held at the meeting, but Scharper closes with another important motivation to attend, voiced by Kenneth H. Rosen (AT&T Laboratories), "We get to see old friends...And that is a good reason to come." (Photos: Sandy Huffaker.)

"Researchers Reduce the Secret of Life--or, at Least, of Conflict--to a Simple Formula," by Paul Basken. The Chronicle of Higher Education, 10 January 2014, page A20.

In a recently published study in Nature's open-access journal, Scientific Reports, University of Miami physics professor Neil F. Johnson claims to have found a mathematical formula "that can both explain the course of the ['war on terror'] and help predict future terrorist attacks," says Basken. More than that, the formula--based on the analysis of multiple datasets representing over 100,000 events--models "both the timing and the casualties in all manner of human strife." However, some who have reviewed the study, while finding it intriguing, "say it's not clear whether it's reliable, useful, or based on sound science. Rather, say experts in both the social and physical sciences, it's another cautionary tale in the fast-growing practice of scientists who try to model and anticipate human behavior by crunching the vast volumes of data available to them," writes Basken. "Computers make it easy to find mathematical patterns in data, but a pattern by itself is not proof of anything unless the scientist can also offer a testable explanation for why the patterns might exist." Johnson "has acknowledged that his mathematical pattern allows for large uncertainties [but he] is holding firm." Read the study, entitled "Simple Mathematical Law Benchmarks Human Confrontations." 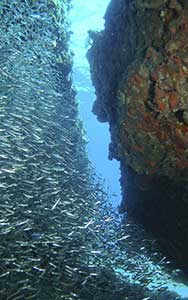 Theoretical biologist George Sugihara is taking aim at traditional methods of modeling fish populations by promoting data-driven nonlinear solutions to better safeguard species from a crash. While typical American fishery managers set catch limits based on linear models that rely on information about the biology of a given fish, such as reproduction rates, Sugihara's models use historical data on a variety of factors like fishing and water temperature to predict how a population will grow. Sugihara’s models harness the idea of chaos in that seemingly random fluctuations in a fish population can be explained and predicted by nonlinear models that account for multiple factors. Though fishery managers so far have been slow to adopt his models, Sugihara has demonstrated some success in accounting for past variability in fish populations, and he argues that his models will be better than the current methods at developing population numbers that are resilient to environmental disruptions.

Metamaterials are composite materials designed to exhibit unconventional wave properties, through exact engineering of the spatial patterning of physical properties such as permittivity (how easily the material takes an electric charge) and permeability (how easily the material takes a magnetic charge). They make possible the local and global manipulation of waves of all kinds--electromagnetic, acoustic, mechanical and elastic--as those waves pass through and interact with their precisely-honed substrates. Metamaterials have already been used to turn the science fiction of cloaking technology into science fact. Now, a team of researchers from Philadelphia, Austin, and Benevento, Italy has put forward a design which uses metamaterials to construct computing elements orders of magnitude thinner than current optical computing devices--at "wavelength scale," in fact, where the relevant wavelengths are those of visible light (less than a thousandth of a millimeter). The devices, which the team has dubbed "computational metamaterials," are remarkable not only for their size, but also because they represent and process information in an analog manner. The inputs and outputs to computational metamaterials are encoded in continuous fields of light, which are transformed during their propagation through the computational elements. The design also utilizes a powerful mathematical technology, albeit an old one: the Fourier transform. Input waves are Fourier transformed by passage through a graded-index dielectric slab (GRIN)--with output frequencies ranging along an axis transverse to the layers of the computer--and inverse Fourier transformed by a "complementary" GRIN before output. Metamaterial layers sandwiched between the two GRIN slabs allow frequency-specific multiplicative manipulations of the Fourier transformed data, implementing mathematical operations such as differentiation and convolution literally at the speed of light, as the coded data passes through the computer. The researchers' designs remain theoretical, and attaining the full promise of computational metamaterials will depend on further advances in nanofabrication techniques--for example, the ability to manufacture Fourier-transforming metamaterials thinner than the chunky GRINs, which may have submicrometer tolerances. Still, the team's advances suggest that the future may be analog, after all.

In this article, Qiu describes the extraordinary discovery of the earliest known multiplication table in base 10. The story began about five years ago with the donation of nearly 2,500 bamboo strips--"muddy, smelly, and teeming with mould"--to Tsinghua University in Beijing. Each strip contained a vertical line of ancient Chinese characters. Researchers at Tsinghua were able to carbon date the strips to around 305 BC, and determine that this jumble of strips--some of which were broken or missing--made up 65 ancient texts: Li Junming, a historian and paleographer at the university, notes that deciphering the texts was "like putting together a jigsaw puzzle." However, "21 bamboo strips stand out from the rest as they contain only numbers, written in the style of ancient Chinese," according to Feng Lisheng, a historian of mathematics at the university. When correctly arranged, as Qiu describes it, "a matrix structure emerges. The top row and the rightmost column contain, arranged from right to left and from bottom to top respectively, the same 19 numbers: 0.5; the integers from 1 to 9; and multiples of 10 from 10 to 90." Researchers speculate that the table was used calculate land area, crop yields, and taxes owed. "Such an elaborate multiplication matrix is absolutely unique in Chinese history," Feng notes. Math historian Joseph Dauben adds that it "certainly shows that a highly sophisticated arithmetic had been established for both theoretical and commercial purposes by the Warring States period in ancient China." See more about the table, including images, in Tony's Take.