On characteristics that lead students to become math majors, by Claudia Clark

A recently-published study has shown that two factors--being recognized for mathematical abilities and having an interest in mathematics--play a much larger role than simply doing well in mathematics in determining whether a student pursues a major in mathematics or other quantitative subject. The study, "Establishing an Explanatory Model for Mathematics Identity," appeared in the July/August issue of the journal Child Development. Some 9,000 college calculus students were surveyed for the study. Study researcher Zahra Hazari notes, "I think the story is you have to develop competence. But if you feel like you can do it, that’s not enough. You need to become interested in math or recognized for your math abilities to continue on." She adds that "recognition is even more important for women. If they feel that they have the abilities, and they’re never recognized, then they’re even less likely to become math people."

See "Why Many Students With A's in Math Don't Major in It," by Jill Bashay. US News & World Report, 22 June 2015. The research on which this article is based appears in "Establishing an Explanatory Model for Mathematics Identity," Cribbs, Hazari, Sonnert, and Sadler. Child Development, July/August 2015 (subscription required for full access).

On a nationwide job survey, by Lisa DeKeukelaere

Jobs in science, technology, mathematics, and engineering (STEM)-related fields are on the rise, according to the 2015 CareerCast survey of the 200 most populated U.S. jobs. Accounting for characteristics like hiring outlook, salary, and work environment, the survey ranked actuary as the top job, followed by mathematician at #3, statistician at #4, and data scientist at #6. Actuaries often work for insurance and financial companies and analyze statistics to determine the financial consequences of current and future risk, with a median salary of $94,209. The 2015 survey marks the first time that STEM jobs dominated the top 10, and the article notes that there are more STEM jobs available than qualified people to fill them, which means employers are more likely to offer favorable hiring packages with flexible schedules to win out amongst the competition.

On a 150-year old puzzle, by Claudia Clark

Erica Klarreich begins this article by discussing a puzzle that first appeared over 150 years ago in the Lady’s and Gentleman’s Diary, a recreational mathematics journal. "Fifteen young ladies in a school walk out three abreast for seven days in succession: it is required to arrange them daily, so that no two shall walk twice abreast," "abreast" meaning in a group. Klarreich notes that "its publication helped launch a field of mathematics called combinatorial design theory [that has] applications in experiment design, error-correcting codes, cryptography, tournament brackets and even the lottery." Yet, Klarreich writes, "the most fundamental question in the field remained unanswered: Do such puzzles usually have solutions?" Now that problem has a solution: in January 2014, Peter Keevash, a young mathematician at the University of Oxford, "established that, apart from a few exceptions, designs will always exist if the divisibility requirements are satisfied." In a second paper posted in April on the scientific preprint site arxiv.org, Keevash showed how to count the approximate number of designs for given parameters.

On a team of math modelers' analysis of the fate of missing Malaysian flight, by Allyn Jackson 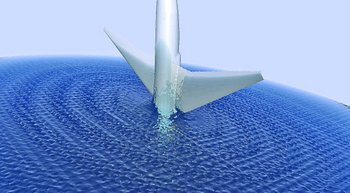 In March 2014, Malaysia Airlines flight MH370, en route from Kuala Lumpur to Beijing, disappeared without a trace. More than a year of intensive searching and investigation have not produced any definitive explanation for how and why the plane vanished. The April 2015 issue of the Notices of the AMS carried an article describing a possible explanation. Using the mathematics of fluid dynamics and supercomputer simulations, the seven authors of the article, led by mathematician Goong Chen of Texas A&M University, modeled the conundrum as a classic "water entry problem." Assuming that the plane went down in the Indian Ocean, the team examined how the angle at which the plane entered the water is related to the damage sustained. Their simulations predict that, if the plane entered the water at a vertical angle---that is, in a nose-dive---it would have sustained much less stress than at other angles and could have remained largely intact. The wings have would broken off and, given their weight, sunk to the ocean floor. Shorn of wings, the plane's fuselage would not have broken up but would have plunged missile-style to a depth of 30 to 40 meters in a matter of seconds and quickly would have reached the ocean floor. The press coverage was sparked by a news release from Texas A&M University at Qatar, which was reproduced verbatim by many news outlets. The news release quotes Chen as saying: "The true final moments of MH370 are likely to remain a mystery until someday when its black box is finally recovered and decoded. But forensics strongly supports that MH370 plunged into the ocean in a nosedive." (Image: Texas A&M University at Qatar/Notices of the American Mathematical Society.)