On the U.S. IMO team, by Mike Breen

Most of the previous summary is based on the story from The Washington Post. In the other coverage below: Erickson focuses on coach Po-Shen Loh, who went to high school in Madison, WI; Gates writes about Seyoon Ragavan of Australia, who won a gold medal and helped the team finish sixth overall, its highest finish ever; Chakrabarti interviews coach Loh, and team members Ryan Alweiss and Yang Liu; and the CTV story is about Alex Song, of the Canadian team, who earned a perfect score at the IMO for his paper. 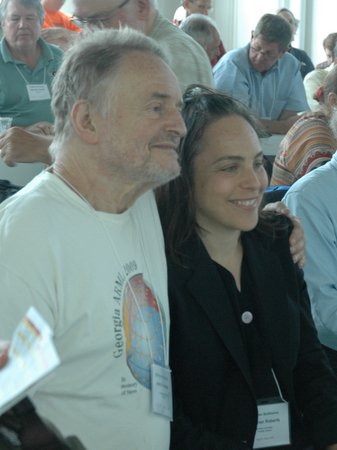 In this lengthy article, the writer describes the life and work (or play?) of mathematician John Conway, beginning with his trip in 1956 to Cambridge University as an incoming undergraduate student, and ending with his current work. Roberts, who has written a recent book on Conway, discusses his major discovery of the Leech lattice's symmetry in the late 60s, his discovery of surreal numbers, his development of the "The Game of Life," and his recent creation of "The Free Will Theorem." She also talks at length about Conway's creation of his "doomsday rule,"--an algorithm Conway created for determining the day of the week for any date--and the way he has used this game to test himself as he has gotten older. The article emphasizes Conway's lifelong love of playing and inventing games, some of which have led to his remarkable discoveries. Roberts writes: "For Conway it is mathematics that allows him to clear away the clouds of reality. As he put it, 'Math was always there for me.' It is the realm where he finds solace and infinite unadulterated pleasure. He's retired, but he keeps on playing, and as he himself noticed, he's now being more productive than ever." (Photo of John Conway and Siobhan Roberts, taken by Annette Emerson at the Bridges Math & Arts Conference in Baltimore, MD, July 2015.)

See "The world's most charismatic mathematician," by Siobhan Roberts. The Guardian (UK), 23 July 2015.

On using math to analyze leads in sports, by Allyn Jackson 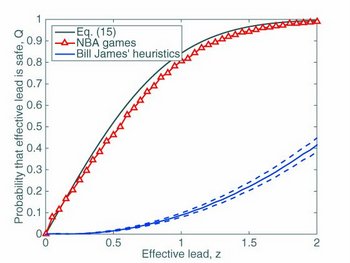 Want to know what size lead a basketball team needs in order to have a 90 percent chance of winning in the remaining seconds of the game? Just take the square root of the number of remaining seconds and multiply by 0.4602. That's the conclusion of work by Aaron Clauset, a computer scientist at the University of Colorado at Boulder, and his collaborators Marina Kogan and Sidney Redner. After analyzing a huge amount of data from basketball, football, and hockey games, they formulated "a simple model in which the score difference randomly moves up or down over time," the New Scientist says. The model is surprisingly accurate, considering that it incorporates no features of the games. It works well for games like basketball, where the scores are fairly large numbers, but is not very reliable for games like soccer, where scores are small. "[S]o you probably shouldn't use it when betting on the English Premier League," the magazine says. Image: Probability that a lead is safe versus the dimensionless lead size for NBA games, showing the prediction from an equation in the paper (eq. 15), the empirical data, and the mean prediction for Bill James's well-known "safe lead" heuristic, courtesy of Aaron Clauset, Marina Kogan, and Sidney Redner.

On a museum's math error that really wasn't, by Claudia Clark 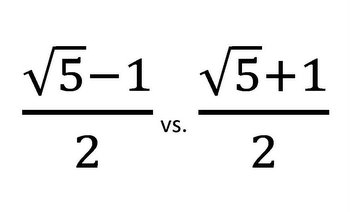 Below we've cited one of several news articles that describe the story of an error--which turned out not to be an error--found by 15-year-old Joseph Rosenfeld in the "Mathematica: A World of Numbers...and Beyond" exhibit at the Museum of Science in Boston, Massachusetts. During a visit to the museum on June 4 with his family, Rosenfeld saw that what appeared to be the formula for the Golden Ratio contained a minus sign, and not a plus sign, between the two terms in the numerator. After Rosenfeld left a note to that effect at the front desk of the museum, the museum sent a letter to the Rosenfeld family, agreeing that the minus sign was wrong and that they would correct it, if they could do so without damaging the exhibit. However, once news of this story went viral, others quickly noticed that the exhibit had in fact used the reciprocal of the Golden Ratio, correctly identified as φ in the display. On June 8, the museum released a statement, explaining that "the way the Museum present the Golden Ratio in its exhibit is in fact the less common--but no less accurate--way to present it." Image: The exhibit’s stated value is on the left. It represents the ratio of the short side to the long side in a golden rectangle. Undoubtedly, Rosenfeld was thinking of the value on the right, which is the reciprocal ratio.

See "Math error at Museum of Science? Not so fast." by Cristela Guerra. The Boston Globe, 8 July 2015.

On not being a female role model, by Samantha Faria 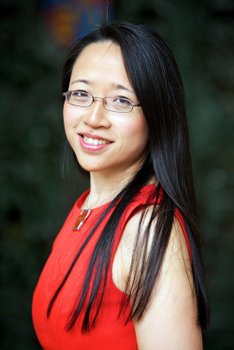 Mathematician Eugenia Cheng could be an excellent role model for young women who would like to become mathematicians. She's a successful mathematician who has recently written a book that has received a good deal of attention. But she would rather that role models were unnecessary and people believed that any career is possible, regardless of gender. Cheng grew up in an egalitarian household with both parents working professional jobs. Her dad was often the primary caregiver and prepared the family meals. She attended an all-girls school so gender expectations were never apparent. "Plenty of girls chose math and science. Thinking back now, it's funny to imagine a class full of girls who have chosen physics. But at the time, we thought nothing of it," Cheng explained. The head of her high school tried to dissuade her from studying math in college claiming that the boys would be better prepared than she. Despite the warning, she pursued the subject and excelled. Although Cheng wishes there was no longer a need for "female" role models she understands that "many people need to see women succeeding at things in order to be convinced that it is possible." Photo: RoundTurnerPhotography.com.

Also see previous summary of media coverage of Cheng and her work on Math Digest, On Math and art, by Claudia Clark; "Combining Math and Music" video; "Happy Pi Day" video; and links to reviews of her recent book, How To Bake Pi: An Edible Exploration of the Mathematics of Mathematics.

On streamlining and preserving the classification of finite simple groups, by Lisa Dekeukelaere

Group theorists are working to ensure that one of their most important proofs--of the Enormous Theorem--remains accessible to future generations that are unable to tackle the 15,000 pages the proof currently requires. The Enormous Theorem shows that finite simple group, the building blocks of finite groups, can be partitioned into four categories, and it lists all of the categories. The proof consists of more than 100 journal articles written over decades, and as the mathematicians who first completed it reach their seventies, they are rushing to draft a shorter, "second generation" proof so that their successors will be able to understand and build upon its enormity. The author notes that despite the seeming obscurity of the theorem to the general public, our society has a pattern of scientific advances based on principles proved decades in the past, suggesting opportunities for the Enormous Theorem's future.

On beating traffic, by Lisa DeKeukelaere