On American Students' Drop in Math Skills, by Samantha Faria

Despite more testing and a new curriculum the results of a nationwide test reveal that American students' math skills have slipped. Education officials did not expect this and have suggested multiple reasons as potential causes for the drop. Some educators blame the Common Core curriculum and believe that it has caused confusion among teachers and students. "Right now, what’s going on in many states is a wholesale change in math instruction," said Daniel Koretz, a professor of education at Harvard. The Obama administration weighed in that there are too many high-stakes tests and admonished school districts to cut down on, "the number of tests and make them more purposeful." The gap in school success between white and minority students is ever present as well as the gap between children from affluent and poor families. William J. Bushaw, the executive director of the National Assessment Governing Board, which sets policies and achievement levels for the tests, optimistically explained, "It's not unusual when you see lots of different things happening in classrooms to first see a slight decline before you see improvement."

On advances in graph theory, by Annette Emerson

"Four years ago, the mathematician Maria Chudnovsky faced an all-too-common predicament: how to seat 120 wedding guests, some of whom did not get along, at a dozen or so conflict-free tables." What a great beginning of this article about graph theory by Natalie Wolchover, who continues, "Luckily, the problem fell squarely in her realm of expertise. She conceived of the guests as nodes in a network, with links between incompatible nodes. Her task was to color in the nodes using a spectrum of colors representing the different tables. As long as connected nodes never had the same color, there would be no drama at the reception." The article explains that "Networks of related objects, be they nodes or wedding guests, are known to mathematicians as 'graphs,' and graph coloring is the much-studied act of partitioning these objects into conflict-free sets." Chudnovsky and her collaborators are working towards proving a theorem for coloring all "perfect graphs," which are explained by Wolchover.

The article includes several illustrations and this interactive by Andrew Silver for Quanta Magazine: "Select a color and then a node to color in this simple perfect graph. When the entire graph is colored in, "Check" that no connected nodes share the same color."

On the bicentenary of the birth of George Boole, by Mike Breen

This year, specifically November 2, marks the 200th anniversary of British mathematician George Boole's birth. Boole came up with an algebraic formulation of the laws of logic, which now govern the basic operations of computers. In the past year, University College Cork in Ireland, where Boole became the university's first professor of mathematics, and the University of Lincoln, in his hometown, have organized many events to honor Boole, including showing a film narrated by Jeremy Irons, The Genius of George Boole. Virginia Teehan, director of cultural projects at University College Cork, which commissioned the film, says about Boole, "The application of his research has been vital in all new technologies today, and he hasn’t been recognised."

See "How a Victorian mathematics don became a digital pioneer," by Nicola Davis. The Guardian, 17 October 2015.

On recreational mathematics, by Claudia Clark 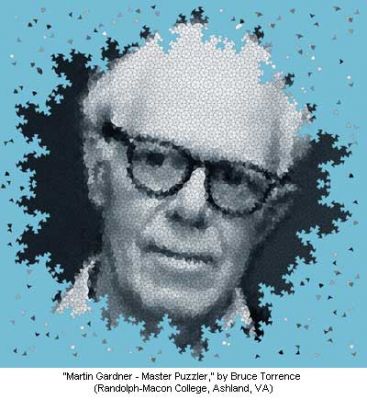 In this opinion piece, University of Maryland mathematics professor Manil Suri discusses the importance of recreational math, in general, and the work of Martin Gardner, in particular. He recalls Gardner’s "Mathematical Games" series, which "introduced millions worldwide to the joys of recreational mathematics" in its over 25-year run in Scientific American. Each of Gardner's puzzles "required different, inventive techniques to crack. The solution in such puzzles usually pops up...through a flash of insight, rather than emerging steadily via step-by-step deduction as in Sudoku," Suri writes. "Mr. Gardner's great genius lay in using such basic puzzles to lure readers into extensions requiring pattern recognition and generalization, where they were doing real math."

Gardner himself was a long-time advocate of including recreational math in school curriculums: in his August 1998 column, he opined that "it should be regularly introduced as a way to interest young students in the wonders of mathematics." Indeed, a recently published paper in the Journal of Humanistic Mathematics "points out that recreational math can be used to awaken mathematics-related 'joy,' 'satisfaction,' 'excitement' and 'curiosity' in students," a goal reflected in the educational policies of many countries. While such goals are not part of the Common Core standards, Suri reports that some school districts are incorporating recreational mathematics into their curriculum.

See "The Importance of Recreational Math," an Op-Ed by Manil Suri, New York Times, 12 October 2015, and see many more resources related to "Mathematics, Magic, and Mystery", the theme for Mathematics Awareness Month 2014. 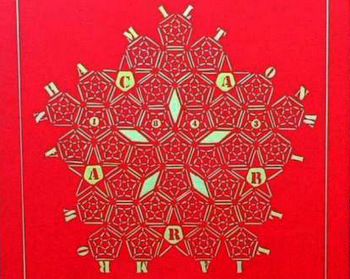 In an effort to spruce up the city of Dublin, city council members sought out people to paint traffic-light boxes to make them more interesting. Rob Doyle took this opportunity to honor mathematician, William Rowan Hamilton. "Hamilton had invented a game called the Icosian game, so the shape of the Icosian game is the basis for the stencil [at left]," Doyle explained. He went further to insure that the number of faces in the design of the perimeter of the final illustration equaled the number of letters in Hamilton’s full name. Although a 19th century mathematician, Hamilton continues to inspire portraits, illustrations, sculptures, stamps, poetry, documentaries, and literature. Annually, people gather to retrace his steps along the Royal Canal where he famously carved his formula for quaternions. (Photo from The Irish Times of art by Rob Doyle in Cabra, near Dublin.)

On an interview with Talithia Williams on increasing opportunities for minorities in STEM, by Annette Emerson 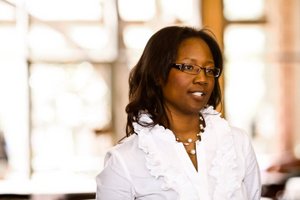 Maria Klawe, president of Harvey Mudd College, talks with Harvey Mudd mathematics Professor Talithia Williams about an annual math and science conference for African American middle and high school girls to get them interested in and excited about STEM careers. Williams started the conference, now in its fourth year, in partnership with Sacred SISTAHS (Sisters In Solidarity Teaching And Healing our Spirit), a local non-profit organization.

"We engage the girls in fun, hands-on math and science lessons. For example, one of our math professors led a session in which the girls related math concepts to hands-on experiments in fluid dynamics. I led a session on working with data and how to use statistics to better understand ourselves and our world. A local graphic artist taught a session on how she uses computer graphing techniques and software in her work. In both the talks and the hands-on activities, we showcase African American women who are successful and excited about their careers in STEM. We try to get the girls excited about studying math, science and engineering." Williams says the girls will struggle, but she tells them it's important for them to work hard and seek help. Williams herself is a role model, and says, "I know from my own experience that seeing a role model who looks like you, who is successful in a STEM career, can be a pivotal moment."

In sessions for parents the conference covers "The top 10 questions you should ask your daughter's guidance counselor," and gives parents a list of courses their daughters should take to prepare for college.

See "Increasing Education Opportunities For Minorities In STEM," an interview by Maria Klawe with Talithia Williams, Forbes, 7 October 2015. See also posts by Talithia Williams on the eMentoring Network in the Mathematical Sciences Blog. 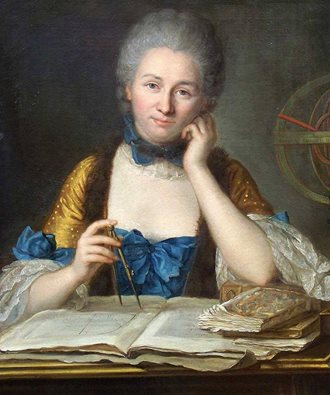 "A spirited debate raged in 18th century Europe about what was driving the movements of the planets," the article begins. "In England, Sir Isaac Newton and his followers said it was gravity....On the other side of the Channel, many Continentals favoured René Descartes' theory of a swirling cosmic 'ether' that... swept up the planets in its wake." The author goes on to discuss the life and work of Émilie du Châtelet, a mathematician who, with playwright, Voltaire, championed Newton's theory of planetary motion in Continental Europe. Born in 1706 in Paris to an aristocratic family, Châtelet was "passionate in both her intellectual and amorous pursuits." She educated herself in higher mathematics and physics. Her initial fame came from the book Institutions de Physique (Fundamentals of Physics), in which she "bravely attempted to integrate the work of Newton and Leibniz," according to Arianrhod. "Émilie's brilliance lay in her ability to understand the subtleties of both Newton's theory and Leibniz's philosophy." Her later work “includes what is still the definitive French translation of Newton's Principia," as well as a 180-page appendix, which included "her own reworking of some of the Principia's key proofs in the language of calculus." (Portrait by Maurice Quentin de La Tour [Public domain], via Wikimedia Commons.)

To read more about Émilie du Châtelet, and her partnership with Voltaire, see "Émilie du Châtelet: the woman science forgot," by Robyn Arianrhod. Cosmos, 5 October 2015, and "A woman of gravity," by Patricia Fara. New Scientist, 28 May 2016..

On the math of wing design, by Lisa De Keukelaere

Using modeling software and a single differential equation, Florida State University mathematician Nick Moore calculated the ideal distribution of wing flexibility for an object to take flight, as detailed in a recent paper in the Physics of Fluids journal. While most airplane wings are rigid, high-speed camera shots of insects in flight shows that their wings are flexible, which suggests that this feature could improve performance in man-made devices. Testing the thrust production for various distributions for flexibility along the length of a wing, Moore’s models showed that a linear distribution with highest flexibility at the front of the wing is more efficient in producing thrust than a uniform distribution of flexibility, whereas a rigid wing is least efficient. His results also indicated that a torsional spring—a portion of the wing that twists as the wing flaps—can increase thrust production by up to 36% over wings with variable flexibility.

Although films like The Imitation Game and Andrew Hodges' 1983 biography depict Alan Turing as the man who singlehandedly used mathematics and computing to save the Allies from the Nazis in World War II, the truth is that others contributed to his accomplishments and at times undertook similar work simultaneously. Turing is best known for his paper on the "Turing Test" to determine whether a computer can think, for his work on the famed German Enigma machine, and for allegedly inventing the first computer--the "Turing machine." However, Polish mathematicians had cracked an early version of the Enigma by 1932, and their work was the foundation of Turing's effort to break subsequent codes. The Turing machine arose from Turing's quest to address a theorem that an algorithm composed of a finite number of instructions can compute any function to any desired precision, but another mathematician already had answered the question, and several others were working on binary machines at the same time.