On performing vs. learning, by Samantha Faria

It is not uncommon for teachers to begin the school year with a mathematics test, presumably to learn more about what the students already know, but this method is not used in English or history class. Students learn best in an environment where, "they feel free to try ideas, fail, and revise their thinking." By testing students so often, with short, closed questions, they do not get to try out various ideas and are often most worried about their grade. Students need to be quick with their answers yet mathematicians most often think "carefully and deeply" and understand that it can take years to arrive at a solution. "When educators teach real mathematics--a growth subject of depth and connections--the opportunities for learning increase and classrooms become filled with happy, excited, and engaged math students."

See "The Math-Class Paradox," by Jo Boaler. The Atlantic, 31 December 2015. You may also like a short video of 2016 Who Wants to Be a Mathematician champ Ankan Bhattacharya comparing most math instruction with teaching art by using painting by numbers.

Who Wants to Be a Mathematician contestants in the news, by Mike Breen

On being smarter, by Mike Breen

The theme of the 12 December issue of New Scientist is "Get Smarter" and about half of the shorter articles that related to the theme related to mathematics. One gave readers tips on coping with uncertainty so that they would be better able to spot the difference between a "damned lie" and a statistic. A similar article involved probability and advised people to use the subject to understand coincidence and balance risk. Exponential growth was the subject of another article, concentrating on the effect that compound interest has in long-term savings. Finally, game theory was the theme of the fourth article related to mathematics, which alluded to the bar scene in the film A Beautiful Mind and prisoner's dilemma.

An exhibition about Ada Lovelace, by Claudia Clark.

If you're going to be in London between now and the end of March, you'll want to stop by the Science Museum to see an exhibit honoring the life and mathematical work of Ada Lovelace on the bicentenary of her birth. In addition to being the daughter of the famous poet Lord Byron, she was, Robinson writes, "the first person to discuss the concept of programming a computer: In the 1840s, she issued an extensive and farsighted commentary on a calculating machine known as the Analytical Engine, created by the mathematician and inventor Charles Babbage." The exhibit contains Babbage's Difference Engine and Analytical Engine, as well as a model of a Jacquard loom: a type of loom, invented in 1805, that used punch cards to automate the process of weaving. Also on display are two portraits of Lovelace, as well as "originals of her letters from the collections of the British Library and the Bodleian Library...which allows the visitor to follow the progress of her work and her interactions with Babbage, Michael Faraday, and others." 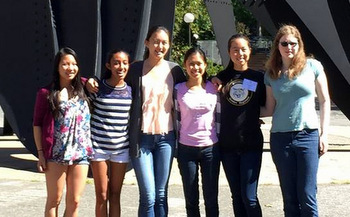 This article is about the prize-worthy math achievements of 17-year-old high school senior Ellen Li, who attends Buchholz High School in Gainesville, Florida. Li's love of mathematics—and challenging herself—started early. "She has been in math competitions since the fourth grade and has been ranked nationally in recent years," writes Nuñez. For instance, at the recent Math Prize for Girls competition held at MIT, Li placed 10th out of 293 participants. Li is the president of the nine-time national champion Buchholz High School Math Team which, in addition to participating in competitions, spearheads an "outreach program that brings competitive math to lower socioeconomic elementary and middle schools," and provides after-school tutoring and summer camps. Math Team coach Will Frazer calls Li "a central figure in this community for mathematics." Next year, Li would like to study applied math and computer science at MIT. "I'm really interested in data analysis and big data," she says. "I feel like data is one of the keys to technical advancement."

In addition to mathematics, Li is passionate about music. She plays the piano almost every day, gives piano lessons, and enjoys playing once each month for patients in the cancer unit of a local hospital. And, with her mother, Li provides financial support for two underprivileged sisters in China, with the intention of sponsoring them through college. (Photo: Ellen Li (third from left) and some of her Buchholz teammates at the MIT Math Prize for Girls.)

See "For math star, numbers, music and volunteerism all add up," by Gabriella Nuñez. The Gainesville Sun, 8 December 2015.

On the kidnapping of an NYU computer, by Lisa DeKeukelaere 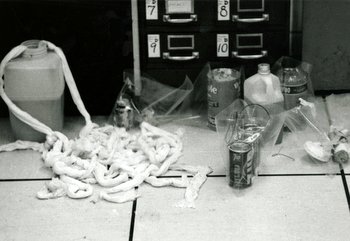 Part mini-biography of Abel Prize-winning mathematician Peter Lax, part 1970's crime thriller, this article tells the story of four NYU professors who fought to save a $2 million computer from antiwar protestors. Lax and his cohorts first tried to stop a group of students--protesting the Vietnam War and the Kent State shootings--from taking over the building housing the computer; when that failed, they later worked to extinguish a toilet paper-fused bomb left next to the machine and hail the fire department. Two NYU employees subsequently received three-month prison sentences for their role in the affair. Lax, who was born in Hungary and fled to the U.S. to avoid the Nazis, said the machine had not been involved in any war-related efforts, and he told his wife he confronted the dangerous situation because he just wanted to save the computer. (Photo courtesy of the New York University Archives.)

See "The Mathematicians Who Ended the Kidnapping of an N.Y.U. Computer," by James Barron, New York Times, 6 December 2015.