On Babylonian astronomers' calculations of Jupiter's position, by Allyn Jackson

Cuneiform tablets show that the ancient Babylonians had sophisticated methods for predicting the positions of the planets in the sky. Until now, it was thought that those methods used only arithmetical computations---addition, subtraction, and multiplication. That some of the tablets showed a geometrical figure, namely a trapezoid, had remained a mystery. In 2015, Humboldt University historian Mathieu Ossendrijver discovered a tablet that had been overlooked and that offered a way to decode the meaning of the trapezoids. Ossendrijver found that the Babylonians obtained the trapezoids by making time-velocity graphs of Jupiter's motion. "By calculating the area inside the trapezoid, Babylonian astronomers could find where the planet would be in the sky," the New Scientist article says, noting that the Babylonians "looked to astrology to figure out everything from weather forecasts to the price of goods." Ossendrijver writes: "These computations predate the use of similar techniques by medieval European scholars by at least 14 centuries." The ancient Greeks also used geometrical methods in astronomy, but only to represent the positions of the heavenly bodies. The Babylonian methods that Ossendrijver uncovered are geometrical in a very different sense: "[they] describe configurations not in physical space but in an abstract mathematical space defined by time and velocity."

Finding the most-efficient packing of balls, by Allyn Jackson 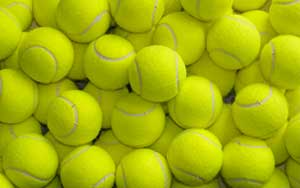 Finding the most-efficient packing of balls is a question mathematicians have long been interested in. But what about all the other packings, the ones that are inefficient and disordered? This article discusses a recent attempt to address that question---namely, to estimate the number of disordered packings of 128 balls in a fixed volume ("Turning intractable counting into sampling: Computing the configurational entropy of three-dimensional jammed packings", by Stefano Martiniani, K. Julian Schrenk, Jacob D. Stevenson, David J. Wales, and Daan Frenkel, Phys. Rev. E., January 25, 2016). The answer? A mind-bending 10250, much more than the 1080 atoms in the known universe. To make the estimate, the researchers thought of the balls as being inside a box, where they can be jiggled around until they jam themselves into some arrangement. From this the reserachers created an "energy landscape" representing all possible energies of the balls: "As the balls jiggle loosely in the box, they have more energy, placing them at a higher elevation in the landscape," Aron writes. "Settling down into a jammed state corresponds to the bottom of a valley, as the balls can't move into a lower energy state." The researchers modeled the energy landscape by computer, which allowed them to estimate average size of the valleys. "Since they know the size of the entire landscape, dividing by the average gives a good estimate of how many valleys, and thus jammed packings, there are---leading to the figure 10250."

On using math to solve conspiracy debates, by Claudia Clark

You have probably heard at least one of these four anti-science conspiracy theories: 1) the Apollo moon landings were faked; 2) human-caused climate change is a hoax; 3) there is a link between vaccines and autism; and 4) a cure for cancer exists but is being kept hidden by vested interests. In the recently-published paper "On the Viability of Conspiratorial Beliefs" (PLOS One, 26 January 2016), Oxford University physicist Dr. David Robert Grimes shows how he developed a simple mathematical model using Poisson statistics--and data from actual conspiracies--to estimate the amount of time it would take for these four famous conspiracy theories to be true, given the intrinsic probability of a conspiracy failing and the estimated maximum number of people required to be in on the intrigue. For example, he found that the moon landing hoax conspiracy, which would have required an estimated 410,000 people to be in on the secret, would have been exposed in about 3 years and 8 months. Grimes then estimated the maximum number of people who could keep a conspiracy a secret for different periods of time. For example, for a conspiracy to last for 10 years, no more than about 1250 people can be involved; for it to last 100 years, no more than 125 people can be involved. "My results suggest that any conspiracy with over a few hundred people rapidly collapses," Grimes tells Hinckley, "and big science conspiracies would not be sustainable." While Grimes recognizes that not everyone who believes in conspiracy theories that are contradicted by evidence will be swayed by his arguments, he hopes to influence those who are more willing to question these beliefs. 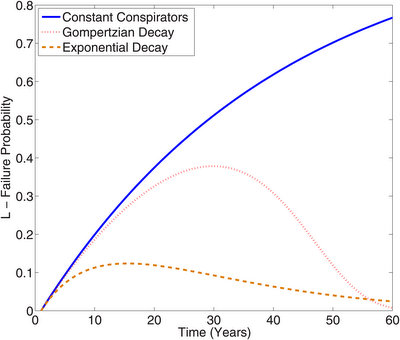 Figure 1 above: Projected failure probability L for a conspiracy of 5000 initial conspirators and p = 5 × 10−6 with different population assumptions. The blue sold line depicts L over time with a constant level of conspirators being maintained. The red dotted line shows a single event with Gompertzian decay of the conspiring population, assuming an average initial age of 40 years old and the dashed orange line shows an exponential decay with number of conspirators being halved every 10 years. In the first case, the likelihood of conspiracy failure always increases with time. In the Gompertzian case, the chances of failure initially increase towards a maximum (L = 0.38 after 29 years in this example), but the death of conspirators with time acts to decrease probability of failure after this. Finally, if conspirators are removed extrinsically, then the curve hits a maximum (L = 0.12 after 14 years) before decaying to lower likelihoods as less conspirators exist to betray confidence. doi:10.1371/journal.pone.0147905.g001.

This article gives a brief overview of a three-way legal battle that is brewing over the thousands of pages of writings left behind by Alexander Grothendieck, on his death in November 2014. The combatants in the case are Grothendieck's children, the French national library, and the University of Montpellier. "Grothendieck's five children are disputing what they say is the paltry valuation of 45,000 euros [approximately US$50,000] placed on at least 30,000 pages of the documents by the Bibliothèque Nationale de France," the article says. "They are also disputing the claim of the University of Montpellier to own another 20,000 pages given to Grothendieck’s alma mater by a former pupil in 2012." Whether the papers contain mathematical work is unclear. In the last 25 years of his life, Grothendieck lived as a recluse in a village in the Pyrenees and devoted himself to thinking and writing, often about spiritual matters. He was a brilliant writer and an iconoclastic thinker, so hopes are high that his writings will contain much of interest. The article notes that wealthy universities in the United States are eyeing the Grothendieck papers with interest and "open cheque books."

On a mathematical tour of Picasso and Pollock, by Claudia Clark.

In his December entry to The Huffington Post, mathematician Dan Rockmore writes about two Manhattan art shows that "bring together mathematics and art in wonderful ways." The first is the Frank Stella retrospective at the Whitney Museum of American Art, and the other is a three-part show at The Nancy Hoffman Gallery. In this post, Rockmore discusses three more Manhattan exhibits, each of which can be found at The Museum of Modern Art (MoMA). The first, Endless House, Rockmore describes as "a lovely small show of architectural models that includes homes inspired by and even named for the fundamental mathematical objects the 'torus' (Preson Scott Cohen's 'Torus House') and a Möbius band (the Bos/van Berke Moebius house)." The second exhibit contains approximately 50 Jackson Pollock works from the early 1930s to the early 1950s. Rockmore writes about Pollock's "drip paintings" and the 1995 work of physicist Richard Taylor, who used the mathematics of fractal geometry to study (and authenticate) these paintings. The third is an exhibit of more than 100 sculptures created by Picasso, one of the founders of cubism. Rockmore makes a link between the turn-of-the-century discovery of special relativity--and the subsequent popularization of four dimensions--and many cubist early works, including Picasso's "Guitar."

Media coverage of the 2016 Joint Mathematics Meetings, by Rachel Crowell

The Joint Mathematics Meetings (JMM), the largest mathematics meeting in the world, were held by the American Mathematical Society (AMS) and Mathematical Association of America (MAA) on January 6-9, 2016 at the Washington State Convention Center in Seattle.
Several media outlets covered the event. Here is a summary of the coverage:
*General JMM coverage

*Who Wants to Be a Mathematician (WWTBAM) competition coverage

On slicing pizza, by Rachel Crowell 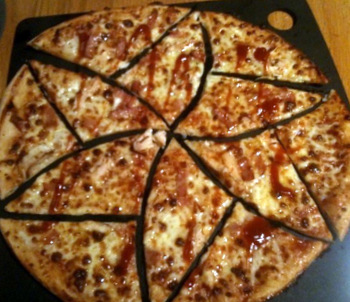 Imagine serving homemade pizza to a group of children with strong preferences about crust and toppings. All children in the group will be aware of the amount of pizza given to each child. You wonder: Is there a way you can slice the pizza that will result in equal-sized pieces with different properties based on what each child wants?  Yes (an example is pictured above). A recent article in New Scientist describes how mathematics--specifically monohedral disk tiling--can help you tackle this problem in a few simple steps, as shown in the chart below: 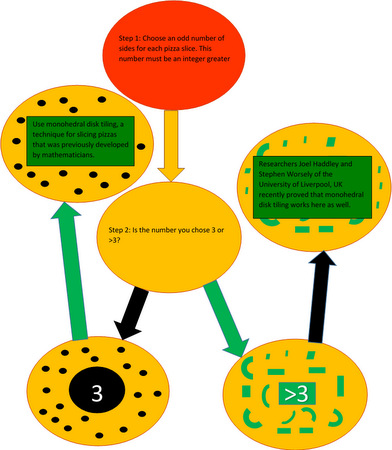 First, you must decide on an odd number of sides that you want each of your pieces of pizza to have. The curved pieces are described by the number of sides they have. For example, if you want to cut the pizza into five-sided slices, your slices with be 5-gons. This pattern continues. Joel Haddley told New Scientist, "Mathematically there is no limit whatsoever" to the number of sides your slices can have, but the logistics of exceeding 9-gon slices may be challenging.

Haddley told New Scientist that while he has used the results of his work with colleague Stephen Worsley to slice real pizzas, he is unsure if there are other applications of their results.  For now, we can all at least rest assured that there are ways to divide a pizza equally among people who want their slices to have different properties.

I dare you to try this interesting technique the next time it’s your turn to slice a pizza.

Math in Discover's Top 100 Stories of 2015, by Lisa DeKeukelaere

These three entries, "Randomness to Order," "Drinking Up Math's Moonshine," and "Pentagon Puzzler," in Discover Magazine's "Top 100 Stories of 2015" tell of obscure but interesting mathematical steps forward this year. "Randomness" describes the work of three Princeton researchers who upended an earlier theory that circles pushed together on a flat surface would eventually reach a hexagonal pattern. By imagining the circles on a shrinkable pad of rubber, they found a new, looser grouping that opens up new possibilities for understanding shape packing and creating devices to reflect specific wavelengths. "Moonshine" tells of advances in finding links between number theory functions and "monster groups" of symmetries. In the 1970s, mathematicians dubbed such links "moonshine" because the idea sounded crazy. "Pentagon" describes the work of three mathematicians at the University of Washington Bothell who found a 15th type of pentagon that, when fit together, could cover a table top with no gaps; researchers previously thought only 14 types of such pentagons existed, and the new finding could help scientists develop new materials.