On Peter Scholze, by Claudia Clark 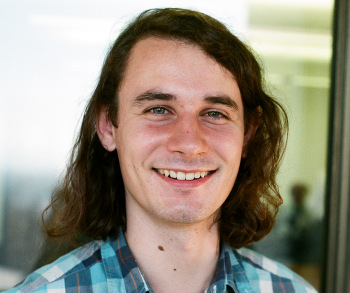 At the age of 14, he was teaching himself college-level math. At 16, he was teaching himself the mathematics necessary to understand Andrew Wiles's proof of Fermat's Last Theorem. In college, he began studying arithmetic geometry, and, as a graduate student, he wrote a 37-page paper that redid "a 288-page book dedicated to a single impenetrable proof in number theory." Meet 28-year old mathematician Peter Scholze, a professor of mathematics at the University of Bonn in Germany, who has since "risen to eminence in the broader mathematics community," according to profile writer Erica Klarreich. "Scholze's key innovation--a class of fractal structures he calls perfectoid spaces--is only a few years old, but it already has far-reaching ramifications in the field of arithmetic geometry, where number theory and geometry come together." And it's this "unnerving ability to see deep into the nature of mathematics" that colleagues find particularly remarkable: "Unlike many mathematicians," Klarreich notes, "he often starts not with a particular problem he wants to solve, but with some elusive concept that he wants to understand for its own sake. But then, the structures he creates 'turn out to have applications in a million other directions that weren't predicted at the time, just because they were the right objects to think about,'" according to number theorist and collaborator Ana Caraiani. (Photo: Peter Scholze, recipient of the 2015 AMS Frank Nelson Cole Prize in Algebra and European Mathematical Society Prize at 7ECM. Photo by G. Bergman.

On remedial math, by Mike Breen

A team in the City University of New York system studied the effectiveness of remedial math courses, which are the "single largest academic block to college graduation in the United States," according to the study's lead author Alexandra W. Logue. About 900 entering students who needed remedial math were randomly assigned to one of three courses: a non-credit remedial algebra course, a remedial algebra course with workshops for extra help, and a college-level statistics course that also had workshops. More than half passed the statistics course, a little less than half passed the remedial course with workshops, and about 40% passed the course without workshops. The results don't seem too surprising--having a workshop that offers help ought to increase pass rates--and it's not obvious that pass rates in algebra are the same as the rates for statistics, but the leaders of the study hope that the results will show colleges and universities that there are other options for students besides remediation. As for long-term benefits, the study found that 57% of the group who took the statistics course had satisfied the school's quantitative general education requirement by their third semester, compared with 16% of those who took remedial algebra. The study was published in Educational Evaluation and Policy Analysis.

On infinity, by Annette Emerson

Mutalik offers three puzzles to "test whether the concept of infinity has purchase in the physical world." He writes that "the infinity assumption can give qualitative answers that are not quite correct in the real world," and he presents the puzzles to demonstrate that "better or at least more useful answers can be obtained if we just stick to very large or very small quantities." He poses: 1. Can a number that is finite but very large substitute for infinity?, 2. What if there are physical limits to the smallest measurable amount of space?, and 3. How sharp is a geometric focus in the real world? This last puzzle is demonstrated in this video by Alex Bellos, who creates an elliptical billiard table to demonstrate how a ball will always go in a pocket if hit from a specific point to anywhere on the edge of the table. Mutalik concludes, "I hope these questions give you new insights about the contrast between infinity in mathematics and the physical world."

Connecting the dots, by Allyn Jackson 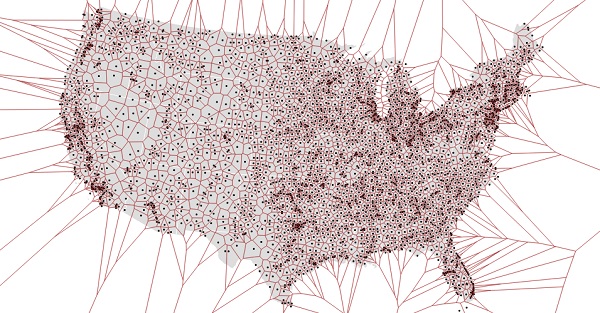 On Evelyn Boyd Granville and her place in the space race, by Samantha Faria

Much attention has been given recently to Katherine Johnson and her role at NASA as an early female African American mathematician. An upcoming feature film, "Hidden Figures," showcases the accomplishments of Johnson and six other pioneering women mathematicians. Unfortunately, Dr. Evelyn Boyd Granville was not one of the women included. This article shines a light on Granville and her contributions to the Space Race. Her work focused on orbit computations and computer procedures for multiple space related projects, including Project Apollo, which led to a successful moon landing. "Fortunately for me as I was growing up, I never heard the theory that females aren’t equipped mentally to succeed in mathematics... Our parents and teachers preached over and over again that education is the vehicle to a productive life," Granville once wrote. She followed her parents advice and became the second African American woman to earn a PhD in mathematics. Later on in her career she guided two of her students to doctoral degrees of their own. One of whom was honored by the Association for Women in Mathematics by having an award named for her, the Etta Z. Falconer Lecture. 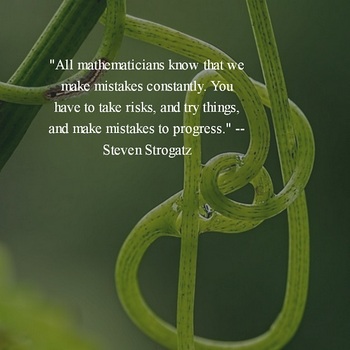 This article is an interview with Steven Strogatz, a professor of applied mathematics at Cornell University. Strogatz is first asked about where his interests in chaos theory lie: "In broad terms, the question of how order emerges out of chaos.... And I love the idea that things can organize themselves.... All this kind of unfolding of structure and organization all around us and inside of us, to me, is inspiring and baffling." This leads him to discuss what has been learned about the best strategies to use to win the Prisoner's Dilemma game. He then responds at length to the statement: "Many people say math is boring." Strogatz thinks that "much of school is about... teaching kids the answers to questions they're not asking," and he feels "bad about that because teachers are stuck: they're supposed to do what they are doing.... But math is especially tough because there is a lot of jargon, a lot of unfamiliar ideas [and] people do have to concentrate." However, "many people do like using their minds to solve logic puzzles or crossword puzzles or brain teasers.... And even though math can be difficult, so what? A lot of things can be difficult." He hopes "that bright or creative people go into teaching and are rewarded for doing it." Other topics of discussion include what it means to say that a proof is "elegant"; how describing math as "beautiful" may alienate the average person, who may not have that experience, but still feel satisfied when they work out a math problem; how some of the math that we take for granted today would have been impossible for the best mathematical minds in earlier times; and a description of a math course for liberal arts students, developed at Westfield State, that he enjoys teaching.

On Danica McKellar identifying as a mathematician, by Samantha Faria

After starring in a very successful television show, Danica McKellar was interested in transitioning to something new, something away from Hollywood. She headed to UCLA intending to major in film studies and focus on finding out who she was now that her show had ended. Despite earning a 5, the top score, on her advanced placement calculus exam, McKellar still felt insecure with her mathematical aptitude. Her outlook changed, though, after doing exceptionally well on her first college math test. Instead of always being recognized as Winnie Cooper, her former tv show character, McKellar was now getting attention for her math abilities. This achievement changed her identity, she realized that she could be "smart and capable and valuable for something that had nothing to do with Hollywood."

McKellar was recently featured in NOVA’s Secret Life of Scientists and Engineers. In the video she tells the story of her mathematical journey. Now in to its fifth season, many different types of scientists and engineers share their own experiences, including accomplished mathematician, Maria Klawe.

On the fluid dynamics of coughs and sneezes, by Rachel Crowell

In the Fluid Dynamics of Disease Transmission Laboratory at MIT, Lydia Bourouiba, Esther and Harold E. Edgerton Assistant Professor, literally gives people something to sneeze at. According to this article, she uses an instrument to tickle the noses of study participants so she can record video of their sneezes. She then analyzes the video to learn more about certain aspects of sneezes, such as how big the droplets that come out of a person's mouth are, how fast the droplets travel, and the pattern in which they travel.The goal of Bourouiba's work is to provide a foundation in math and physics for epidemiology and public health, especially when it comes to decision-making. She told Cori Lok of Nature that when it comes to decisions in these areas, "we want to be giving recommendations that are based on science that has been tested in the lab."

In the past, Bourouiba's research focused on determining droplet size distributions during coughs and sneezes. She took videos of coughs and sneezes from healthy study participants and found that droplets came out of people's mouths in what Lok calls a "turbulent, buoyant cloud." Bourouiba found that bigger droplets can travel eight meters if they originate from a sneeze and six meters if they come from a cough. These findings suggest that if a healthy person is on the other side of a room from a sick person who is coughing or sneezing, airborne fluids from the sick person may still reach the healthy person.

Bourouiba has only studied video of the coughs and sneezes of healthy people, but that is about to change. Her team is getting ready to move into a new lab with a biosafety level 2+ containment room. In this lab, she will be able to study the coughs and sneezes of people with colds and the flu. Ultimately, Bourouiba wants to create a mathematical model based on her data that could be used by public-health officials to determine the ways certain diseases spread, whether the diseases contaminate the air or surfaces, and ways to minimize risks of disease spread in hospitals. (Image: Prof. L. Bourouiba, MIT.)

See "Where Sneezes Go," by Corie Lok, Nature, 2 June 2016, page 24. Hear more about her work in this Mathematical Moment podcast.

On computers replacing humans in math, by Allyn Jackson

This article was inspired by an article in Nature on 26 May 2016, which reported on the largest-ever computer proof in mathematics. Three researchers used tremendous computing power to prove the "Boolean Pythagorean triples problem," which had been open since the 1980s. Borwein and Bailey discuss the phenomenon of huge computer calculations in mathematics and then pose the question: "Are research mathematicians soon to join the ranks of chess grandmasters, Jeopardy! champions, retail clerks, taxi drivers, truck drivers, radiologists and other professions threatened with obsolescence due to rapidly advancing technology?" And they answer it: "Not quite." They predict that computers, rather than replacing mathematicians, will become an increasingly important component of the mathematician's toolkit.