On Sophie Bryant, by Samantha Faria

Born in 1850, Sophie Bryant was raised in a home that valued education: her father was a mathematician, a fellow of Trinity College Dublin and later Chair of Geometry at the University of London. Unsurprisingly, Bryant won a science scholarship for college and later began teaching other young women. Although married at an early age, her husband passed away after only a year of marriage. Rather than remarry, she spent her life committed to education and published books on a variety of subjects, including Irish history, religion, education, women’s rights, and philosophy. She was the third woman elected to the London Mathematical Society. Sadly, in 1922 her life was cut short during a “walking holiday” in France.

On Maya DiRado, by Samantha Faria

Maya Dirado has been known in the competitive swimming circuit for years but since the Rio Olympics she's now a household name. Her speed, effort and fortitude helped her bring home four Olympic medals: two gold, one silver and a bronze. Unlike some athletes who are driven by a single goal, Dirado has spent her life perfecting whatever it is that she is working on. This internal effort led her to a perfect math score on the SATs (and the PSATS), a degree in management science and engineering from Stanford, and an upcoming career as a business analyst. She once said, "It's about going to practice every day and trying as hard as you can... If you do that, it will give you the results." It seems as though she has applied this strategy to every area of her life.

On Barry Simon, by Samantha Faria 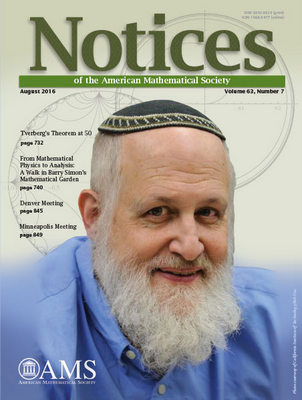 Although gifted as a child, a career as a mathematician was not necessarily Barry Simon's goal. Simon says his "biggest influence was his high school physics teacher." Through hard work, curiosity, and a deepening interest, he has been able to work successfully in both math and physics. Known as one of the founders of modern mathematical physics, Simon was awarded the 2016 Leroy Steele Prize for Lifetime Achievement. Accordingly, he has a long list of contributions and accomplishments under his belt in both of these fields. At 70 years old, Barry Simon is not slowing down. Despite his recent retirement from academia, he has three books in development, various research projects underway, and has begun an online "Selecta" where he annotates his papers with important notes.

On moonshine and string theory, by Rachel Crowell

The proof of the Umbral Moonshine Conjecture in 2015 showed that 23 moonshines--structural connections between symmetry groups and mock modular forms--exist. Mock modular forms are a class of fundamental objects in number theory.

Miranda Cheng, an assistant professor at the University of Amsterdam on leave from the National Center for Scientific Research in France, is developing K3 string theory. The theory is important to understanding umbral moonshines. This is a version of string theory in which the geometry of space-time is that of a K3 surface. Article author Natalie Wolchover describes K3 surfaces as, "possible toy models of real space-time."

Cheng and other string theorists hope that by probing the properties of the K3 model using what they know about the 23 moonshines, they will be able to understand the physics of aspects of real life that can’t be observed directly, such as that inside black holes. One mystery she would like to try to solve is the information paradox--or the question of how quantum information is affected when it enters a black hole. Cheng says her research is, "on the boundary between physics and mathematics." She discusses this further in the video below.

On randomness, by Claudia Clark 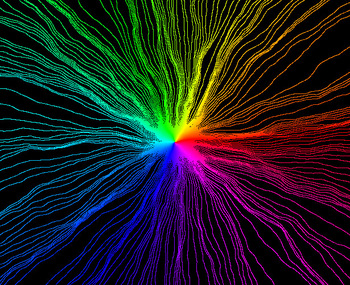 In this article, writer Kevin Hartnett discusses the work done over the past few years by MIT professor of mathematics Scott Sheffield and University of Cambridge professor Jason Miller, who "have shown that random [two-dimensional surfaces] can be categorized into various classes, that these classes have distinct properties of their own, and that some kinds of random objects have surprisingly clear connections with other kinds of random objects." Hartnett begins the article by having the reader visualize random two-dimensional geometries by considering the trajectory that would be made by a plane flying over increasingly random fluctuating surfaces: the path becomes "nearly incoherent"…but not incomprehensible, he adds. "In random geometry, if you know the location of some points, you can (at best) assign probabilities to the location of subsequent points. And just like a loaded set of dice is still random, but random in a different way than a fair set of dice, it's possible to have different probability measures for generating the coordinate values of points on random surfaces." Hartnett continues: "What mathematicians have found--and hope to continue to find--is that certain probability measures on random geometries are special, and tend to arise in many different contexts." The random walk was "the first kind of random shape to be understood in this way," Hartnett writes. Decades later, two complementary perspectives developed in parallel to study two-dimensional random surfaces: Liouville quantum gravity (LQG) and the Brownian map. LGQ "gave physicists a way of defining a surface's angles so that they could calculate the surface area." On the other hand, the Brownian map "has a structure that allows researchers to calculate the distances between points." And in 2013, Sheffield and Miller "set out to prove that these two models described fundamentally the same thing."

Image courtesy of Scott Sheffield. Each ray represents the trajectory an airplane would take if it started from the origin and tried to fly as straight as possible over a randomly fluctuating geometric surface.