A Farewell to Numberplay, by Claudia Clark

After seven years, Gary Antonick has published his last Numberplay column in The New York Times. In this final column, Antonick writes about how his thinking about the nature of problem solving has changed as a result of working on this column. In fact, he notes, "we're also in the middle of a revolution in the understanding of insight. The disciplines of decision-making and problem-solving are being completely transformed... Tools for perspective-shifting—for asking new questions as opposed to solving existing problems—are much more clear," he writes. "Among these tools is the ability to shift between problem-solving levels." He illustrates this by showing the ways in which a typical person, who falls into the category of the Casual Solver, the Technician, or the Mapmaker, solves the following problem: A ball and a bat cost $1.10. The bat costs $1.00 more than the ball. How much does the ball cost? At one point, Antonick says, it was believed that only Technicians were worth studying. "The Casual Solver approach was just dismissed as sloppy thinking, and the Mapmaking approach was seen as too individualistic or imprecise," he explains. "We're now in a transformation period in problem-solving, where all three personalities are being recognized as important."

On math and psychiatry, by Annette Emerson

Psychiatrist Joshua Gordon is the new director of the U.S. National Institute of Mental Health (NIMH). He'll oversees the agency's $1.5 billion budget and direction. His priorities include "low-hanging clinical fruit, neural circuits and mathematics--lots of mathematics." In this interview he notes the development of "incredibly powerful tools to observe and alter activity in a subset of neurons... allowing us to get a questions of how neural circuits produce behavior." He explains some short-term applications, "medium-term pay-outs" (safe treatments for psychiatric disorders in humans), and long-term goals (including, ultimately, a change in mental-health care). "Fully characterizing each of these levels and then integrating them across scales requires a level of mathematical rigour that most of us, including myself, have not really brought to bear on the problem.... It's just a question of appropriate training in math for students.... We need to inject more math into every level of the NIMH portfolio. Math can also have a short-term impact in psychiatry for things such as predicting individual responses to drugs and improving precision medicine more generally. "< /p>

See "US mental-health chief: psychiatry must get serious about mathematics," by Alison Abbott, Nature, 26 October 2016.

On math and taffy pulling, by Claudia Clark

In this article, writer and former Math Digest contributor Evelyn Lamb describes the work of University of Wisconsin-Madison applied mathematician Jean-Luc Thiffeault, who uses topological dynamics and pseudo-Anosov mappings to model taffy pulling. (If such work seems less than critical, consider that "the same mathematics?has more serious applications: many industrial processes, including glassblowing and drug preparation, require viscous fluids to be mixed in ways that are more like pulling taffy than stirring cream into coffee," writes Lamb. In Thiffeault's words, "If you're trying to stir really viscous things, like pharmaceutical industry pastes, you can't just shake them. It's not like mixing paint.") While Thiffeault has long seen the connection between taffy pulling and viscous mixing, his exploration of the history of taffy-pulling machines is recent: his paper "A mathematical history of taffy pullers," which describes the results of his work studying the mathematics behind various taffy-puller patents, was published in July. In addition, "Thiffeault's research?inspired him and his undergraduate student Alex Flanagan to build their own model," notes Lamb. "The 6-rod device, which is still only a prototype, stretches taffy about twice as much as the standard pullers in each cycle." 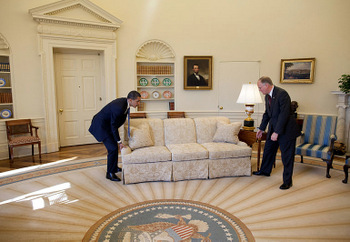 In this article, Avery Thompson discusses five simple, unsolved math problems. They are: 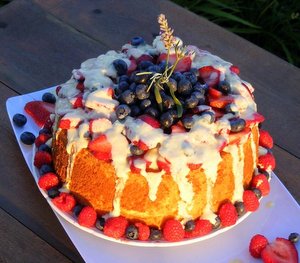 It is possible to divide a cake among a group of people in an "envy-free" way, according to two young computer scientists who recently published their results. Simon Mackenzie (a 27-year-old postdoctoral researcher at Carnegie Mellon University) and Haris Aziz (a 35-year-old computer scientist at the University of New South Wales and Data 61, an Australian data research group) make up the team. Envy-free cake cutting isn’t just about dividing the cake into slices that are each the same size. Envy-free cake cutting incorporates the notion of dividing a cake that has different features among people who value those features differently. This concept applies to other real-world situations where a continuous object--such as a tract of farm land--needs to be divided among people who assign different values to the varied features. For example, one person might want a tract of land that has a lot of trees but the most important feature to another person could be an abundance of wildflowers.

Since Biblical times, the rule for making such a division fair has been to let one person decide where the division should be and let the other person decide which piece of the divided object they want. In the case of a cake, one person would cut the cake and the other person would choose which piece they wanted. This works for two people but until Aziz and Mackenzie’s algorithm, it was thought that it would not be possible to develop a bounded, envy-free algorithm for dividing a cake among n people. The pair changed that by building on a procedure for envy-free cake cutting among three people that was independently devised by mathematicians John Selfridge and John Conway in 1960.

See "How to Cut Cake Fairly and Finally Eat It Too," by Erica Klarreich, Quanta Magazine, 6 October 2016.

On mathekniticians, by Claudia Clark 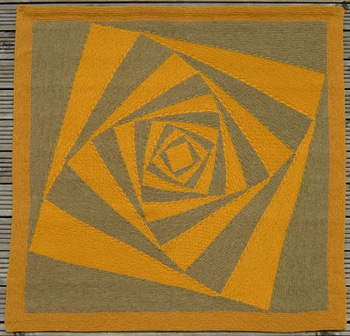 In this article, writer Alex Bellos writes about the work produced by married couple Pat Ashforth and Steve Plummer, recently retired math teachers, who "have been knitting and crocheting mathematical images and objects for more than two decades." The article is filled with pictures of their colorful two- and three-dimensional creations, including afghans, hexaflexagons, polyominoes, and a cube composed of eight smaller cubes that they have named an "octopush." Each piece demonstrates a mathematical concept or proof: one afghan uses color to represent the factors (from 1 to 10) of the numbers 1 to 100; another afghan shows 3 superimposed Sudoku patterns; and a cushion cover illustrates a geometric proof of the Pythagorean theorem. "Originally," writes Bellos, "the afghans were hung in their classrooms. 'They were an invaluable as a vehicle for talking about maths,' says Ashforth." Part of the enjoyment Ashforth and Plummer derive from their work is "working out how [an idea] can be made into an afghan in a way that would be easy enough for anyone else to recreate. It is like trying to solve a puzzle and refining it to give the best possible solution." (Their patterns are available for sale.) Another source of enjoyment is seeing "the effect we have had on children, either directly by them seeing our big colourful blankets and suddenly understanding something they had previously struggled with, or because other teacher have used our ideas…to help teach maths in an unconventional way. And influencing the lives of so many (most often women) math-phobics who would not dream of becoming involved with anything mathematical in other circumstances." Image: "Curve of Pursuit," by Pat Ashforth and Steve Plummer, Woolly Thoughts.

See "Meet the mathekniticians - and their amazing woolly maths creations," by Alex Bellos. The Guardian, 3 October 2016.

On math and credit scores, by Claudia Clark 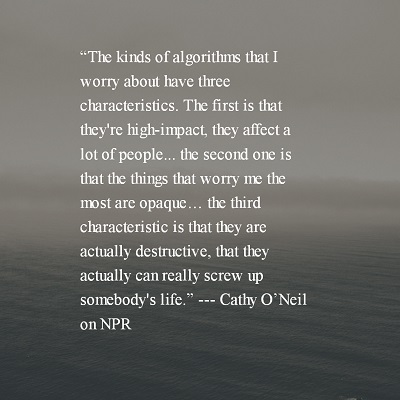 In this article, adapted from her recently published book of the same name, mathematician and former Wall Street "quant" Cathy O'Neil takes a sober look at what she calls WMDs, or Weapons of Math Destruction: the models and algorithms that have unintentionally "encoded human prejudice, misunderstanding and bias into the software systems that increasingly manage our lives." Take, for example, the means by which people are determined to be creditworthy. Before Earl Isaac and Bill Fair came up with a model for assessing risk, called Fair, Issac, and Corporation (FICO), a person's eligibility for credit was determined by another human being, with his or her own conscious or unconscious biases. A person's FICO score, on the other hand, "was fed by a formula that looked only at a borrower's finances--mostly his or her debt load or bill-paying record." O'Neil notes that "these scores have lots of commendable, non-WMD attributes," including a clear feedback loop and relative transparency. Now, however, "the use of scoring has proliferated wildly" and many of the models used to predict our creditworthiness are "arbitrary, unaccountable, unregulated and often unfair." O'Neil also argues that using credit scores in making decisions about employment is unfair: "Framing debt as a moral issue is a mistake. Plenty of hardworking and trustworthy people lose jobs every day as companies fail, cut costs, or move jobs offshore." And, even with the Affordable Care Act, she points out, the loss of employment often means the loss of health insurance. "'The more data, the better' is the guiding principle of the Information Age," O'Neil concludes. "Yet in the name of fairness, some of this data should remain uncrunched."