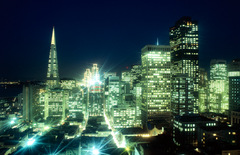 Despite the considerable variety among cities, researchers have identified common mathematical properties that hold around the world, regardless of a city’s population, location or even time. This recent discovery is based on data collected from thousands of cities, and on the application of standard and fractal geometry to the social and physical aspects of cities. Demonstrating why there exists such a range in the sizes of cities, each of these properties turns out to be a power law, in which quantities such as the number of patents generated in a city or the total length of its paved roads vary with a city’s population raised to a certain power. For the number of patents, the power is bigger than one (the greater number of interactions leads to proportionally more inventions) while for the length of paved roads the power is less than one (proportionally fewer new roads are needed as the population grows).

The foundation of the laws that relate various city parameters is human interaction and, specifically, the properties of social network graphs, which form the basis for the necessary developing infrastructure. And although increasing a given population results in an even greater increase in creativity, a larger population can cause more unwanted outcomes, such as increased traffic and crime. As our planet becomes more urbanized, researchers hope that a better understanding of cities and of the mathematical rules that govern them will help counteract potential undesirable effects and magnify their benefits. So while mathematics cannot guarantee a utopia, it can generate a new understanding of the environments in which most of us now live and help city planners analyze and decide about proposed strategies for future growth.