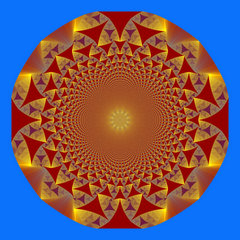 Sand is fun to dig in and sculpt but it has also provided the inspiration for a hot topic of study--how computer-generated “sandpiles” on a grid topple and change shape. The piles are modeled using a simple rule, such as: As sand is added, piles that become four grains tall topple and transfer their grains to their nearest neighbors in the four compass directions. Then these neighboring piles (which may have been three grains tall before) could now be four grains tall themselves and so topple and transfer to their nearest neighbors, which might topple, transferring to their nearest neighbors, and so on. Such a simple rule can still lead to amazingly intricate fractal patterns, like this one, which was generated by a billion grains of sand. Although inspired by sand, the model reflects the behavior of many systems, from networks of neurons to forest fires.

The simple sandpile rule leading to complex behavior is an example of self-organized criticality in which systems, regardless of their starting points, appear destined to get to a threshold at the boundary between total chaos and constancy. With enough sand, piles evolve toward a state with an average of a little over two grains per pile. Toppling still occurs at this level, but there is some pattern to the activity. In a taller system, at three grains per pile (for example), adding a single grain anywhere triggers a systemwide avalanche. Researchers are currently using geometry and partial differential equations to characterize the properties of self-organized critical systems. Knowing these properties will help in our understanding of the systems in fields from financial markets to the cosmos, and perhaps to the foundation of life itself.