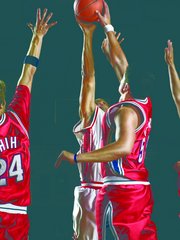 For some observers the question is, "Is this ever going to end?" but most sports fans want to know, "How is this going to end?" A team of researchers used a mathematical idea known as a random walk to model the way scoring leads grow and shrink over the course of a game in a competitive team sport. They found that the likelihood that a lead of L points is "safe" (that is, will not be eliminated) with t seconds left in the game can be calculated with expressions involving exponential and trigonometric functions. This formula predicts that in basketball, a lead of 10 points with about eight minutes remaining, or of 18 points at halftime, is 90% safe.

It may seem strange that important game characteristics could be associated with anything random, especially given the skill levels of professional players. Yet, using comprehensive data on more than 10,000 professional basketball games, the researchers showed that their formula is remarkably accurate, correct about 95% of the time. The researchers also tested the formula with data from several other sports and showed that its accuracy declines slightly as the number of points/ goals scored in a game decreases.