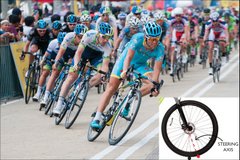 Although bicycles are fairly simple, they involve some interesting questions that have remained unanswered for more than a century, such as: what forces keep a bike stable, and why does a moving riderless bike balance itself (for as long as its speed is maintained)? Mathematicians, physicists, and engineers are using models involving differential equations, geometry, and linear algebra to answer such questions and to experiment with new designs that may be more easily balanced and steered than the one we’re used to.

The current bicycle design evolved from trial and error rather than from rigorous analysis. When researchers recently employed mathematics and mechanics to generate equations describing the system’s main components--the wheels, the frame, and the steering fork--they made a discovery contradicting the long-held assumption that to achieve stability, the point of contact between the front wheel and the ground must be behind the steering axis [see inset]. First the math, then the experiments verified that a bike that violated the assumption could still be stable. Now that the researchers have accurate equations to characterize bicycle motion, they can explore new concepts, using computers or paper-and-pencil, which will help guide future bicycle innovations.