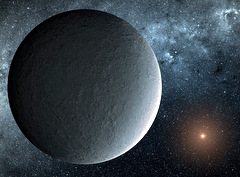 In the last 20 years, more than 3,000 exoplanets (planets outside the solar system) have been discovered. The smaller the planet, the harder it is to find, but even from light years away, today’s telescopes can often spot the dimming of a star when a planet crosses in front of it. This is the most successful method of finding exoplanets, but other methods, such as detecting the effect of a planet’s gravitational pull on a star, are used as well. Astronomers then use sophisticated instruments and math, such as algebra, trigonometry, and calculus, to estimate the planet’s mass, its velocity, the inclination of its orbit, and the composition of its atmosphere. More advanced math helps extract the important information and filter out the noise that is inevitable when gathering data from such a distance.

Closer to home, astronomers are searching for a ninth planet in our solar system. Although it has not been seen, its existence is based on a mathematical model that explains the clustering of the orbits of some of the objects in the Kuiper Belt, a collection of "icy" objects beyond Neptune. It’s too soon to say that the planet is there, but both theoretical explanations and numerical simulations support the claim. The ultimate proof will be seeing it through a telescope, but the purported planet takes 15,000 years to orbit the sun and is now thought to be about as far away from us as possible, which means visual confirmation won’t be immediate. Researchers are gathering more data on Kuiper Belt objects, as well as scanning the skies, so that even though it may take years, eventually we’ll know whether it’s Planet Nine or "Planet? Nein."