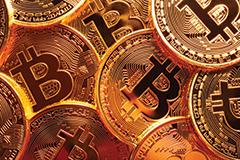 Many transactions are done online, but most are based on standard currencies. Bitcoin is one example of a digital payment system, or cryptocurrency, that exists only electronically, preserves its users’ anonymity, and has no central player such as a bank or government in control. It relies on a network of shared computers to process and verify each transaction, each of which is encrypted using mathematical formulas and entered into an electronic ledger, called a blockchain. The blockchain connects transactions and ensures that a bitcoin owner can’t spend the same unit of value ("coin") twice. Each bitcoin owner has a private number that the mathematical formulas make easy to use but impossible in practice to discover. Thus, although bitcoins may seem less secure than hard currency, they are far less vulnerable to theft or counterfeiting as long as the private number is kept secret.

The blockchain is an idea that has many potential applications, such as shipping. Currently, completing and keeping track of tax and customs documents can cost as much as the shipping itself. Furthermore, paper documents can be tampered with or suddenly disappear. The math behind the blockchain--e.g., public key cryptosystems, one-way hash functions, and computational complexity of proof of work--would allow shippers not only to track a product on its journey but also to keep secure, digital, unalterable records of the necessary documentation. And big companies aren’t the only ones interested in using blockchains. Refugees, who are often understandably reluctant to register their identities with governments, have created their own emergency IDs, which are recorded in a blockchain, allowing separated family members to connect electronically and eventually eunite physically without revealing themselves to potentially hostile government organizations.