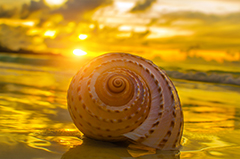 Mollusks are not known for their math skills, but there is mathematics behind the beautiful patterns in their shells. Using differential geometry--the study of curves and surfaces--a team of mathematicians found that many shells are formed by three simple processes in the mantle (which generates the shell): expansion, rotation, and twisting. Expanding and rotating form a shell like the one pictured, with an increasingly larger opening that traces a spiral pattern. Adding a twist yields shells that look like spiraling towers or elaborate horns.

The team also discovered an explanation for why some shells have spikes. The spikes form perpendicular to the shell opening during mantle growth spurts, when the mantle isn’t perfectly aligned with the shell opening. The misalignment results in an instability, a bulge that is amplified as the shell grows. The team verified this and other mathematical models by measuring the growth of real shells and comparing the patterns they observed with the mathematical predictions. There are still several questions left to answer, though, such as how do some spine patterns become fractallike, and why do the vast majority of shells coil clockwise?