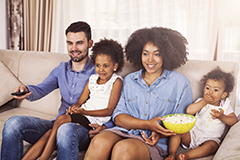 When did you last pay a late fee for a video you watched at home? Whaaa? In the early days of video rental, videos came from a store and were due back at a certain date and time. One person cofounded a company that revolutionized the video industry and eliminated late fees. The idea behind the company came from a graduate school math problem related to bandwidth: What’s the carrying capacity and cost of a station wagon carrying tapes across the US? The solution to the problem showed that at the time videos could be delivered by mail cheaply, with no need to visit a store and no need for late fees, so long as you didn’t keep too many movies out at once. Mail was the delivery system until Internet speeds improved. Now, almost all videos are streamed, and the company that was founded has mil

Math’s role in the company (rhymes with “get flicks”) didn’t end with its founding. A significant part of the company’s model is its recommendations/suggestions for users, which are based on its existing collection of ratings. Yet because less than 1% of views are rated, suggestions for you must be determined using algorithms that involve statistics, graph theory, and trigonometry (which, for example, gives a measure of how similar or dissimilar movies are). The recommendations are so important that the company offered a million-dollar prize for an algorithm that would improve its recommendation system by at least 10%. After about three years, a winner finally emerged, complete with a Hollywood ending: two teams’ algorithms had essentially the same performance--10.06% improvement--but the winning team had submitted its entry just 20 minutes earlier!

For More Information: The Power of Networks, Christopher G. Brinton and Mung Chiang, 2017.