Probably no answer in the back of your math book looks like the image below. Yet that image is an example of mathematics. It was created by repeatedly applying a simple geometric transformation, analogous to inverting numbers, on circles (starting with inverting the five large outer circles into the center circle). Math may sometimes seem as if it's comprised of countless meaningless unconnected exercises, but in reality, it's much more—it's figuring out how to do something, and, even better, why something works the way it does. The math you're doing now can open doors for you so that you can answer deep questions yourself about a subject or idea that you're interested in. Give those questions a shot and perhaps someday also help others solve their problems. 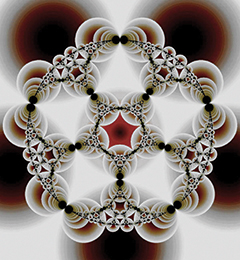 John Urschel, a former professional football player and (as of this writing) current math PhD student at MIT, gives his take on math in this interview excerpt:1

Bernard Goldberg: In football, we all know what the goal is [to win]. What's the goal in math?

John Urschel: To understand. To learn. To push forward.

Goldberg: And when you make the breakthrough and you solve the problem?

Urschel: BEST feeling in the world.

And when you don't understand, it doesn't mean you're not smart, or not a “math person.” No mathematician is born knowing everything or being able to solve any given problem in the blink of an eye. All have to work at it. Every one of them has run into brick walls and knows what it's like to be stuck. But they kept going. So, keep at it—you'll be glad you did.

For More Information: Living Proof: Stories of Resilience Along the Mathematical Journey, edited by Henrich, Lawrence, Pons, and Taylor, 2019.